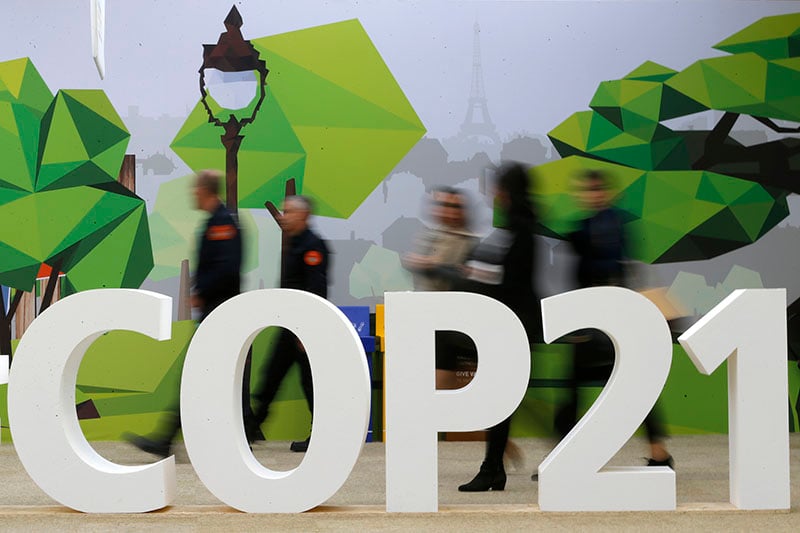 People walk past the COP21 logo in the Climate Generations area during the World Climate Change Conference 2015 (COP21) at Le Bourget, near Paris, on Dec. 1, 2015. Photo courtesy of REUTERS/Stephane Mahe
*Editors: This photo may only be republished with RNS-KAYLOR-COLUMN, originally transmitted on Dec. 2, 2015.

(RNS) As world leaders and diplomats gather in Paris for two weeks of climate talks, many Christians will join them. I will be among them. I view my eight-day journey as a spiritual pilgrimage.

Climate change — and its threat to hundreds of millions of people — stands as a great moral crisis of our time. Famine, displacement of people and even war will rise along with the mercury in our thermometers.

So I will join other Christians from several nations as we offer a collective moral witness:

We must care for this world we call home.

READ: The ‘war’ on Christmas — what would Santa think?

As Pope Francis wrote in “Laudato Si’,” his encyclical on the environment: “We must regain the conviction that we need one another, that we have a shared responsibility for others and the world and that being good and decent are worth it.”

The foundational biblical teaching to “love your neighbor as yourself” drives me to Paris. To selfishly waste carbon while my poorer neighbors in low-lying islands or in drought-scorched lands suffer must count as a sin.

As the generational engagement team leader for Churchnet (a Baptist network mostly in Missouri), a journalist for a couple Baptist publications and a former Baptist pastor, I believe — as the New Testament writer James argued — ”faith without works is dead.”

I taught advocacy studies for several years at a university, so I value an active faith that takes public policy matters seriously. My desire to live out an active moral witness compels me to participate in the public square. I will also be reporting on the conference for EthicsDaily.com, where I’m a contributing editor. I hope my stories, photos and videos will help other Christians experience the strong faith witness surrounding the climate talks.

I look forward to joining Catholic, Orthodox and other Protestant believers to celebrate shared convictions and concerns. Faith-centered events will take place each day of the negotiations, from special worship services (including one at Notre Dame Cathedral) to official presentations. The events and the presence of concerned Christians should send the message that caring for the environment and addressing climate change are spiritual concerns.

The Bible makes it abundantly clear that the Earth is the Lord’s and everything in it and that we are supposed to take care of the planet. Caring for creation is an act of worship. We learn this throughout Scriptures, from the poetry of the Psalms to the preaching of Paul. We cannot sit by and let creation be destroyed and still call ourselves faithful.

I suspect some who reject the clear scientific record on climate change will accuse me of hypocrisy. But we must make sure the voices of consumerist polluters are not the only ones heard.

I have calculated the amount of carbon I will use and made a donation to one of my favorite charities to help offset my trip’s impact. Plant With Purpose, a Christian development organization that works in several countries, will use my donation to plant new trees. These new trees help restore our climate and give new life to farmers and communities. Brian Kaylor is an award-winning writer and the author of “Sacramental Politics: Religious Worship as Political Action.” He is on Twitter: @BrianKaylor. Photo courtesy of Brian Kaylor

When the conference concludes next week, I pray we will see a serious, comprehensive plan to reduce carbon emissions and fight climate change.

Until then, I will be in Paris with other Christians, living out the words Rabbi Abraham Joshua Heschel uttered after joining the Rev. Martin Luther King Jr. in the 1965 Selma march: “My feet were praying.”

(Brian Kaylor is an award-winning writer and the author of “Sacramental Politics: Religious Worship as Political Action.” He is on Twitter: @BrianKaylor.)