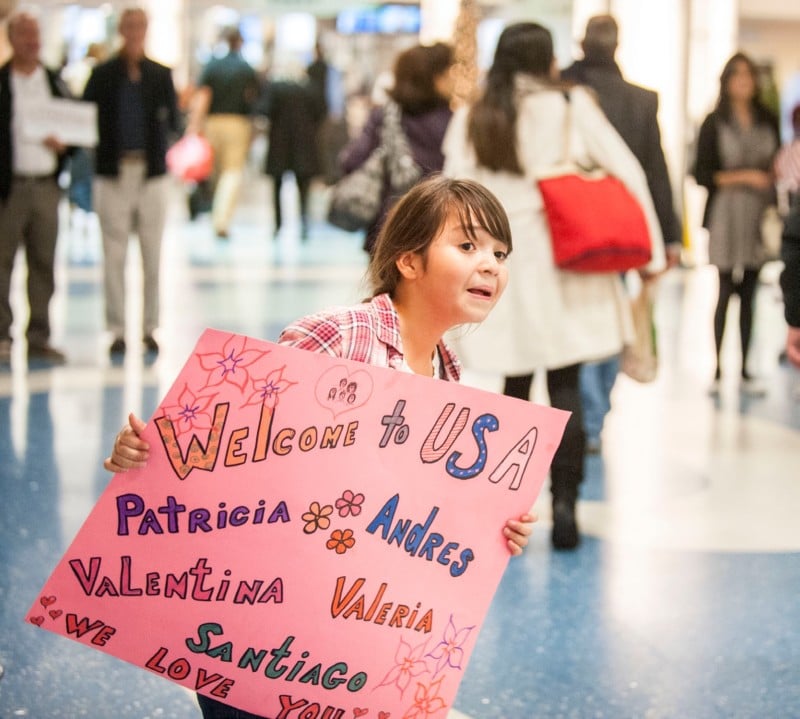 A girl welcomes a refugee family arriving at the airport. Courtesy of USCCB/Sarah Williamson

(RNS) Faith-based agencies that resettle refugees in America stand to gain more than a clear conscience if the United States — after what is expected to be a fierce debate in Congress — accepts a proposed 10,000 Syrian refugees next year.

More refugees also means more revenue for the agencies’ little-known debt collection operations, which bring in upwards of $5 million a year in commissions as resettled refugees repay loans for their travel costs. All nine resettlement agencies charge the same going rate as private-sector debt collectors: 25 percent of all they recoup for the government.

This debt collection practice is coming under increased scrutiny as agencies occupy a growing stage in the public square, where they argue America has a moral obligation to resettle thousands of at-risk Syrian refugees. Some observers say the call to moral action rings hollow when these agencies stand to benefit financially.

“It’s money-producing, and I do find that troubling,” said Ronald Simkins, director of the Center for the Study of Religion and Society at Creighton University. “It adds a perception of conflict of interest. Certainly for their advocacy it can become that. … It becomes in some sense self-serving in the end.”

Moral duty has become a prominent feature of the refugee debate. Example: Lutheran Immigration and Refugee Service has urged the Obama administration to show “moral leadership” by boosting its 2016 Syrian refugee allotment from 10,000 to 100,000. But even 10,000 is uncertain in the wake of the Nov. 13 Paris terrorist attacks and a House of Representatives vote last week to increase security screening protocols for Syrian and Iraqi refugees. A Senate vote on the screening bill is expected in early December.

As resistance to refugees grows, so also do calls for moral action on their behalf. Some refugee advocates are now urging resettlement agencies to help the cause — and boost their own moral authority — by forgoing their 25 percent commissions if possible and letting newly arrived refugees keep that money. So far, none has heeded that call.

“It would be wise, if they can afford it, to let the refugees use whatever resources they have to help their self-sufficiency,” said Eva Millona, executive director of the Massachusetts Immigrant and Refugee Advocacy Coalition. “It would add more credibility.”

Faith-based agencies resettled a majority of the 70,000 refugees who made America their destination in the past year. Next year, the Obama administration aims to raise the figure to 85,000, including 10,000 from Syria, where thousands have fled the brutality of the group that calls itself the Islamic State and a bloody civil war under the Bashar Assad regime.

READ: Obama denounces religious test for refugees: ‘That’s not who we are’

Agencies and their denominations say the Syrian situation calls for a compassionate response to strangers in their hour of need. That stance is not compromised, they say, even when the agencies’ take from collections could increase by six or seven figures. At some (but not all) agencies, the money goes back into refugee support operations.

“By receiving these funds which are not restricted by funder/donor directives, we can work to develop other programs to support our clients,” Terry Holthause, travel loans manager for Lutheran Immigration and Refugee Service, said in an email.

The loans, which are interest-free and extended by the federal government, do not go directly to the refugees. Instead the loans are intended to cover the costs of bringing the refugees to the U.S. and can run up to $6,000 for a large family. Refugees are expected to repay the loans, and when they do, the government only takes 75 percent, letting the agency have the other 25 percent.

Agencies already receive government contracts to cover costs associated with resettling a certain number of refugees in a given year. So the loan collections provide a separate, additional revenue stream.

Some ethicists agree that resettlement agencies have no need to repent or change their debt-collecting ways. These agencies have bills to pay, and charging fees is not unethical, according to Ann Skeet, director of leadership ethics at Santa Clara University’s Ethics Center.

For those working with refugees, debt collection has become a core revenue stream. In 2014, travel loan collection fees brought in $3.4 million at Migration and Refugee Services at the U.S. Conference of Catholic Bishops. Without that sum, MRS would have run a $3.8 million deficit on its $86 million budget, but loan fees kept the deficit under $400,000.

“The percentage that we get out of the travel loans helps to fill in those gaps for a program that is in effect on a shoestring,” Executive Director Bill Canny said. “The travel loans can help to keep programs afloat, to keep staff intact in times when we’re not getting enough refugees to keep staff on board.”

Agencies say they use none of the coercive or intimidating tactics that give debt collection a bad reputation. Loan officers at MRS do not call people when they miss payments, according to MRS Travel Loan Supervisor Leonard Harrod.

Collectors assess no penalties for late payments, and they work with refugees to adjust timetables as needed. Most refugees take five or six years to pay off their loans.

“I can’t tell you how many calls I get or cards I get from clients, thanking us for helping them get on their feet,” Harrod said.

Repayment is effectively voluntary, according to Canny. Even so, some 61 percent of refugees continue to make payments to MRS.

READ: Is the Colorado Planned Parenthood shooting terrorism, a hate crime or what?

In some cases, collections subsidize a church’s various departments and programs. In the Episcopal Church, collections from refugees account for 1.7 percent of budgeted nongovernmental revenues, or $721,000 a year on average. From 2013 through 2015, the haul from refugees was $400,000 higher than expected and helped create a projected $3 million surplus for the church, according to Episcopal Church Treasurer and Chief Financial Officer Kurt Barnes.

At an Episcopal Church board of directors meeting in November, Barnes summed up the process and rationale. He said three staffers at Episcopal Migration Ministries work the phones to collect debt payments from refugees. Their work not only generates funds for the church, he said, but it also helps refugees.

“Some people say, ‘Oh, you’re in the collections business,’” Barnes said. “Yes, but we also prefer to say that we are in the business of providing credit history for new citizens or future citizens.”

Some ethicists say that while agencies and their denominations still have an important moral perspective — even with their 25 percent commissions — they need to be more open about where their money comes from and where it goes.

“You could help refugees build up a credit history but only take 5 percent off the top as a fee for your collecting the loan,” said Wally Siewert, director of the Center for Ethics in Public Life at the University of Missouri-St. Louis.

“What they have to be able to justify is that 25 percent rate. They have to be honest and say: ‘This is what these services have been shown to be worth on the open market, (and) we are using the revenue that they are generating in order to provide all of our services.’ They have to be open about that.”

(G. Jeffrey MacDonald is a contributor to RNS.)