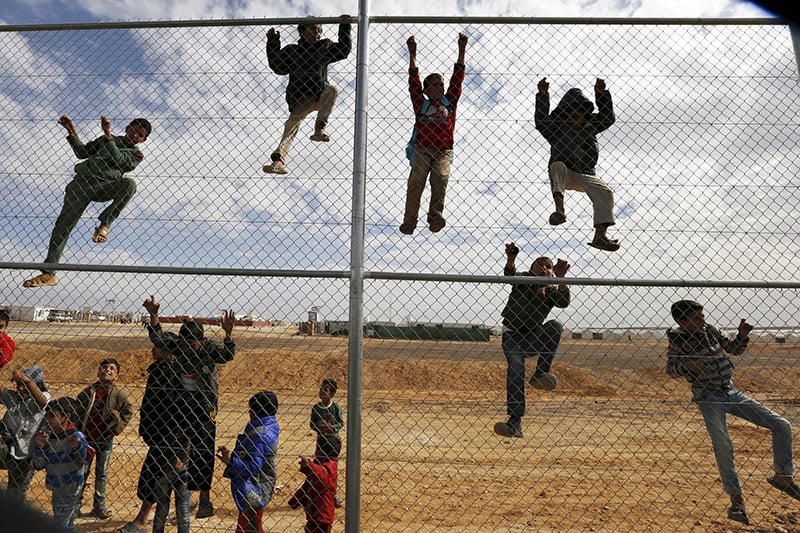 Syrian refugee children climb on a fence to watch a football training workshop at Azraq refugee camp near Al Azraq city, Jordan, on Nov. 16, 2015. Photo courtesy of REUTERS/Muhammad Hamed
*Editors: This photo may only be republished with RNS-EVANGELICALS-REFUGEES, originally transmitted on Nov. 18, 2015.

(RNS) Evangelicals may be united that the Bible is the ultimate source of authority, but they are divided on how the Bible would lead us to respond to the growing crisis of refugees fleeing from Syria.

These are just a few of the questions that evangelicals are grappling with. One evangelical pastor today told me, “My church members are all over the place on this!”

The situation in Syria is dire. More than 300,000 people have died. Half the country is now homeless. Millions are fleeing. The plight of the refugees came to national attention in September with a picture of a 3-year-year-old boy whose body washed up on shore in Turkey. Many evangelical Christians sprang into action, making plans for welcoming and serving the refugees.

READ: 3 facts about the Syrian refugee crisis many Christians overlook

I’ve seen evangelical compassion firsthand. I once served a church in a small town where hundreds of Somali refugees, the vast majority of them Muslim, were resettled.

Our church opened its doors and hosted fellowships; we devoted space to ESL and other citizenship classes. The makeshift mosque in our town may have been closed off to us Christians, but we made sure the doors of our church were open to the Muslim refugees. At their best, evangelicals are on the front lines of “welcoming the stranger.”

It’s no surprise then that evangelical leaders have been calling for Christians to receive and serve refugees. A Christianity Today editorial this fall called Christians to embrace the “unparalleled opportunity to love neighbors here and abroad, and to showcase the beauty of the gospel that proclaims good news to the poor, liberty for those stuck in refugee camps, and a new life for those fleeing from oppression.”

Evangelicals recognize that many of these men, women and children are “brothers and sisters in Christ” who are leaving behind the cradle of Christian civilization.

But since the terrorist attacks in Paris last week, the debate over whether and how to receive refugees has intensified.

READ: ISIS, ISIL, Daesh — explaining the many names for terrorists

On the one hand, there are evangelicals calling for “prudent compassion,” the idea that we need not choose between accepting all refugees or no refugees, but through rigorous screening (understandably heightened in a time of war against terror), we can and should receive refugees.

Similarly, Ed Stetzer, vice president of LifeWay Research, urged believers to distinguish between our response to “the immigrants streaming across Europe to escape the radical Islamists” and our response to potential terrorists.

Richard Stearns, president of World Vision, called the church to love and serve the refugees even if it “goes against our instincts.”

“We want to protect ourselves from those who might hurt us,” he wrote. But he added: “Jesus asks us to love our neighbors — regardless if there may be enemies among them.”

Matthew Soerens, director of mobilization for World Relief, explained the rigorous process for receiving refugees and why the potential for admitting a terrorist is minimal.

“I think it’s a tragic decision for states to attempt to thwart efforts to resettle a small number of carefully vetted refugees from Syria,” he said. 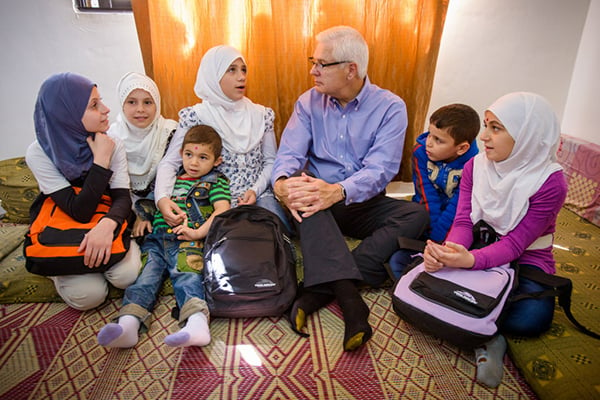 READ: Americans fret about Islam, immigrants, the future — and each other

But there are concerns that this process is not rigorous enough. And there are doubts about the ability of our government to properly screen out potential terrorists.

“Ineptitude” is a word I’ve heard a lot lately, applied to our government’s ability to ensure our safety.

Commentator Cal Thomas, in a column for the evangelical publication World Magazine, argues for closing the borders, because “there is no way to be certain who is a jihadist and who isn’t. What we do know for certain is that ISIS has bragged openly about including jihadists among those who have fled to Europe, and only a fool would believe that same strategy is not being applied to America.”

In the same vein, Franklin Graham in a Facebook post said “we must reform our immigration policies” to ensure that Muslim immigrants do not “come across our borders unchecked while we are fighting this war on terror.”

Many evangelicals agree with those sentiments and support the efforts of several Republican presidential candidates and two dozen governors to place a moratorium on any new refugees. These calls for closing the border represent the only way to ensure that we do not inadvertently let in terrorists who are posing as refugees. 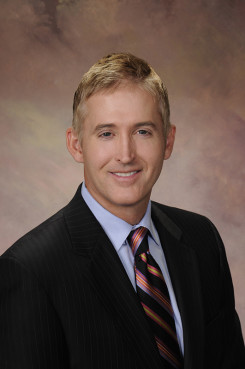 Congregations are divided. World reported that U.S. Rep. Trey Gowdy of South Carolina asked Secretary of State John Kerry to halt plans to settle refugees in his district. Meanwhile, the evangelical church Gowdy attends was one of several that expressed interest in helping with the refugee program.

Some evangelicals are opposed to all refugees; others say they do not know the best way forward. In a widely shared blog post, Kevin DeYoung, pastor of University Reformed Church in Lansing, Mich., a church with an international ministry to immigrants, decried both the “harsh anti-immigrant rhetoric” and “broad appeals to compassion” that fail to take into consideration the complexities of our situation.

At BreakPoint, a site begun by the late Chuck Colson to provide a Christian perspective on news, Gina Dalfonzo writes: “I don’t know what the answer is. I honestly don’t.”

I asked Russell Moore, president of the Ethics and Religious Liberty Commission of the Southern Baptist Convention, whether he believes Christians should support or resist efforts to bring Syrian refugees to American soil.

“The screening of refugees is a crucial aspect of national security, and we should insist on it,” he said. “At the same time, evangelicals should be the ones calling the rest of the world to remember human dignity and the image of God, especially for those fleeing murderous Islamic radical jihadis.

“We should remember the history of the 20th century, of Jewish refugees from the Holocaust and refuseniks from the Soviet Union who were largely ignored by the world community. We can have prudential discussions and disagreements about how to maintain security. What we cannot do is to demagogue the issue, as many politicians are doing right now. An entire generation of those fleeing genocide will be asking, is there is an alternative to the toxic religion they’ve seen. Will they hear evangelicals saying ‘Jesus loves you’ or ‘Who then is my neighbor?’ There are massive implications for both answers.”

My pastor friend was right. Evangelicals are “all over the place” on the issue. That’s why, for the foreseeable future, they will continue to debate the best way forward while showing both prudence and compassion. 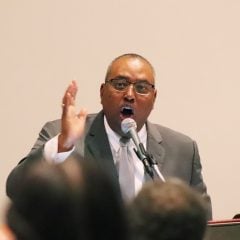