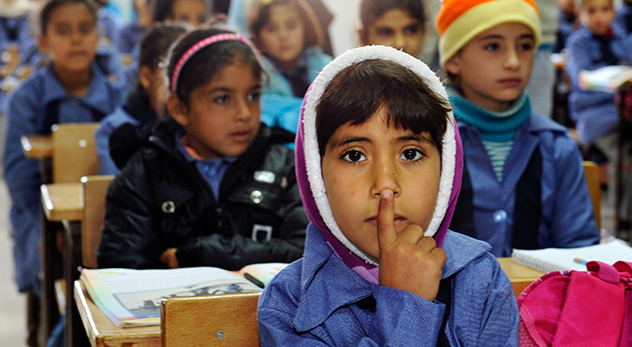 Of the Syrian refugees being referred by the U.N. for settlement, more than half are children under the age of 18. (Photo: Children inside a classroom at Za’atri refugee camp, host to tens of thousands of Syrians displaced by conflict. – Courtesy of United Nations Photo – http://bit.ly/1SAm79K)

When I talk to conservative Christians about their stance on a hot button issue like abortion or gay marriage, they usually quote the Bible. But when I’ve spoken to them about admitting Syrian refugees, almost none of them do.

These Christians–many who oppose allowing refugees into the United States–do not cite the Bible’s  commands to practice hospitality. They do not wrestle with God’s instructions for how the Israelites should treat refugees and immigrants. They do not invoke Jesus’ comments on loving one’s neighbor or Paul’s reminder that God does not give his children “a spirit of fear.” Instead, most of my conservative Christian friends talk a lot about what is “practical” and “logical” and “safe,” which seems to depend on how one defines those terms and which facts one is considering. [tweetable]Many “Bible-believing” Christians who oppose admitting refugees do not speak about the Bible at all.[/tweetable]

Jonthan’s 2012 book “A Faith Of Our Own: Following Jesus Beyond the Culture Wars” argued that many American Christians lead with their politics rather than their theology.

Even though these believers have bypassed what should be a critical component of any Christian ethic, they are onto something: conversations about important issues should consider all the facts. So here are a few facts about the Syrian refugee crisis that many Christians seem to be overlooking:

1. Many Christians oppose admitting Syrian refugees to the United States because they fear it may lead to a terrorist attack similar to Paris’. But so far, all Paris attackers who have been identified and confirmed are European nationals according to Federica Mogherini, the High Representative for Foreign Affairs and Security Policy/Vice-President of the European Commission. Foreign passports have been found at crime scenes. (One reportedly was a Syrian refugee passport, which some say might be fake and others claim may have been used by a terrorist to cross into Greece.) The available information is still developing, it seems likely that the majority, if not all, of the perpetrators in Paris were not refugees or immigrants from Muslim countries.

2. Many Christians oppose accepting Syrian refugees because they fear many will be terrorists. The State Department, however, reports that only 2 percent of Syrian refugees who’ve been admitted to the United States are “military-aged men with no families.” Of the Syrian refugees being referred by the U.N. for settlement, more than half are children under the age of 18. A large proportion are women or elderly men. What this means is that the vast majority of refugees who have been and are being considered by the United States do not fit what someone might consider a suspicious demographic profile.

READ: “Americans fret about Islam, immigrants, the future – and each other”

3. More than half of America’s governors (all except one are Republican) say they will not allow Syrian refugees into their states. Many claim that refugees are not properly screened before they are admitted. But the U.S. has one of the most rigorous vetting processes of any country in the world, and refugees are screened more heavily than any other type of immigrants seeking admittance.

The refugees in question are first pre-screened by the United Nations before ever being referred to the U.S. in order to insure they pose little threat.Then the U.S. takes over and begins reviewing biometric and biological data to confirm the applicant is who they claim. After this initial screening, the process takes an average of 18 to 24 months during which the candidate is examined and interviewed by the FBI, CIA, State Department, Defense Department, Department of Homeland Security, and other intelligence officials.

So what does all this mean? As Kathleen Newland, a senior fellow at the Migration Policy Institute in Washington, says, “The refugee resettlement program is the least likely way for a terrorist to infiltrate the US.”