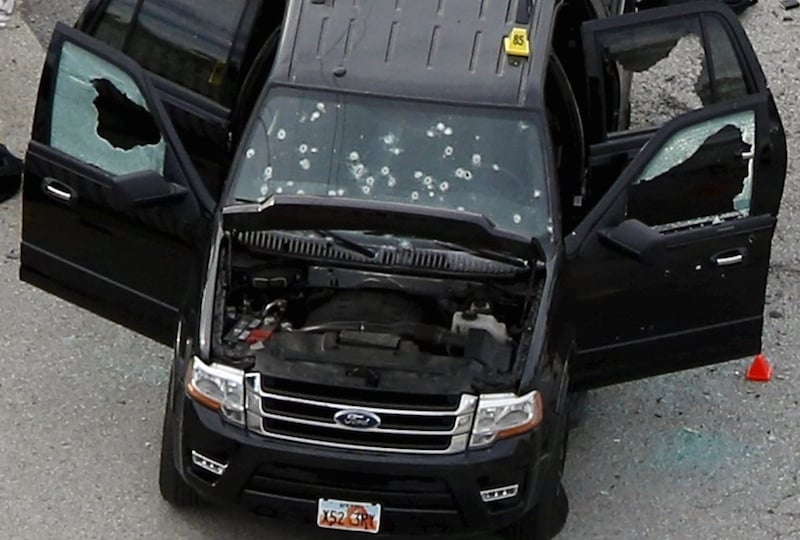 California officials says Tashfeen Malik and her husband, Syed Rizwan Farook, killed 14 people in San Bernardino then died in this rented SUV when they attempted to flee police. Photo by Mario Anzuoni courtesy of Reuters

Tashfeen Malik, the female suspect in the San Bernardino shooting spree, had expressed support for the Islamic State terrorist group and its leader, Abu Bakr al-Baghdadi, in a social media post, according to two U.S. officials. 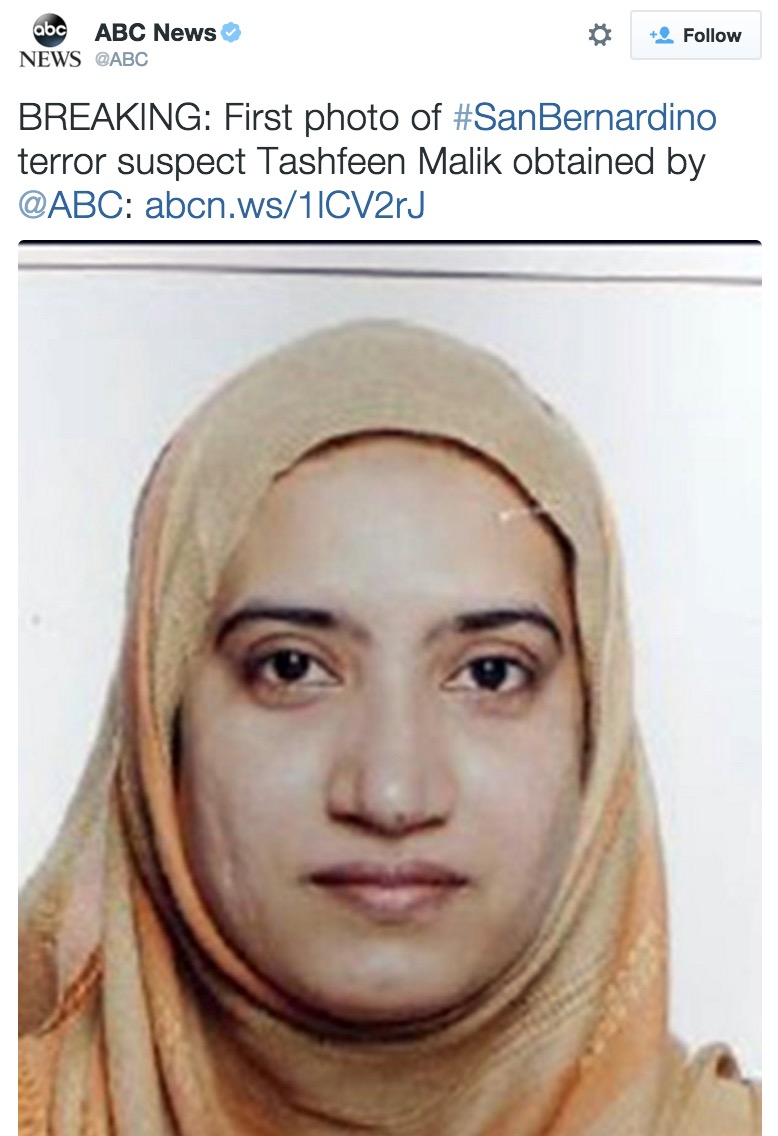 The FBI is investigating this week’s massacre in which a married couple killed 14 people in California as an “act of terrorism,” an official said on Friday. Malik, 27, a native of Pakistan, and her U.S.-born husband, Syed Rizwan Farook, 28, were killed in a shootout with police hours after the Wednesday massacre during a holiday party at the Inland Regional Center social services agency in San Bernardino, about 60 miles (100 km) east of Los Angeles.

U.S. investigators are evaluating evidence that Malik, a Pakistani native who had been living in Saudi Arabia when she married Farook, had pledged allegiance to Islamic State leader Abu Bakr al-Baghdadi, two U.S. officials told Reuters. They said the finding, if confirmed, could be a “game changer” in the investigation, though another source cautioned there was no indication that there was no evidence Islamic State “even knew” who the shooters were.

“Based on the information and the facts as we know them, we are now investigating these horrific acts as an act of terrorism,” David Bowdich, assistant director of the Federal Bureau of Investigation’s Los Angeles office, told reporters.

Bowdich also said the FBI also was examining crushed cellphones found near the shooting scene and had established that there were “telephonic connections” between the couple and other people of interest in FBI probes. 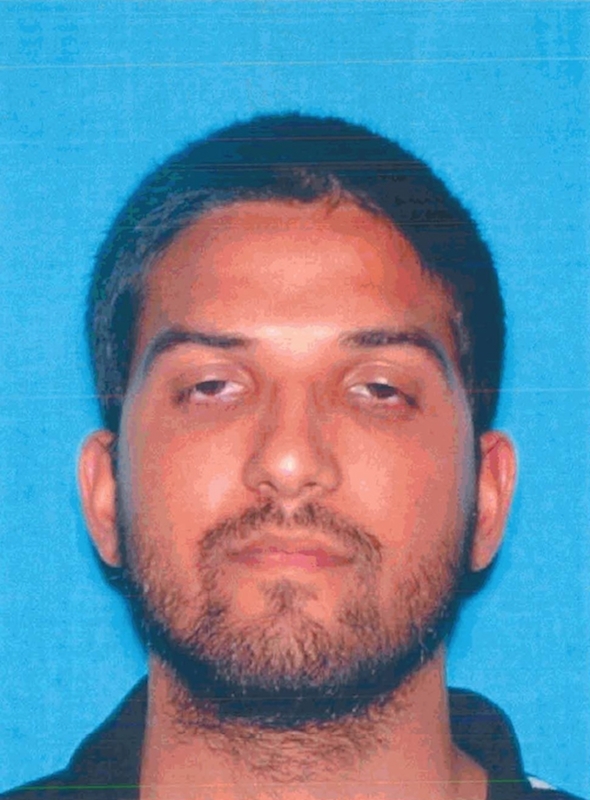 Syed Rizwan Farook is pictured in his California driver’s license. Farook, one of the alleged shooters in the California rampage that left 14 dead, Photo by California Department of Motor Vehicles via Reuters

The post pledging support to al-Baghdadi, was made under another name than Malik, but they declined to comment on when the message was posted — before or after the shooting at the Inland Regional Center. The Associated Press reports that Malik made the posting on Facebook using an alias, then deleted the postings.

Al-Baghdadi, 44, became leader of the Al-Qaeda-affiliated group, Al-Qaeda in Iraq, in 2010. The group later spread into parts of Syria and in 2014 declared itself a caliphate, under the name Islamic State, with al-Baghdadi as the leader, or caliph.

The latest developments come investigators delve into past travel, contacts and communications by Malik and her husband, Syed Rizwan Farook, for clues to the murder spree that left 14 people dead, family members say they are shocked and saw no sign that the American-born county health worker had been radicalized.

A search of a residential townhouse rented by the suspects turned up a staggering arsenal of firearms, thousands of rounds of ammunition, a dozen pipe bombs and a virtual bomb-making factory, police say.

A number of electronic devices, including cell phones and a hard-drive, linked to the suspects were believed to have been intentionally damaged in an attempt to thwart investigators from tracking their communications, a law enforcement official said. The official said an undisclosed number of devices were transported to the FBI laboratory in Virginia where analysts were attempting to salvage the information histories on the devices.

Farook had attended a holiday party Wednesday at the Inland Regional Center then left briefly, returning with his wife to open fire on the group of friends and co-workers. They wore masks and tactical clothing and carried hundreds of rounds of ammunition. The pair also left a primitive pipe bomb,which did not detonate, before returning to their rental house and its stockpile of weapons. 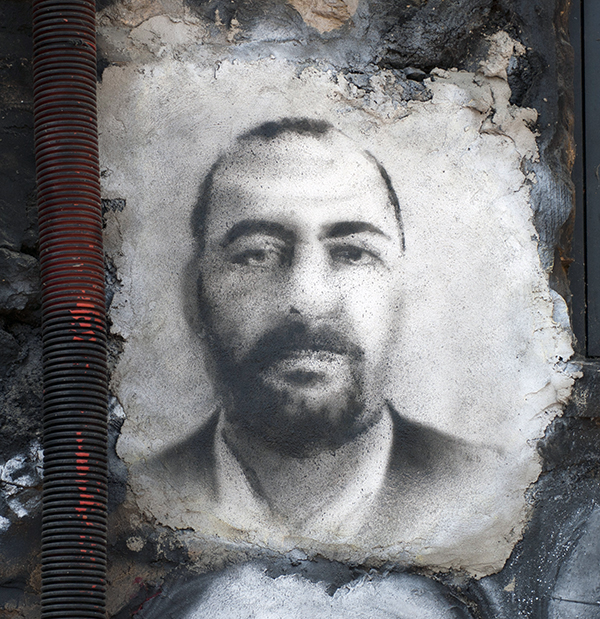 A portrait of Abu Bakr al-Baghdadi, leader of The Islamic State, is rendered on the wall of a building in St. Romain, France.

“Clearly they were equipped and they could have done another attack,” San Bernardino Police Chief Jarrod Burguan said Thursday. “We intercepted them before that happened, obviously.”

Investigators are examining evidence from three locations: the Inland Regional Center, where the killings occurred, the rented townhouse in nearby Redlands, and the rented black SUV in which the couple was fleeing when they were intercepted and killed in a gunbattle with police.

Federal, state and local investigators are particularly focused on the confiscated electronic devices to find on with whom the couple may have been in contact. The New York Times reports that Farook was deleting information from electronic devices at least one day before the attack, indicating it was planned in advance and may not have come in response to any argument or slight during the holiday party.

The U.S.-born Farook worked as an environmental health specialist for San Bernardino County for five years, conducting health inspections. Farook’s coworkers describe him as pleasant, but none of the colleagues contacted remember a lot about him.

Malik, 27, was born in Pakistan, entering the U.S. on a fiancée visa in 2014, the FBI says. The pair apparently met online, while she was living abroad.

Federal officials note that Farook had visited Saudi Arabia several times, including a trip in 2013 for the annual hajj, or pilgrimage, to Mecca that all Muslims are expected to complete at least once.

If he had become radicalized, his own family didn’t appear to detect it.

Farook’s brother in law, Farhan Kahn, expresses shock at the killings, calling the Farook he knew a “good religious person, just like a normal, anybody would be.”

Asked by NBC News if Farook was someone who had been radicalized, he says, “Not the person I know. He was not radical.”

He calls Farook simply a “bad person” for the attack, but says he has “no idea” what prompted it. Nor does Farook’s sister Saira Khan. “I can never imagine my brother or my sister-in-law doing something like this. Especially because they were happily married, they had a beautiful 6-month-old daughter,” Khan, who is married to Farhan Khan, tells CBS News.

“It’s just mind boggling why they would do something like this.” When CBS reporter David Begnaud notes that people can’t fathom how a couple could drop off their infant in the morning then go out and commit murder, Saira responds, “Yeah, we can’t either.”

“It makes us very upset and angry that how could you leave a 6-month-old daughter,” Farhan adds. “And he put us in this predicament,” Saira says.
Authorities have been careful not to speculate as to whether the attack, which also left 21 people injured, was a terrorist act until the investigation is complete.

“We do not yet know the motive; we cannot rule anything out at this point,” said David Bowdich, the assistant F.B.I. director in charge of the Los Angeles office.

“We don’t know if this was the intended target or there was something that triggered him to do this immediately.” Farook and his wife lived with Farook’s mother at a different location and lawyers for the family tell CNN that the family didn’t know anything about Farook’s deadly stockpile of ammunition.

The family was “completely shocked” to find out about Farook’s involvement in the massacre, David S. Chesley, an attorney for Farook’s family, told CNN.

He says family member had ever seen Farook with any of the weapons found at the townhouse. “They haven’t seen him with them, the pipe bomb, no one had ever seen him use or have anything like that.”

Nor did anyone in the family think that Farook had had any kind of training for such an assault. “This person was not aggressive,” Chesley says. Christian Nwadike, a colleague who worked beside Farook for almost four year, tells CBS News that Farook was different after he returned from Saudi Arabia, where he went on a pilgrimage.

“Do you believe that he was radicalized?” Begnaud asks him.

“Yes, by the wife, I think he married a terrorist,” Nwadike says.

“He married a terrorist?” “Yes, he was set up through that marriage,” Nwadike tells CBS News.