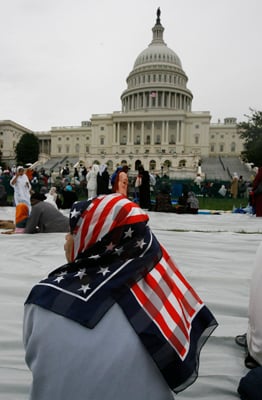 (RNS) A woman with a patriotic head scarf sits in front of the US Capitol during a 2009 “Islam on Capitol Hill’ event. Muslim leaders are now concerned about planned House hearings on the “radicalization of American Muslims.” RNS file photo by Tim Farrell/The Star-Ledger.

WASHINGTON (Reuters) – Just days after two Muslims were accused of gunning down 14 people in California, a Reuters/Ipsos poll shows 51 percent of Americans view Muslims living in the United States the same as any other community, while 14.6 percent are generally fearful.

In the first poll on views of Muslim Americans taken in the aftermath of the Paris and San Bernardino attacks, much of the division is partisan. Among Democrats, 60 percent said they view Muslims like any other community, compared with 30 percent of Republicans.

How Americans should treat Muslims, both those already living in the United States and those seeking to come to the country as refugees, became a divisive topic after Islamic State claimed credit for killing 130 people in Paris and a Muslim couple is believed to have slaughtered 14 people and wounded 21 others in California.

“If terrorism is designed to create a larger gap between Muslims and Westerners, unfortunately they’re succeeding,” Jamal said. “The threat of terror is going to be fought by Muslims and non-Muslims together. You would like to see those gaps close so people are working together and not being fearful.”

Of the 1,056 likely voters across the nation polled online on Thursday and Friday, 34.7 percent said they are fearful of “a few groups and individuals” in the Muslim community.

Republicans were more likely than Democrats to support closely monitoring mosques (64 percent compared with 43 percent) or closing ones with suspected extremist ties (69 percent to 48 percent).

Republican presidential candidate Donald Trump drew criticism when he said he would be willing to close mosques where extremists practiced and that a database of all Muslims should be created.

“There still is very much a political divide in each of these responses,” said Lori Peek, a sociology professor at Colorado State and author of the 2011 book “Behind the Backlash: Muslim Americans After 9/11.” “Democrats and the independents are looking more similar, and they generally are more tolerant.”

Many voters said they agree that Muslims are less willing to assimilate than other immigrant groups.

Peek said numerous studies have found that Muslims are more successful at integrating into American society — obtaining education, voting regularly and living in diverse neighbors — than any other immigrant group.

Many Americans said they believe Muslims are more likely to put their own religion above the law — a point that echoes critics’ insistence that Islamic sharia law is being forced upon non-believers. Forty-nine percent said Muslims put religion above the law, compared with 33 percent who thought the same of Christians and 23 percents of Jews.

Those polled also expressed disagreement that American Muslims are doing enough to report possible extremists, with 23 percent saying they believe that potential risks are being reported.

Ibrahim Hooper, spokesman for the Center for Islamic-American Relations, said while he is pleased that the majority of Americans view his religion positively, he is concerned by the continued minority that holds anti-Islamic views.

“We are seeing I think a more toxic anti-Muslim environment or atmosphere than we have seen since 9/11,” Hooper said. “In some ways it’s worse because it’s been mainstreamed by public figures like Donald Trump or Ben Carson so it’s seen as a natural, normal kind of thing.”