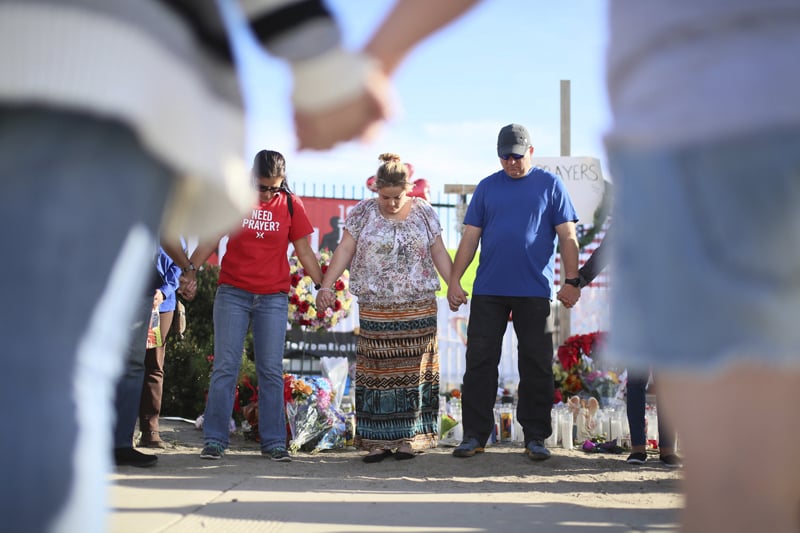 Mourners engage in a group prayer on Dec. 5, 2015 at a makeshift memorial for victims following the shooting attack in San Bernardino, Calif. Photo courtesy of REUTERS/Sandy Huffaker
*Editors: This photo may only be republished with RNS-CHRISTIAN-SHOOTING, originally transmitted on Dec. 7, 2015.

(RNS) The murderous attacks in San Bernardino, Calif., are too fresh to address at any length.

The brutality and horror of the killings of the innocent and the bloody shootout, the indescribable grief of the families, and the sheer shock of such an incident occurring in an otherwise quiet community demand prayer, reflection, and comfort more than quick and inevitably inadequate pontification.

Sadly, these shootings are not unique. Too often, we have experienced the agony of slaughter in churches, homes, theaters, schools, and other venues of what has been the quiet commonplace.

Yet there is a striking facet of these tragedies that shines brightly amid their grim darkness: The witness of Christians who, in the face of evil, have displayed the love of their savior and the forgiveness he alone can bring.

This past June in Charleston, S.C., when nine people were gunned down at a church Bible study, the nation was moved, and many skeptics sobered, by the forgiveness shown by the families of the victims. 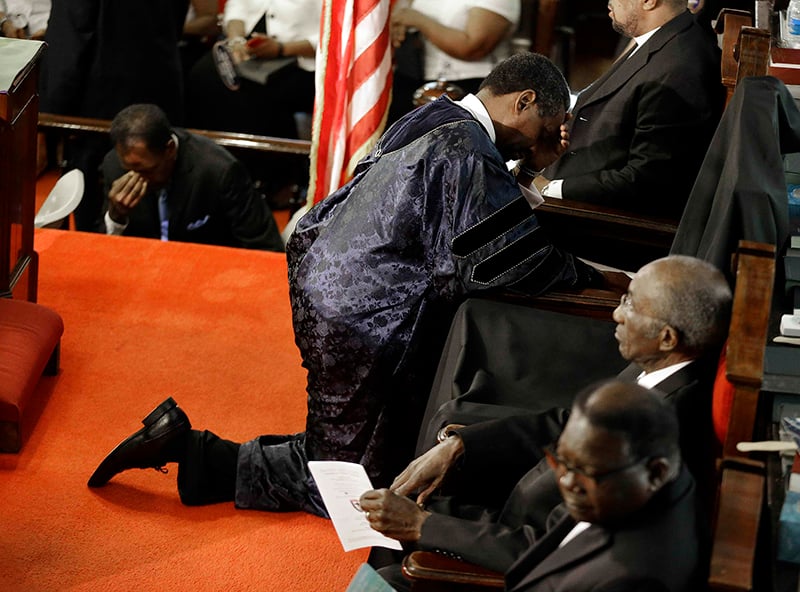 The Rev. Norvel Goff prays at the empty seat of the Rev. Clementa Pinckney at Emanuel African Methodist Episcopal Church in Charleston, S.C., on June 21, 2015. The church held its first service since a mass shooting left nine people dead during a Bible study. Photo courtesy of REUTERS/David Goldman/Pool
*Editors: This photo may only be republished with RNS-CHARLESTON-AME, originally transmitted on June 22, 2015.

“I forgive you and my family forgives you,” said Anthony Thompson to alleged shooter Dylann Roof. Thompson’s wife, Myra, was one of those slain. “But we would like for you to take this opportunity to repent, confess. Give your life to the one who matters the most, Christ.”

Speaking of her fallen mother, Ethel Lance, Nadine Collier said to Roof, “I will never be able to hold her again, but I forgive you. And have mercy on your soul. You hurt me. You hurt a lot of people but God forgives you, and I forgive you.”

Less than a month ago, a pregnant Amanda Blackburn was murdered in her home while her baby slept in another room.  This was not a mass killing, but any murder slices into the conscience. And in this case, Blackburn’s life and witness made her tragic death especially gripping.

The wife of a young pastor named Davey Blackburn, she had written, only that morning, an entry in her journal that read: “Turn your eyes upon Jesus. Look full in his wonderful face and the things of earth will grow strangely dim. In the light of his glory and grace. What an amazing Sunday yesterday that filled my heart to see so many people in your church. Learning, growing, meeting you and taking next steps. Thank you for letting me get to see all of this (with) my own eyes. I love you Lord. Glory and praise to you.”

Responding to his wife’s horrific killing, Davey Blackburn told Fox News, “I don’t want to live my life going down the path of bitterness because it will destroy my soul and it will destroy everybody around me if I choose that (unforgiveness).” He continued:

So today, I choose forgiveness. And tomorrow, I pray that I can wake up and choose forgiveness by the power of Jesus Christ. One of the things about Jesus when they were inflicting way more pain than any of us can imagine on Him, on the cross, He looked out and he said, “Father, forgive them, for they don’t know what they’re doing.” And so that Spirit lives in us and we’re just praying His Spirit would help us in that.

Then there was police officer and part-time pastor Garrett Swasey, who less than two weeks ago gave his life attempting to defend people in a Planned Parenthood facility in Colorado. At the close of his final sermon, given on Sunday, Nov. 15, Swasey said, “Lord, let us view grace as what it truly is: a costly tremendous gift that cost You everything, that we might be in relationship with You. And because of the high price of that gift, that we might make You and the Gospel the forefront of our minds as the most valuable thing we possess, as we sang this morning, ‘You can have all this world but give me Jesus!’ Give us You!”

Officer Swasey could not forgive his killer because, of course, the killer murdered him. But had he somehow survived, no one should doubt Swasey would have sought out the deluded soul who shot him and shared the love of Jesus with him. Swasey was a Christ-follower in word and deed, heart and soul.

No one disputes that murderers should be brought to justice and prosecuted for their wicked actions. To murder is to blaspheme against God: Only he is the author of life, and only he has authority to decide when it should end. Murderers usurp his role, defiling those who bear the image of the Eternal Lord of all. This merits severe punishment as a matter not of revenge or even deterrence, but justice. 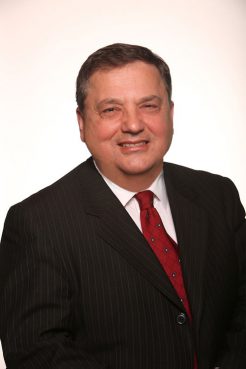 But criminal accountability is a matter of governmental obligation and true social justice. Christians forgiving those who commit evil acts against them is a matter of mirroring Jesus Christ in their own lives.

“Bless those who persecute you; bless and do not curse,” wrote Paul to the church in Rome (Romans12:14). In blessing those who have persecuted — who have killed — those they loved so dearly, these men and women have shocked and even silenced many in our post-Christian America. That’s sometimes how transformation starts.