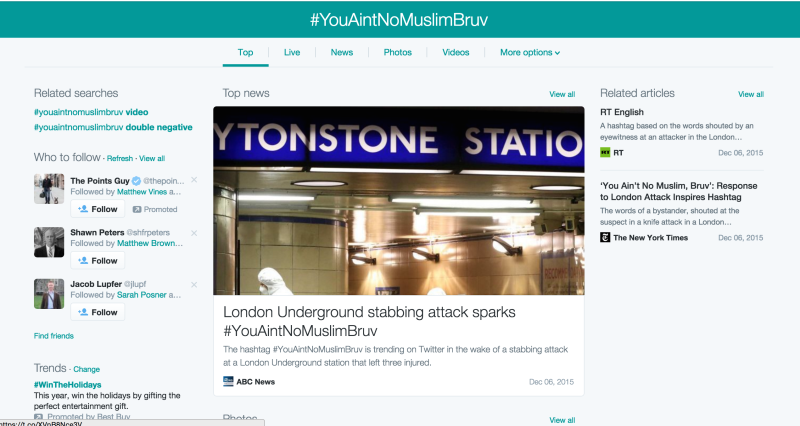 An alleged terrorist stabbing in the London Metro provoked a defiant riposte from a bystander that has become a social media trend: #YouAintNoMuslimBruv. Screenshot courtesy of #YouAintMoMuslimBruv
December 7, 2015
Reuters

An alleged terrorist stabbing in the London Metro provoked a defiant riposte from a bystander that has become a social media trend: #YouAintNoMuslimBruv. Screenshot via Twitter

LONDON (Reuters) The stabbing of a man in the London metro in what police described as a terrorist attack provoked a defiant riposte from a bystander that has struck a chord in Britain: "You ain't no Muslim, bruv."

The 29-year-old assailant shouted "This is for Syria" as he attacked a 56-year-old man and threatened others before being detained by police who used a stun gun, witnesses said.

Video footage posted on Twitter showed police officers closing in on the knife-wielding man and eventually pinning him down after the attack, in which two people were wounded at the Leytonstone underground station.

An onlooker standing near a pool of blood shouted the colloquial phrase that has swiftly become a popular Twitter hashtag #YouAintNoMuslimBruv and is intended to deny that such an attack could have anything to do with Islam.

Some Twitter users quoted Islamic scripture to contradict militant Islamists who try to use Islam to justify attacks on unarmed civilians and to recruit followers in the West and Middle East.

"#YouAintNoMuslimBruv, just another psychopath attempting to use religion as an excuse to justify your barbaric actions!!" said one Twitter user, Natasha.

British warplanes joined air strikes against Islamic State in Syria for the first time on Thursday, a few hours after parliament gave its approval.

Prime Minister David Cameron has said the air strikes will not increase the likelihood of an attack on Britain, which he says militants already view as a top target, with seven plots foiled over the past year.

Britain is on its second-highest security alert level of "severe," meaning a militant attack is considered highly likely, though not imminent. This is mainly because of the threat posed by Islamic State.

Related Posts
By Caitlin Yoshiko Kandil
'I have to find the Mecca of my heart': Muslims grieve as hajj is drastically limited
By Kathryn Post
Protester, Oluwatoyin Salau, found dead after tweeting assaulter was 'disguised as a man of God'
By Associated Press, Kathryn Post
Falwell apologizes for tweet that included racist photo
By Aysha Khan
Facebook, Instagram unblock #Sikh hashtag amid 1984 massacre remembrance
By Hind Makki
Coronavirus restrictions on mosques bring women to the fore