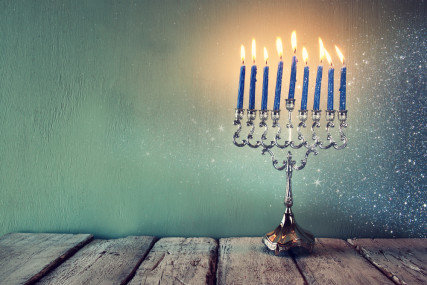 That's an iconic line from the thriller, Marathon Man.

Except this time, it was the mother of a child in our synagogue religious school.

"Given the world situation, is it safe for us to display the family menorah during Hanukkah?"

Her question reminded me of the Talmudic passage (Shabbat 21b) about Hanukkah:

It is incumbent to place the menorah by the door of one's house on the outside, in order to advertise the miracle of Hanukkah. If one dwells in an upper chamber, he places it at the window nearest the street. But in times of danger of persecution, it is sufficient to place it on the table.

So, are today's Jews living during a time of persecution?

If any Jewish community has a reason to hide the Hanukkah lights, it would be the Jews of France. Consider the wave of anti-semitic attacks against French Jews, and the recent ISIS attack.

And yet, the Jews of France are lighting their menorahs -- very publicly. There was a huge public menorah lighting in Paris. More than that: Hanukkah menorahs are adorning the windows of Jewish stores and homes.

And that's in Paris.

Hanukkah neatly conforms to the basic model of many Jewish holidays: "they hated us; they tried to kill us; we won; let's eat". Except with Hanukkah, it is a little bit more subtle than that. Yes, the Maccabees fought the Greek armies, who were superior in strength, and won.

But the other miracle (and the "cruse of oil that was enough for one day but lasted for eight nights" story is a nice story, but it is a later legend) was that Judaism survived -- even and especially in the face of a majority culture that was pervasive and attractive.

The most dominant emotion that I am encountering among American Jews is fear.

We look around, we see the world, we see what happened in San Bernardino. At least five friends of mine have been urging me to buy a gun. Because all Jews should be armed, some say. "Unarmed Jews are unsafe Jews. Like the Jews of Europe. They had no guns, and look what happened to them..."

There are a lot of Jews who are loving their fear.

More than thirty years ago, my late teacher, Rabbi David Hartman, penned these words in his essay, "Auschwitz or Sinai?" He was asking the question: what will be the basis for a revitalized Jewish life in our time?

In the twentieth century we have again become a traumatized nation. The ugly demonic forces of anti-Semitism have horrified our sensibilities. We can never forget the destruction of millions of Jews in World War II. Many, therefore, justify and interpret the significance of our rebirth in terms of Jewish suffering and persecution.  “Never again will we be vulnerable. Never again will we expose our lives to the ugly political forces in the world.”

But, as tempting as it has been for two generations of Jews, the memory of the Holocaust, however holy, and of Jewish victimization and vulnerability, however relevant, cannot be the fulcrum of Jewish identity.

It is destructive to make the Holocaust the dominant organizing category of modern Jewish history and of our national renewal and rebirth. It is both politically and morally dangerous for our nation to perceive itself essentially as the suffering remnant of the Holocaust...

Jewish suffering did not create self-pity but moral sensitivity: “And you shall love the stranger because you were strangers in the land of Egypt”.

Back to the woman who asked me whether it was safe to display the menorah.

I tell her: Light your menorah, and display it as publicly as you can.

But, is it safe? Aren't there bad, dangerous, Jew-hating people out there?

Sure. Even in recent days, in heavily Jewish areas: a man, yelling ant-Semitic epithets, attacked the owner of a Jewish book store on the Upper West Side on the street; Bukharian Jewish homes in Forest Hills, Queens, are being burned, most likely by a serial arsonist. Why deny reality?

A sobered realization that the world is a dangerous place, especially for Jews? Absolutely.

But, let's not let our fear crowd out our other Jewish emotions.

Look at the Jews of France. If they are celebrating openly, how can we not do the same?

Right. It's called celebration. As in, joy.

If there is a battle for emotions within the Jewish soul (think: Inside Out) let's let joy win.

One of the names for God in the book of Genesis is Pachad Yitzchak, which is usually translated as "the fear of Isaac." Recall that Isaac's father, Abraham, bound him on the altar and almost sacrificed him.

So, Isaac's experience of God was of the terror that he felt, bound on the altar, practically feeling the blade of his father's knife.

Let's find another god to worship -- and let's do it with joy.

Let the light come through the darkness. Happy Hanukkah.