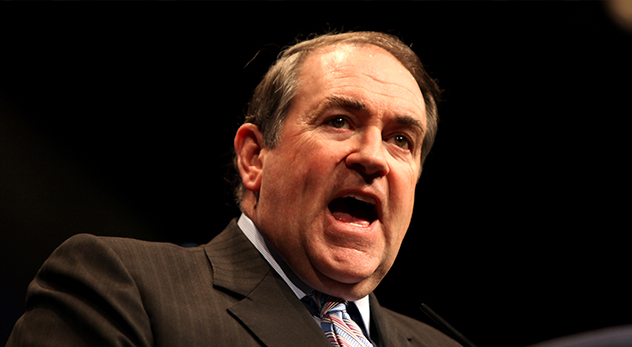 When it comes to Israel, Mike Huckabee should abandon simple narratives that recognize only one side of the story. - Image courtesy of Gage Skidmore (http://bit.ly/1QtEoXc)
December 8, 2015
Jonathan Merritt

When it comes to Israel, Mike Huckabee should abandon simple narratives that recognize only one side of the story. - Image courtesy of Gage Skidmore (http://bit.ly/1QtEoXc)

Israeli citizens were evicted from their homes “at gunpoint” during Israel’s disengagement from the Gaza Strip in 2005, presidential Mike Huckabee said at Brooklyn, New York fundraiser on Sunday. “I’ve seen the film of Gush Katif. You see good Jewish families taken at gunpoint out of their own home and marched out,” he said, adding that the sight made him weep.

It was the Israeli government, not a Palestinian militia, that evicted these Gaza residents from their homes. But that fact is secondary to the point Huckabee is trying to make: The displacement of Israeli citizens proves yet again that they, rather than the Palestinian people, are the primary victims in this conflict.

The story Huckabee is telling is not flat out wrong, but it is incomplete. It’s a common tactic used by many on both sides of this debate—including more than a few conservative Christian leaders—to stack the deck in favor of their side by telling simplistic and partial narratives that mask a glaring double standard. The approach makes for great sound bytes, but it’s no way to have a conversation about an issue as complex as this one.

As a former Southern Baptist pastor, Huckabee believes that Christians have a moral responsibility to support the modern state of Israel because the Jews are “God’s chosen people” in the Bible. Recently, he said, “No American president should ever put the pressure on Israel to give up land that God gave them the title deed to.”

In this, Huckabee has much in common with many of his fellow believers. Seventy-two percent of White evangelical Protestants, for example, sympathize more with Israel than the Palestinians. And a new study from the Brookings Institute found that Israeli Prime Minister Benjamin Netanyahu is the most admired world leader among American evangelicals, followed by the late President Ronald Reagan. To maintain strong support for Israel, these leaders tap into a history that stretches over many millennia.

Modern Christians and Jews who know the Egyptian Exodus narrative are familiar with notion of Jewish displacement. This story recounts how the Hebrew people broke free from the bondage of Egyptian slavery and set out in search of a homeland. Settling in this “Promised Land” was not easy because it was already populated by pagan tribes who themselves were often themselves displaced so ancient Israel could be established. But the new home was not long-standing and the Babylonian Empire would eventually conquer Jerusalem and many Jews were exiled to Babylon.

By the time of Christ’s birth, the Jews had repopulated Israel, but their homeland had since been conquered by the Roman Empire. The Romans often restricted Jewish religious customs and squelched Jewish nationalism. While the Jewish people remained on their land, the Roman authorities often compromised their sense of “home” there. When the Jews revolted in 66 AD, the Roman military destroyed the temple and either killed or exiled many prominent Jewish leaders. 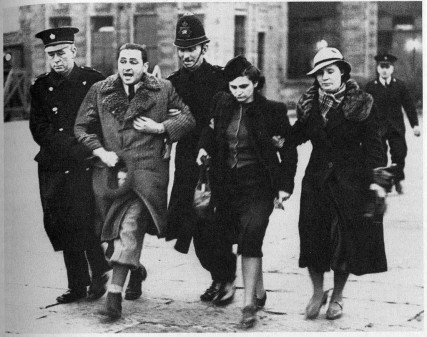 taken at Croydon Airport in late March or early April 1939. On Wednesday 29th March over 400 Jewish refugees arrived at the airport in a number of aircraft from all over Europe seeking political asylum, two weeks before Germany had occupied Czechoslovakia and a group of thirteen Czech Jews had flown to Cracow in Poland and then on to Copenhagen from where they chartered a tri-motor aircraft and flew to Croydon which at this time was London’s International Airport. The following day it was decided by the authorities that they should be returned to Copenhagen on the same aircraft, they were forcibly put onto the aircraft but created such a scene during which one of the aircraft’s windows was broken that the Danish pilots refused to take off. - Image courtesy of Leonard Bentley (http://bit.ly/1NEbFOD)

In modern times, the narrative of Jewish displacement draws from the terrible accounts of Nazi Germany and the Holocaust. Anne Frank is not the only Jewish person to recount stories of being chased from their home to hide in fear, flee to a foreign land, or face the Hitler’s brutal regime. Several waves of Jews emigrated from Austria and Germany between the rise of the Nazi government in 1933 and the wars conclusion—more than 340,000 according to some estimates. Post-war anti-Semitism led to a Jewish refugee crisis, but as with displaced Syrians now, many Americans believed “we should try to keep them out” of the U.S.

While conflating all these narratives fails to recognize the unique history of each event, a pattern of displacement throughout Jewish history is undeniable. Progressives who fail to reckon with it are being no more honest than the conservatives they oppose. This history has shaped the thinking of many modern Jews and Zionists. When Huckabee speaks of the displacement of modern Israelis from Palestinian-controlled Gaza Strip, he understands that it is being heard in the context of this history.

But when one speaks of the history of displacement, there are other relevant historical facts that Pro-Israel advocates often fail to mention.

The nation of Israel was not established out of thin air. It was built on the back of a violent war with surrounding Arab communities who did not believe the Jews had a legitimate right to establish a state in the historic land of Palestine. The war had devastating effects on many Arab Palestinians who had resided on the land since the days of the Ottoman Empire and before. When Israel was established in 1948, many Palestinians either fled their homes or were displaced by the new Israeli government. While estimates vary, as many as 700,000 Palestinians were expelled from their homes. This event is still known among the Palestinian people as “al-Nakba” or “the catastrophe.”

The Israeli government adopted a series of Ottoman ”absentee laws,” which prohibited Palestinian Arabs from returning home or claiming property. These were combined with “right of return” laws, which stated that if any Jew living anywhere in the world came to Israel, they would be given immediate citizenship. These twin laws created a paradox in which many Palestinians are banned from the homeland they once knew while many Jews are welcomed to a homeland they’ve never known. 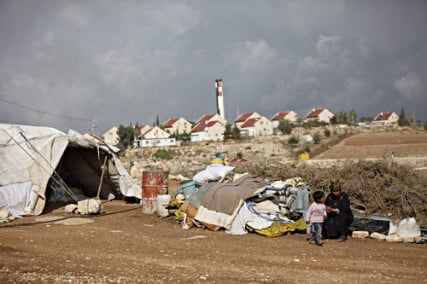 Hebron region. In the foreground, a tent where a Palestinian family lives, and in the background an illegal Israeli settlement. - Courtesy of the ICRC of the Red Cross (http://bit.ly/1jQzK9r)

The displacement and subsequent laws have created a massive crisis in which one in three Palestinians worldwide are refugees. Millions live in neighboring countries—often in refugee camps—where the law sometimes limits their ability to work and provide for their families. An estimated five million Palestinians are eligible for U.N. humanitarian assistance—the largest refugee crisis in the world other than the current Syrian crisis.

A presidential candidate failing to recognize or mention this history should alone disqualify him or her from serious consideration. But there’s more.

Following the initial waves of displacement, Israel has continued to expel Palestinians from their homes. The Israeli government has consistently applied a domestic policy that includes the forced seizure of land and the building of Israeli settlements in Palestinian territory. The Israeli military often evicts Palestinian families, bulldozes homes and harasses Palestinian communities. The United Nations Office for the Coordination of Human Affairs has kept detailed records of Israeli demolitions and evictions leading to the forced displacement of Palestinians. Many other organizations have documented these events thoroughly. The Israeli government routinely ignores calls from its allies, such as the United States, and humanitarian organizations, such as The Red Cross, to cease this inhumane and illegal behavior. At other times, Israeli authorities promise a change of course, but do not follow through.

Huckabee failed to speak of these travesties either. Or, the thousands of Palestinians who have been displaced within Gaza, the region he focused on in his fundraising talk. The violence perpetrated by Hamas in that region has not helped the cause of the Palestinian people and many innocent Palestinians have been harmed by the power struggle that has ensued.

Christians should be sympathetic to the plight of any oppressed person. Every person is created in God’s image and deserves a place to call “home.” No one should be forced to leave their home unjustly, regardless of his or her nationality. Christians have no choice but to recognize the many sides of this conflict and the ways in which members of both sides have perpetrated violence or prevented peace from taking root.

Mike Huckabee says he opposes a two-state solution to the Israeli-Palestinian conflict because “two governments … can’t govern the same piece of real estate.” Others believe such a path is possible. We should have that conversation. But such a discussion requires a more holistic understanding of this conflict—one that includes thousands of years of anti-Semitism, a litany of empires and nation states, the demagoguery of modern politicians, and the treacherous displacements of both Palestinians and Israelis that have resulted from unsustainable policies and the lack of true leadership.

[tweetable]The way you tell the story and how much of it you tell will often change where that story takes you.[/tweetable] If Mike Huckabee wants to be president, he should live by the title of his own book and "do the right thing," which means telling an honest and holistic narrative about the Israeli-Palestinian conflict. Stories that promote false binaries and only serve to further polarize the issue must be set aside. This should be the commitment of every Christian—especially one who wants to be president.