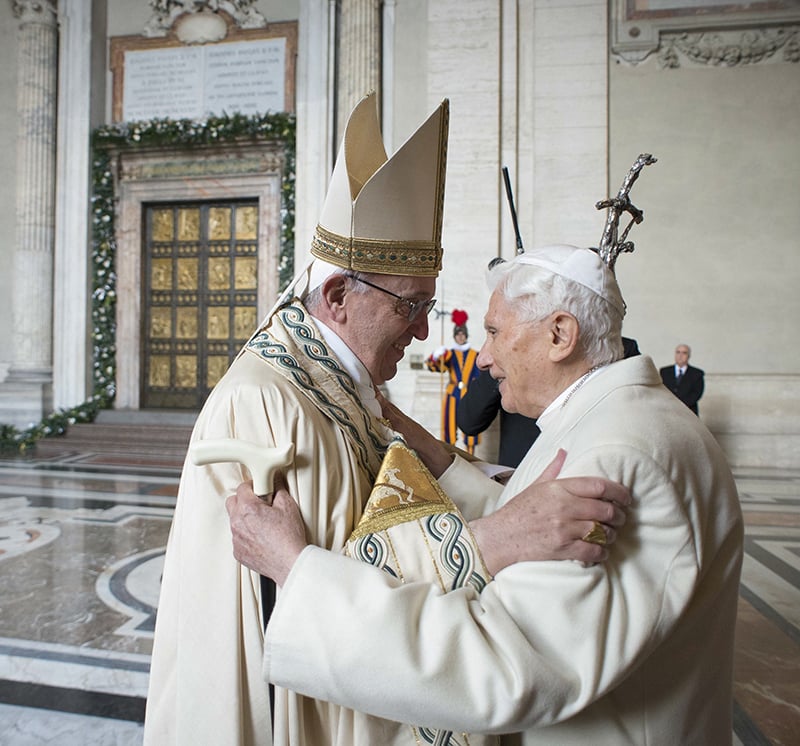 Pope Francis embraces Emeritus Pope Benedict XVI before opening the Holy Door to mark opening of the Catholic Holy Year, or Jubilee, in St. Peter’s Basilica, at the Vatican, on December 8, 2015. Photo courtesy of REUTERS/Osservatore Romano/Handout via Reuters
*Editors: This photo may only be republished with RNS-POPE-HOLYYEAR, originally transmitted on Dec. 8, 2015.

VATICAN CITY (RNS) Pope Francis launched the Jubilee Year of Mercy on Tuesday (Dec. 8) with the opening of the Vatican Holy Door near the end of a Mass in St. Peter’s Square where he was joined by his predecessor Pope Emeritus Benedict XVI and thousands of pilgrims, surrounded by heavy security.

“This extraordinary year is itself a gift of grace,” Francis told the faithful in his homily at Mass. “To pass through the holy door means to rediscover the infinite mercy of the Father who welcomes everyone and goes out personally to encounter each of them.”

“How much wrong we do to God and his grace when we speak of sins being punished by his judgment before we speak of their being forgiven by his mercy,” he said. “We have to put mercy before judgment.”

After addressing the crowds, Francis embraced a frail-looking Benedict, who resigned from the papacy in 2013 and was invited by his successor to attend the jubilee ceremony.

Francis had to push a couple of times to open the Holy Door into the grand basilica. He then walked slowly through St. Peter’s, followed by Benedict and a procession of cardinals, bishops, priests, men and women religious, and laity.

In doing so, they marked the start of a pilgrimage that is expected to see millions pass through the Holy Door, which is opened only during Jubilee Years. In addition, for the first time Catholics around the world will be able to walk through designated holy doors in cathedrals in other countries.

A holy year usually occurs every 25 years, although Francis chose to call an “extraordinary” jubilee just 15 years after the previous one. While the idea of a jubilee dates to the Bible, the Vatican tradition began in 1300 when Pope Boniface VIII announced the first Christian jubilee.

READ: The ‘Splainer: What’s that Jubilee Year of Mercy the pope keeps talking about?

Before opening the current Jubilee Year, Francis highlighted the 50th anniversary of the Second Vatican Council, a turning point that sought to engage the Catholic Church with the modern world.

“Before all else, the council was an encounter,” the pope said. “It was the resumption of a journey of encountering people where they live: in their cities and homes, in their workplace.” The pontiff then encouraged Catholics to adopt the same enthusiasm and openness during the Jubilee Year, which runs until Nov. 20, 2016.

After declaring the jubilee open, Francis appeared from his window overlooking St. Peter’s Square to deliver the Angelus prayer, during which he called on Catholics to celebrate the Dec. 8 Feast of the Immaculate Conception in two ways.

“First: Fully welcome God and his merciful grace into our lives. Second: Become in our time creators of mercy through an evangelical path,” he said, before asking the crowds to greet Benedict XVI.

Tens of thousands of pilgrims underwent tight security checks, including metal detectors, in order to attend the ceremony. There was a strong police presence around the Vatican and a no-fly zone, which also banned drones from the area.

The day’s events were to conclude on Tuesday evening with a projection of photographs onto the facade and cupola of St. Peter’s Basilica depicting the jubilee’s theme of mercy as well as making a statement about the beauty of the natural world and the need to combat climate change.

The latter reflects Francis’ concern for the environment, which he stressed in his June encyclical on the topic. Tuesday’s gesture also comes as world leaders gather in Paris to negotiate a deal to tackle global warming, a summit whose outcome the pope said is crucial to the future of humanity.