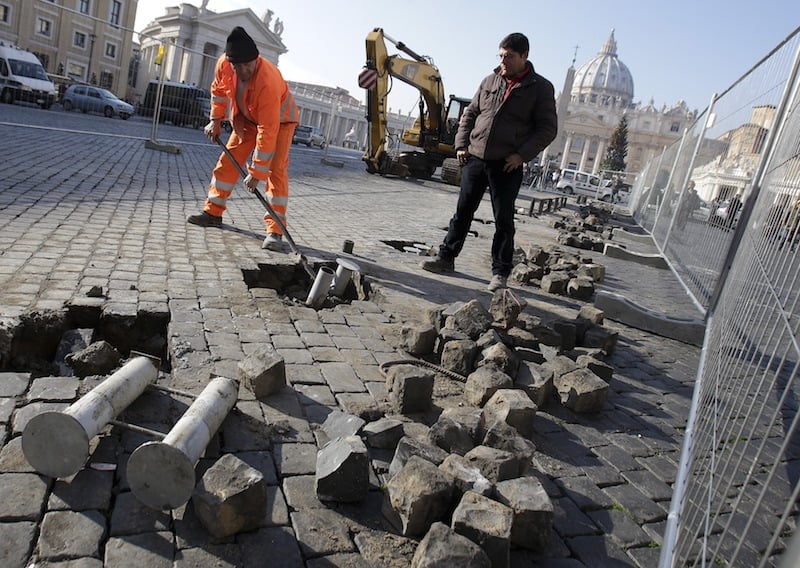 Laborers work in front of the Vatican in Rome on Dec. 4, 2015. Rome is bracing for the arrival of millions of pilgrims for the 12-month Jubilee Year of Mercy. Photo courtesy REUTERS/Max Rossi

The ‘Splainer (as in “You’ve got some ‘splaining to do”) is an occasional feature in which RNS staff give you everything you need to know about current events to hold your own at a cocktail party.

(RNS) For months now, Vatican watchers have been talking about the upcoming jubilee as one of the biggest events of Pope Francis’ pontificate. But what’s it all about? Why will millions of pilgrims be descending on Rome to walk through a door? With the jubilee set to begin Tuesday (Dec. 8), we take a look at why it’s so important and what Catholics can expect from the Holy Year.

Q: What is a jubilee?

A: In the Catholic Church, a jubilee — or a holy year — is a religious event that involves the forgiveness of sins, as well as reconciliation. But the idea of a jubilee dates back to the Bible: “And you shall sanctify the fiftieth year, and proclaim freedom throughout the land for all who live on it,” Leviticus 25:10. For the ancient Israelites, the jubilee was a time properties were returned to their original owners or legal heirs, slaves were set free and creditors were barred from collecting debts.

Pope Boniface VIII in 1300 declared the first Christian jubilee, beginning with the opening of the Holy Door, an entrance to St. Peter’s Basilica, usually blocked, through which pilgrims can enter. Other holy doors are also opened for this jubilee in Rome and around the world for the first time; the year ends when they are closed.

On Sunday (Nov. 29) Pope Francis opened a door at the cathedral in Bangui, the capital of the Central African Republic, as a symbolic start to the Holy Year.

Q: What is the Jubilee of Mercy all about?

A: Catholic practice has been to mark the jubilee every 25 years, and many expected the next jubilee to commence in 2025. But a pope can proclaim an “extraordinary” jubilee when he deems necessary. The Jubilee of Mercy will end on Nov. 20, 2016.

During a jubilee, Catholics can obtain special indulgences, or remission for their sins, if they fulfill certain conditions and do good works or make pilgrimages.

In outlining his views on the jubilee, Francis wrote: “The time has come for the church to take up the joyful call to mercy once more. It is time to return to the basics and to bear the weaknesses and struggles of our brothers and sisters.”

Q: What are the main events?

A: The Holy Door at St. Peter’s Basilica will be opened by Francis on Tuesday, with a series of events including some dedicated to young people, the sick and disabled, prisoners and those involved in works of charity.

Other smaller events are planned before the Holy Door is shut on Nov. 20, 2016.

The jubilee is expected to draw millions of pilgrims from around the world.

Q: What will the Holy Year achieve?

A: It will call on Catholics to reflect on the theme of mercy and serve as a unifying moment for the church globally. The Vatican has been rocked by scandal since the last jubilee, including revelations of widespread clerical sexual abuse, while it has also struggled to stay relevant to modern-day life.

Q: How does this fit into Pope Francis’ papacy?

A: Francis has long called for the church to take a more pastoral approach.

Recently, he added: “I continue to say that today the revolution is that of tenderness, because from here derives justice and everything else.”