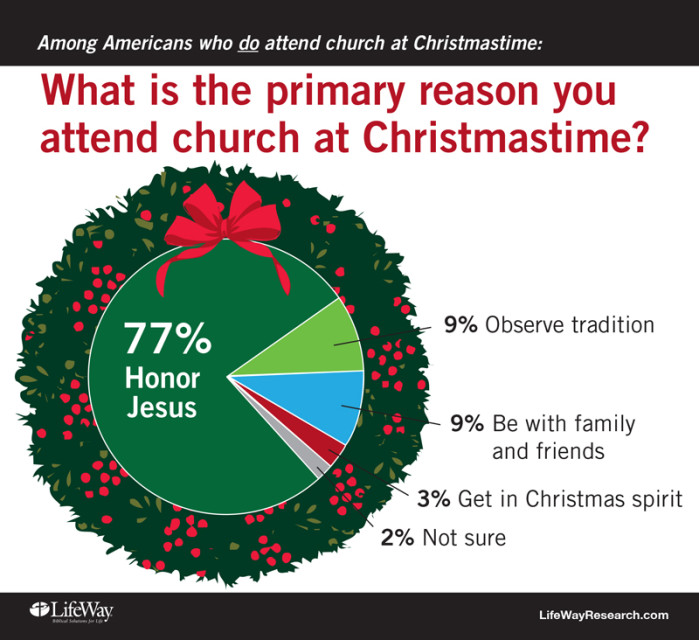 “Among Americans who attend church, what is the primary reason you attend?” Graphic courtesy of LifeWay Research

But the No. 1 reason most U.S. adults — Christians and many unbelievers, too — give for going to church at Christmastime is to “honor Jesus,” according to a new survey from the evangelical research agency LifeWay Research.

More than three in four of churchgoers (77 percent), Protestants and Catholics alike, said they were drawn to attend church to honor the birth of their savior, the fundamental religious experience of Christmas above and beyond all the seasonal fa-la-la-la-la.

Overall, six in 10 (61 percent) of the 1,000 U.S. adults surveyed, said they typically go to church during the festive weeks of December. And most of those with no such plans said they’d go — if someone invited them.

READ: ‘Christmas is all about Jesus’ signs pushed by pastors 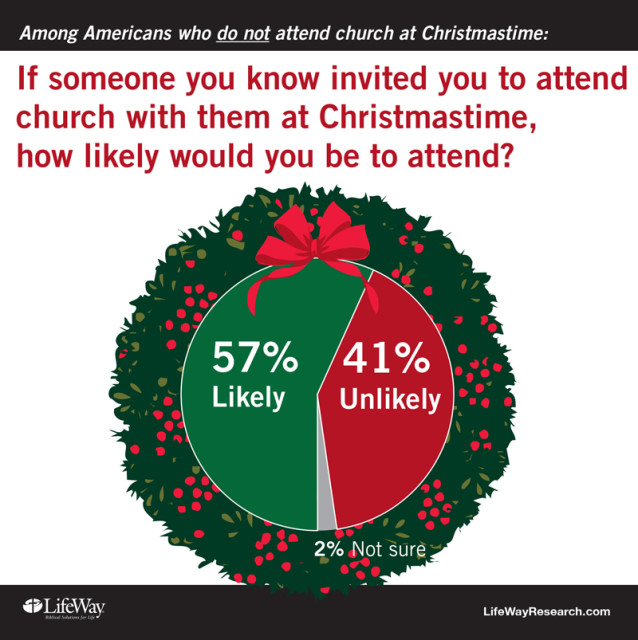 “If someone invited you, how likely would you be to attend church at Christmastime?” Graphic courtesy of LifeWay Research

Even among the “nones” (people with no religious identity) nearly three in 10 (29 percent) had plans to go to church. Many of those churchgoing nones, an umbrella term for atheists and for people who say they believe “nothing in particular” — also named Jesus as their primary reason for attending in the holiday season (47 percent).

“This is the first time we have asked these questions and we were surprised,” said LifeWay Research director Scott McConnell.

“People are so focused today on experiences. And with all the traditional events and family-friendly experiences being offered at churches to put you in the mood for Christmas, we thought those would be the big draw.

“But it’s not the experiences they are eating up,” he said. “They are there to honor Jesus.”

The other choices, such as observing tradition, being with family and friends, or getting in the Christmas spirit, each scored less than 10 percent in the overall survey. It was conducted September 14-28 and has a margin of error of plus or minus 3.6 percentage points.

However, family and friends do make a difference in Christmastime church attendance. The survey found that among those with no plan to attend a church (38 percent) at Christmastime, the majority (57 percent) say they likely might go if personally invited.

They would go to be with people they care about, “even if it weren’t something they would typically choose,” said McConnell.

For churchgoing nones, while nearly half cited Jesus as a reason to attend, 27 percent said they go to be with family and friends, 20 percent go to “observe tradition” and 6 percent want to “get in the Christmas spirit.” 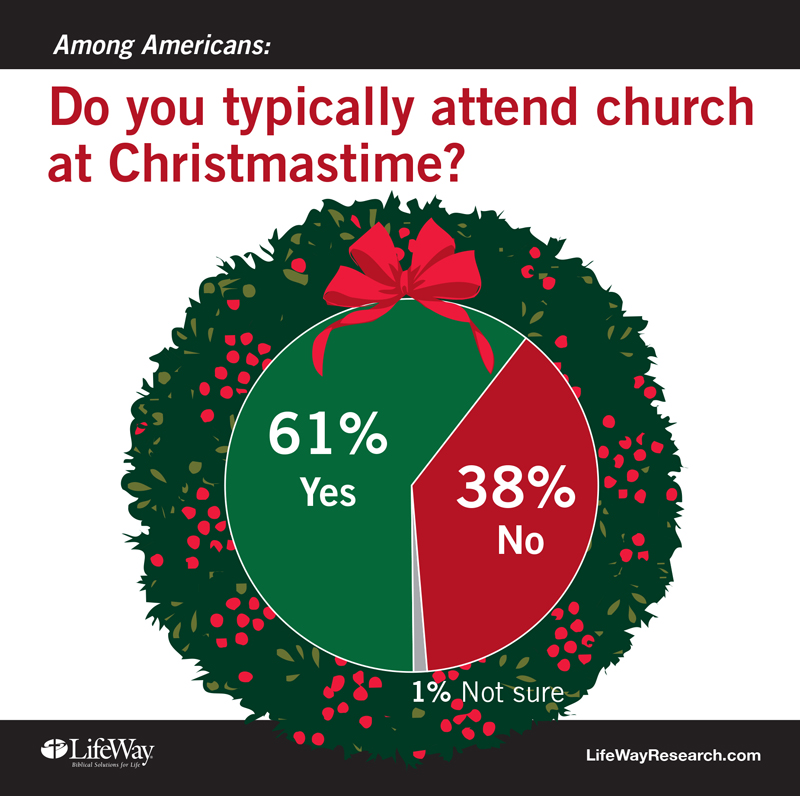 There’s a sense of connection to Christmas that still resonates for many nones, even if they don’t put a denominational brand label on themselves. A 2012 study by Pew Research, “’Nones’ on the Rise,” found 60 percent of people who say they believe “nothing in particular” also said they believe in God.

Still, devotion to the divine gets diluted if you think of Christmastime as a season, the way the question was presented in the LifeWay survey, rather than specifying church attendance on Christmas Eve or Christmas Day.

Marking Christ in Christmas throughout the holiday season drew only about a third of people’s attention (37 percent) in a 2010 LifeWay survey. Family and friends came first.

“Sure, people will say Jesus is the reason for the season, but Thor is the reason the fifth day of the week is named Thursday. That doesn’t mean I celebrate Thor,” LifeWay Research president Ed Stetzer told USA Today at the time. “The fact is, people don’t open the Gospel and read why Jesus came.”

Ahead of the Trend
‘God-denying’ women and self-replacing Christians: How religion changes birthrates
Follow us on Facebook!
Submit your photos to RNS