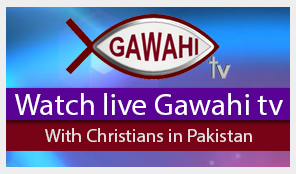 The Rev. Sarfraz William, owner and CEO of the Karachi-based television station, said that since the station’s equipment was completely lost in the fire, he has borrowed equipment to continue broadcasting concerts, prayers and church services during the busy Christmas season.

“We are doing God’s work and we are doing whatever we can to render our services on Christmas by resuming the transmission,” he said. “Though it is not in the way we had planned on Christmas, but something is better than nothing.”

William and his brother, Javed William, who also works at the station, described the Nov. 24 fire as deliberately set. They said locks were cut, and chemicals were sprayed to boost the flames and burn evidence of arson.

Local police dispute claims that the fire was an attack on Christians. Station House Officer Sarwar Commando told Religion News Service that an electrical short circuit caused the fire. But he could not say how it was determined that the fire was not an attack.

Nadeem Anthony, a Lahore-based lawyer and advocate for Pakistani Christians, described the fire as an act of religious intolerance.

“But it is impossible for them (the station owners) to point a finger at anybody, as in all other Christian persecution in Pakistan,” he said. If they did, he said, “it would be difficult for them to survive.”

READ: Persecution of Christians reached historic levels in 2014. Will 2015 be worse?

The fire at Gawahi TV is only the latest in a string of attacks on Pakistan’s Christians, who make up less than 2 percent of the overall population, or about 4 million people. More than a dozen people were killed in two bombings outside churches in Lahore in March, and last year a Christian couple were burned to death in an industrial kiln by a large mob.

And Aasiya Bibi, a 40-year-old Christian, has been in jail for six years after being convicted of blasphemy for allegedly desecrating a Quran. She was sentenced to be hanged but is appealing the ruling. Her case has brought worldwide scrutiny to Pakistan’s treatment of its religious minorities.

Open Doors, an American-based organization that advocates for minority Christians, ranks Pakistan as one of the top 10 places where Christians face the most persecution.

“We are very poor and were already hardly managing the work of God,” Javed William said.

Gawahi TV is one of only five Christian television stations in this country of 188 million people. It began broadcasting in 2013 and had plans to expand to eight other cities, including Lahore and the capital, Islamabad.

(Tanveer Ali is a freelance reporter based in Lahore, Pakistan)

News
In Oregon, churches and anti-fascists unite to provide mutual aid to fire evacuees and others in need
News
No race problem here: Despite summer of protests, many practicing Christians remain ambivalent
Opinion
Abraham would be proud
News
Her American father was shot in a blasphemy trial in Pakistan. Now she’s fighting for justice.
Faith
Pakistan’s persecution of Ahmadi Muslims must end
© Copyright 2020, Religion News Service. All rights reserved. Use of and/or registration on any portion of this site constitutes acceptance of our User Agreement and Privacy Policy, Privacy Statement and Cookie Notice. The material on this site may not be reproduced, distributed, transmitted, cached or otherwise used, except with the prior written permission of Religion News Service.