(RNS) Evangelist Franklin Graham has announced he is abandoning the Republican Party in disgust over the move by the GOP-led Congress last week to pass a budget that Graham said was “wasteful” and provided funding for Planned Parenthood, which he compared to the Nazis.

Graham has previously said he has no faith in any political party, but his apparent renunciation of his Republican affiliation is an indication of anger on the right and the strong interest many disaffected evangelicals have shown in populist outsiders such as Donald Trump.

Graham himself has expressed admiration for Trump, the surprise front-runner in the Republican presidential field, and has voiced support for some of Trump’s more controversial positions — such as his call to ban Muslims from the U.S. — which have drawn condemnation from more mainstream evangelical leaders.

The federal government provides $528 million in funding for Planned Parenthood — about 40 percent of the organization’s annual budget — primarily through payments to Medicaid for health services for low-income Americans. Federal law prohibits funding of most abortions, and Planned Parenthood separates federal taxpayer dollars from those used to provide abortions.

Social conservatives have long fought to strip taxpayer funding from Planned Parenthood, and after the release of a series of undercover videos by anti-abortion activists earlier this year, those calls ramped up to a fever pitch.

Activists said the undercover videos show Planned Parenthood officials negotiating the sale of fetal organs — which they called “baby parts” — for profit to medical researchers; making money off such organs or tissue could be illegal and unethical. Planned Parenthood denied that it was profiting from the sale and said it was quitting the practice.

The Planned Parenthood logo is pictured outside a clinic in Boston. The organization’s leader defended it before Congress on Sept. 29, 2015. Photo courtesy of Reuters *Editors: This photo may only be republished with RNS-GRAHAM-REPUBLICAN, originally transmitted on Dec. 22, 2015.

In the wake of that white-hot controversy, there was wide expectation that with Republicans in control of both the House and Senate, Congress would eliminate funding for 2016. Some conservatives in the GOP threatened to shut down the government if that wasn’t done.

But the shooting massacre at a Colorado Springs Planned Parenthood clinic late last month by a lone gunman, Robert Lewis Dear, who proclaimed himself “a warrior for the babies,” seemed to change the calculus, and congressional leaders last week reached a deal that averted a shutdown and funds the government through September of next year.

The deal also funds Planned Parenthood at previous levels — a development that has enraged many on the religious right, including Graham, son of the renowned evangelist Billy Graham. 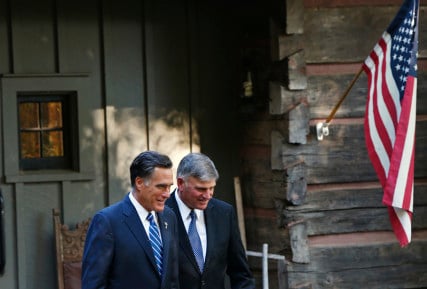 Republican presidential nominee Mitt Romney leaves the home of Reverend Billy Graham (not pictured) with Graham’s son Franklin, right, in Montreat, North Carolina on October 11, 2012. Photo courtesy of REUTERS/Shannon Stapleton
*Editors: This photo may only be republished with RNS-GRAHAM-REPUBLICAN, originally transmitted on Dec. 22, 2015.

“This is an example of why I have resigned from the Republican Party and declared myself Independent. I have no hope in the Republican Party, the Democratic Party, or Tea Party to do what is best for America,” the younger Graham declared on Facebook on Monday (Dec. 21).

He also seemed unconcerned about questions that harsh rhetoric could play a role in provoking attacks as he compared Planned Parenthood to the Nazis:

“Seeing and hearing Planned Parenthood talk nonchalantly about selling baby parts from aborted fetuses with utter disregard for human life is reminiscent of Joseph Mengele and the Nazi concentration camps!” Graham wrote. “That should’ve been all that was needed to turn off the faucet for their funding.”

Graham drew immediate support on social media, but how much sway he carries with voters is debatable.

Billy Graham, who is 97, infirm and largely incommunicado, over the years came to rue his involvement with politics, saying it drew the focus from his evangelism.

But his son not been hesitant to offer his opinion of politicians and in particular hot-button electoral issues of interest to social conservatives. In fact, in denouncing the Republican Party this week, Graham made a pitch for the prayer rallies he will hold in every state next year, starting in Iowa in January shortly before the crucial first presidential primary.

The rallies, as Graham says, aim to “challenge Christians to live out their faith at home, in public and at the ballot box.”

Graham has said that if more evangelical voters turn out it could prove the difference in national and local elections, a point also made by Republican candidates.