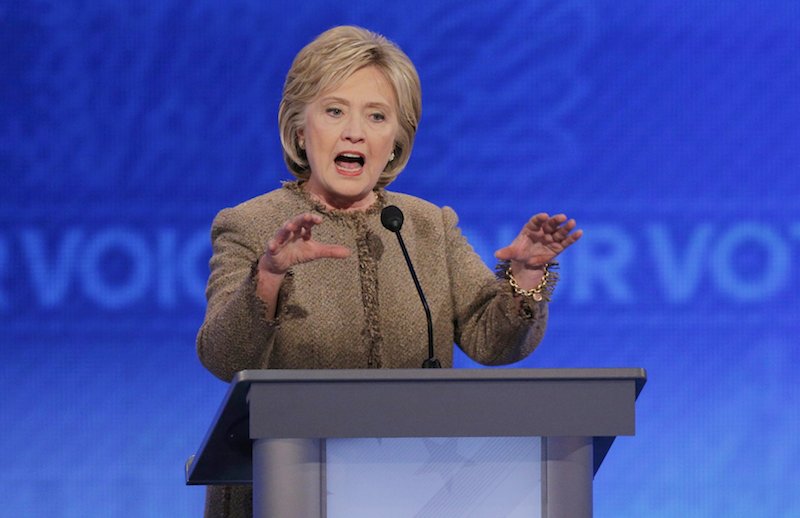 WASHINGTON (Reuters) – U.S. Republican presidential candidate Donald Trump said on Sunday that Democrat Hillary Clinton was a “liar” for claiming that his proposal to ban entry of all foreign Muslims into the United States has aided Islamic State’s propaganda efforts.

Speaking on NBC’s “Meet the Press,” Trump said Clinton had no evidence to back up a charge she made during a debate on Saturday that the Republican frontrunner is becoming the extremist group’s “best recruiter.”

“She’s a liar and everybody knows that,” Trump said. “She just made this up in thin air.”

Trump‘s call to ban all Muslims from entering the United States following a Jan. 2 attack in San Bernardino, California that killed 14 people has drawn widespread criticism from Republican rivals as well as Democrats like Clinton.

“They are going to people, showing videos of Donald Trump insulting Islam and Muslims in order to recruit more radical jihadists,” the Democratic frontrunner said.

Counterterrorism experts and Reuters reporters who monitor Islamist online activity have found no evidence so far that Islamic State has mentioned Trump in its official online accounts.

Asked to comment on Sunday, the Clinton campaign did not respond to Trump‘s charge but reiterated that Hillary Clinton‘s remark was based on evidence that supporters of the extremist group frequently cite Trump‘s comments to make the case that Americans hate Muslims.

It quoted a counterterrorism expert and linked to a tweet from a “very vocal ISIS supporter.”

For Clinton campaign chairman John Podesta, that’s enough to indicate that Trump is helping, not hurting, the jihadist group.

“That’s the interpretation we made,” Podesta said on “Meet the Press,” adding “I think it’s a very fair charge.”

Counterterrorism experts say it is nearly impossible to keep track of the torrent of online activity being generated by Islamic State and its sympathizers.

“There are very few analysts who have watched all of IS’s videos,” said counterterrorism analyst Daveed Gartenstein-Ross. “That being said, I believe Hillary Clinton‘s claim was false.”

“Donald Trump is in essence aiding and abetting the enemy with his comments. He’s making things worse, not better. There’s no denying that,” he said.