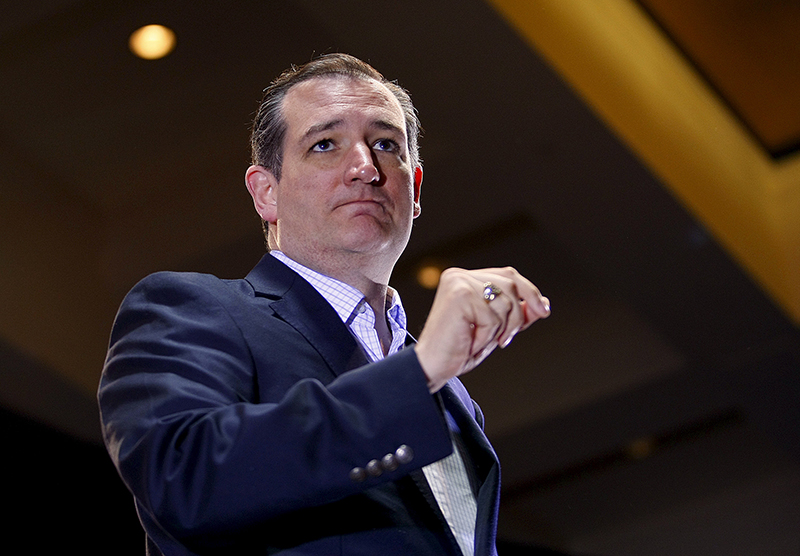 Republican presidential candidateTed Cruz addresses the RedState Gathering in Atlanta on Aug. 8, 2015. Photo courtesy of REUTERS/Tami Chappell
*Editors: This photo may only be republished with RNS-CRUZ-PP, originally transmitted on Aug. 25, 2015.

DES MOINES -- When Bob Vander Plaats, perhaps the most influential leader of the religious right in Iowa, announced his endorsement for Iowa's Republican caucuses, he heralded Ted Cruz's strict exclusion policy on immigration -- even though his chosen candidate was born in Canada to a mother who was a U.S. citizen.

Vander Plaats and his organization, the Iowa Family Leader, like to point out that they “address social issues from a biblical perspective,” and the website itself quotes 2 Corinthians 4:2: “We do not use deception, nor do we distort the word of God.”

Let’s start with the Hebrew Bible: “Do not oppress a foreigner. You yourselves know how it feels to be foreigners, because you were foreigners in Egypt” (Exodus 23:9).

The Hebrew Bible often instructs the Israelites to treat strangers with kindness and compassion precisely because they were once aliens themselves. The corollary here is that the U.S. often has been described as a nation of immigrants, which suggests that all of us -- Native Americans excepted -- once were foreigners.

Leviticus, one of the religious right’s favorite books of the Bible because of its apparent condemnation of homosexuality, contains plenty of advice for dealing with aliens:

“And if a stranger dwells with you in your land, you shall not mistreat him.”

“The stranger who dwells among you shall be to you as one born among you, and you shall love him as yourself; for you were strangers in the land of Egypt: I am the Lord your God.”

Further along, we find guidance for feeding strangers in our midst.

“When you reap the harvest of your land, do not reap to the very edges of your field or gather the gleanings of your harvest. Leave them for the poor and for the foreigner residing among you.”

Still later, the Bible suggests that aliens should be treated equally.

“You are to have the same law for the foreigner and the native-born.”

In the New Testament, Jesus beckoned his followers to care for “the least of these,” a description that I suspect would apply to refugees from Syria and those huddled at detention centers on our southern border. Jesus later described those who would be admitted into the kingdom of heaven as those who demonstrated acts of kindness toward people in need.

Those gestures would be reckoned as though they were directed to Jesus himself: “For I was hungry and you gave me something to eat, I was thirsty and you gave me something to drink, I was a stranger and you invited me in, I needed clothes and you clothed me, I was sick and you looked after me, I was in prison and you came to visit me,” (Matthew 25:35-40).

I acknowledge that a longer conversation is required to determine exactly how these biblical principles should apply to immigration policy, but it’s a conversation utterly missing from the current political debate, despite the faith claims of many of the candidates.

Cruz, the junior Republican senator from Texas and Vander Plaats’ choice for president who wants citizens to join his “National Prayer Team,” talks about building walls, tripling the number of border agents and stepping up deportations.

How is that consistent with the biblical mandate to welcome the stranger? How does that square with Vander Plaats’ own claim, “nor do we distort the word of God?”

Those who boast that the word of God informs their policies might want to take a moment to consider exactly what the Bible has to say.

(Randall Balmer is chairman of the religion department and director of the Society of Fellows at Dartmouth College in Hanover, N.H.  This editorial first appeared in The Des Moines Register.)