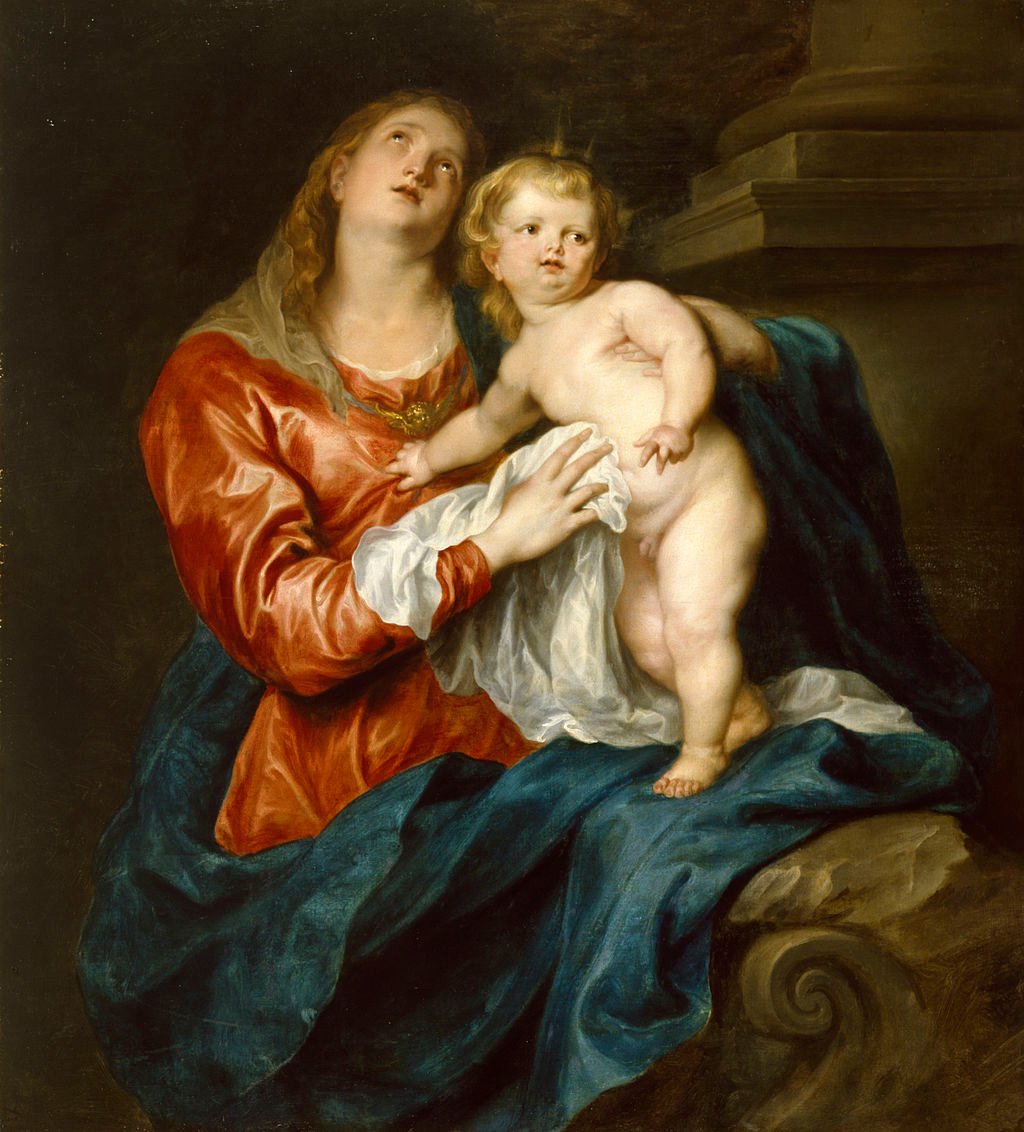 This Virgin and Child subtly incorporates traditional allusions to the miraculous. Mary's long, loose hair identifies her as a virgin, alluding to the virgin birth.
December 23, 2015
Kimberly Winston 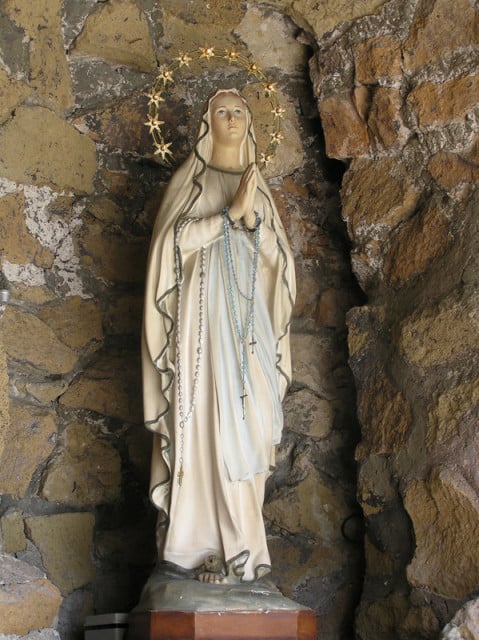 These words, attributed by the Gospel of Luke to an obscure Jewish girl more than 2,000 years ago, were prophetic -- today, the Virgin Mary is everywhere. Look around:

Churches and shrines are named for her everywhere.

Some see her influence in the flag of the European Union, with its background of blue -- a color often associated with Mary in art -- and halo of golden stars similar to ones seen on her statues. She is revered by Hindus in India, and Muslims hold her above all other women.

Apparitions of Mary number more than 2,000.

Medjugorje, Guadalupe, Lourdes and Fatima attract millions of people each year, many of them non-Catholics. People think they see her face in water stains, slices of toast, rock formations. A grilled cheese sandwich with her "face" sold for $28,000 in 2004.

She is among the most popular of tattoos.

And she's appeared in over 80 comic books. Her face and form grace everything from dog T-shirts and drawstring pants to one-of-a-kind rhinestone leather and denim jackets. Hugh Morgan, from Las Vegas, shows his Japanese inspired Virgin Mary tattoo, in front of a cardboard cut-out of Pope Francis, during an event organised by Christa Scalies, the co-creator of the Pop-Up Pope, in Fado Irish Pub & Restaurant in Philadelphia, Pennsylvania, on September 16, 2015. Photo courtesy of REUTERS/Mark Makela
*Editors: This photo may only be republished with RNS-VIRGIN-POWER, originally transmitted on Dec. 23, 2015.

Fifteen novels have been written about her in the past 20 years alone.

An untold number of scholarly papers have detailed her imagery in everything from "The Lord of the Rings" to “Buffy the Vampire Slayer.”  In 2012, she became a Broadway star in the play “The Testament of Mary." 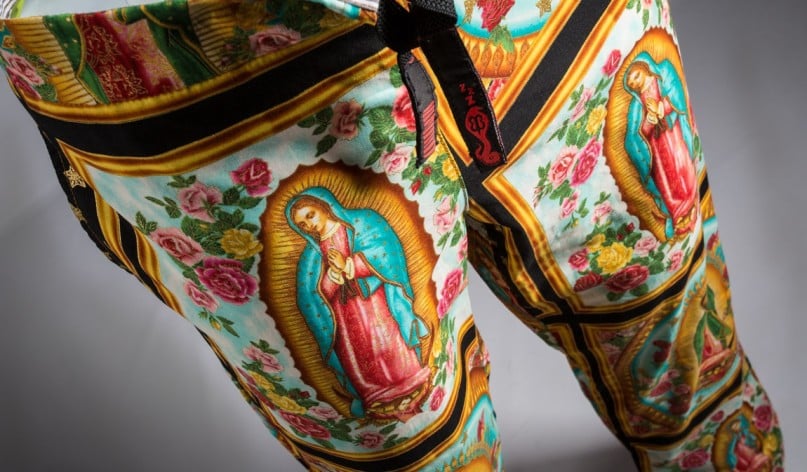 She graced the December cover of National Geographic.

The headline proclaimed her “the most powerful woman in the world.”

"No other woman has been as exalted as Mary," Maureen Orth writes in National Geographic. "As a universal symbol of maternal love, as well as of suffering and sacrifice, Mary is often the touchstone of our longing for meaning, a more accessible link to the supernatural than formal church teachings. Her mantle offers both security and protection. Pope Francis, when once asked what Mary meant to him, answered, 'She is my mama.'”

READ: The ‘Splainer: Is the star of Bethlehem for real?

What is behind this mystique? Can she really be considered "the most powerful woman in the world" when most Protestants and evangelicals keep her firmly in the background?

"Without question she is the most powerful woman in the world," said S. Brent Plate, a professor who studies religion and popular culture. But that power comes not so much from who she was but from who she can be. Like Buddha and Jesus, he continued, she can be all things to all people, light- or dark-skinned, rich or poor. She has been appropriated by dozens of different interest groups, including Mexican farmworkers, feminists and anti-abortion activists.

"There is no one Virgin Mary," Plate said. "She becomes more powerful by the ongoing remaking of her."

Ken Chitwood, a scholar who writes about religion and popular culture, said just this month he has seen the Virgin Mary in graffiti in Los Angeles, in a shrine in Miami and on a pair of men's drawstring pants, price $78. He says she is especially popular among millennials and "nones" -- people with no religious identification.

"Mary is super-cool," Chitwood said. "She’s not even trying to be cool and she’s cool. She's even cooler than Jesus in some ways."

And that's her special appeal to the young and unaffiliated. Mary is outside the boundaries of any institution.

"Young, hipster, spiritual-but-not-religious people find her appealing because she represents the power of the people," Chitwood added. "We make her in our own image."

One reason we can do this is because we know so little about Mary. She speaks only four times in the Bible, mostly in one-sentence utterances. We are told nothing of her inner life, her feelings at being singled out by God to bear Jesus, only that at the visit of the wise men she "pondered these things in her heart." She is silent even at the foot of the cross, watching her son die a horrible, tortured death.

"So much of who she is and was is left to our imaginations," said the Right Rev. Mariann Budde, Episcopal bishop of Washington, D.C. "From that comes an ability for us to find a connection to God that is both gentle and strong, loving and bold. There is a sense of the approachability with Mary and, for me, a place of great freedom to think about her example of one who said 'yes' to such an amazing thing."

Jon Sweeney, author of "Strange Heaven: The Virgin Mary As Woman, Mother, Disciple and Advocate," is not convinced Mary is the "most powerful woman in the world." Devotion to Mary, he said, is not as strong as it was two, three or four generations ago, largely because of the decline of the power of institutionalized religion. Still, he sees Mary finding greater acceptance among Protestants who once relegated her to an annual appearance in the Christmas pageant.

"Mary is increasingly a bridge between Protestants and Catholics among those under the age of 40 because for them, increasingly, it isn't the doctrines of Mary that matter but the stories of her faith, both from the Bible and beyond, that are so beautiful as to inspire faith," he said.

And Mary has the potential to cross other bridges as well. Elizabeth Hayes Alvarez, author of a forthcoming book about Mary in American history, said that when she teaches a religious history course at Temple University, Muslim students and Christian students find common ground.

"There is an energy and a joyfulness in those classes," she said. "My students from Kuwait and Saudi Arabia, they light up. And the evangelicals are happy Mary is in the Quran. It makes me more optimistic about the future, but I don’t know how far it will go."