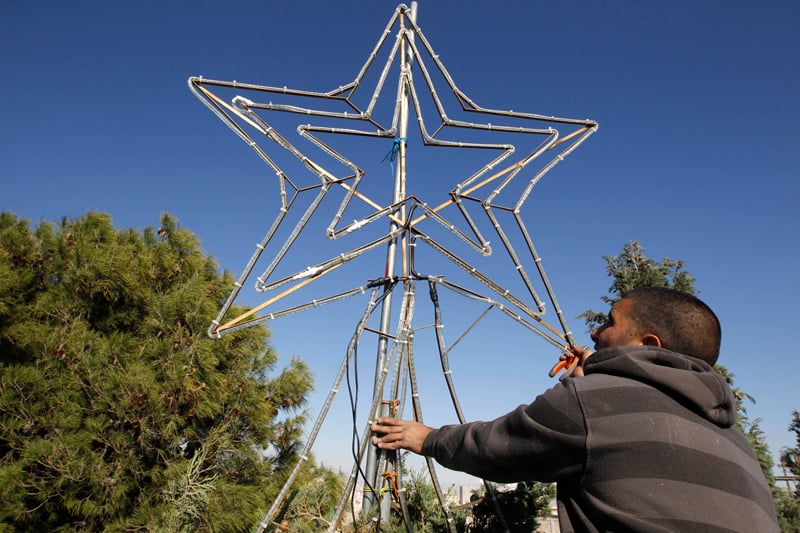 A Palestinian municipal worker places a star on top of a tree before the annual lighting ceremony of a Christmas tree at Manger Square in the West Bank town of Bethlehem on Dec. 15, 2010. Photo courtesy of REUTERS/Ammar Awad
*Editors: This photo may only be republished with RNS-STAR-SPLAINER, originally transmitted on Dec. 21, 2015.

(RNS) The famous “star of wonder, star of night,” the focus of more than one Christmas song, hangs over every creche and sits atop most Christmas trees.  What was the astronomical event we now call the star of Bethlehem that guided the wise men, or Magi, to Jesus in the manger? Was it “a star dancing in the night,” or was it something more dramatic, like a supernova or even a UFO? There is science behind the manger story. Let us ‘Splain …

Q: What is the star of Bethlehem?

A: The star of Bethlehem is the name given to an event in the night sky that the Gospel of Matthew says heralded the birth of Jesus. Three wise men — or Magi, or kings — went to King Herod and asked, “Where is the one who has been born king of the Jews? We saw his star in the east and have come to worship him.”

After the kings went on their way, “the star they had seen in the east went ahead of them until it stopped over the place where the child was,” according to Matthew.

So we have a moving star in the east big enough to notice above others with the naked eye.

Q: So it was probably a comet, right? They are big and bright and they move across the sky.

A: It could have been a comet. Comets have been known since ancient times. They can be seen with the naked eye, move and have tails — a train of cosmic dust that burns off as they approach the sun. Perhaps the tail of the comet pointed the wise men to the manger.

But as David Hughes, a British astronomer who wrote about the star of Bethlehem in 1976, told the BBC: “The snag is that they’re not that rare. They were also commonly associated with the ‘four Ds’ — doom, death, disease and disaster. So if it did contain a message, it would have been a bad omen.”

Q: I saw “Star Wars.” Could it have been an exploding Death Star?

A: No. Not everything this December is about “Star Wars.” However, astronomers have investigated the star of Bethlehem as the birth of a star — a nova — that shines very bright and then fades over a few months. Same problem as a comet — not that rare. How about, they asked, a supernova — an explosion so big it outlines an entire galaxy?

Just one problem, says Brother Guy Consolmagno, a Vatican astronomer and co-author of the book “Would You Baptize an Extraterrestrial? And Other Questions from the Astronomers’ In-Box at the Vatican Observatory.”

“There are no independent reports of a supernova around the time Jesus was born,” Consolmagno writes. “And there are no unaccounted-for supernova remains from two thousand years ago. So it seems to me that astronomy can pretty much rule out the idea that the Star of Bethlehem was a supernova.”

A: If you are a fan of “Monty Python’s Flying Circus,” then you know Jesus — in the form of his stand-in, Brian — had experience with UFOs.

Let’s assume the Pythons were just joking. That leaves planets. But a single planet would not have caused ancient astrologers to notice something out of the ordinary. John Mosley, an astronomer at the Griffith Observatory in Los Angeles, has explored the possibility that the star of Bethlehem was actually a “planetary conjunction” — an alignment of one or more planets with the sun and the Earth. He notes there was a series of rare planetary conjunctions in the years 3 and 2 B.C. At that time, Venus and Jupiter were close to each other and appeared in the constellation Leo — which the Jews often associated with their destiny.

READ: ‘Star Wars’: The return of the transcendent (COMMENTARY)

As if that weren’t enough, Jupiter, he says, passed in front of the star Regulus — which means “king” — three times. “The whole sequence of events could have been enough for at least three astrologers to go to Jerusalem and ask Herod, ‘Where is he that is born King of the Jews, for we have seen his star in the east and are come to worship him.’”

(Kimberly Winston is a national correspondent for Religion News Service)