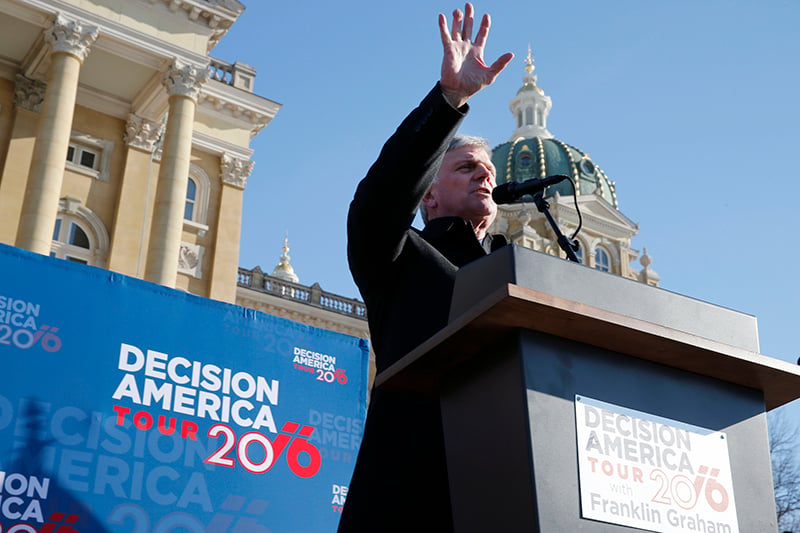 A large crowd listens on as Franklin Graham speaks to Christians during a prayer rally on the West Terrace of the Iowa State Capitol as part of the Decision America Tour on Tuesday January 5, in Des Moines, Iowa. Photo by David K Purdy, courtesy of Billy Graham Evangelistic Association

(RNS) Evangelist Franklin Graham kicked off a “Decision America Tour” on Tuesday (Jan. 5) in Des Moines, Iowa, urging evangelical Christians to pray about the upcoming election and vote for candidates of any party who agree with their biblical values.

“Our moral walls and gates are down,” said Graham, standing before 2,600 people at the state’s gold-domed Capitol. “Any type of wicked thought and activity can come and go and our educators and our politicians and our churches seem many times to be more concerned about political correctness than God’s truth and his righteousness.”

Graham said that praying and voting Christians are needed to address the troubles facing the country. But, two weeks after he announced his departure from the Republican Party, he said no one party has the answer.

The crowd, bundled up in warm coats and knit hats with some holding small American flags, cheered.

Saying “America needs the Christian vote,” Graham proposed next steps after the rally, which he intends to replicate across the country from Jan. 12 in Tallahassee, Fla., to March 31 in Sacramento, Calif. Some prayer rallies are still in the planning stages.

The tour’s website includes a three-point pledge for people to commit to pray, vote and consider running for office.

Noting the millions of evangelicals who stayed home during the 2012 election, Graham asked ralliers to make sure their relatives — including nieces and nephews — were registered to vote and to form groups to pray for their communities. Faith
How Putin’s invasion became a holy war for Russia