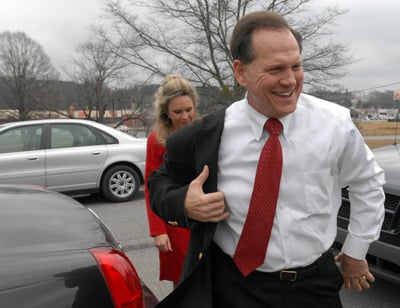 Roy Moore, forever known as Alabama’s Ten Commandments judge, has been re-elected chief justice in a triumphant political resurrection after being ousted from that office nearly a decade ago. By Kim Chandler.

Federal prosecutors in Alabama said probate judges should issue marriage licenses to same-sex couples despite being told otherwise by the state’s chief justice, but at least two counties on Thursday stopped giving out the licenses altogether.

“Government officials are free to disagree with the law, but not to disobey it,” the prosecutors said in a statement. “This issue has been decided by the highest court in the land and Alabama must follow that law.”

Moore said in an administrative order on Wednesday that Alabama judges were bound by the state Supreme Court’s ruling last March halting same-sex marriage until that court determines the effect of the national ruling on the state.

Gay marriage supporters denounced Moore’s order and predicted it would be ignored.

But at least a couple of county probate judges stopped issuing marriage licenses altogether as a way to comply with the conflicting court rulings.

Marriage licenses were halted for all couples, same-sex or otherwise, in Mobile County, according to that office’s website. Elmore County took the same step, a staff member there said.

Madison County Probate Judge Tommy Ragland said his office in Huntsville stopped giving marriage licenses to same-sex couples on Wednesday but resumed handing them out a day later after the county attorney approved it.

“We have a chief justice who is confused,” Ragland said.