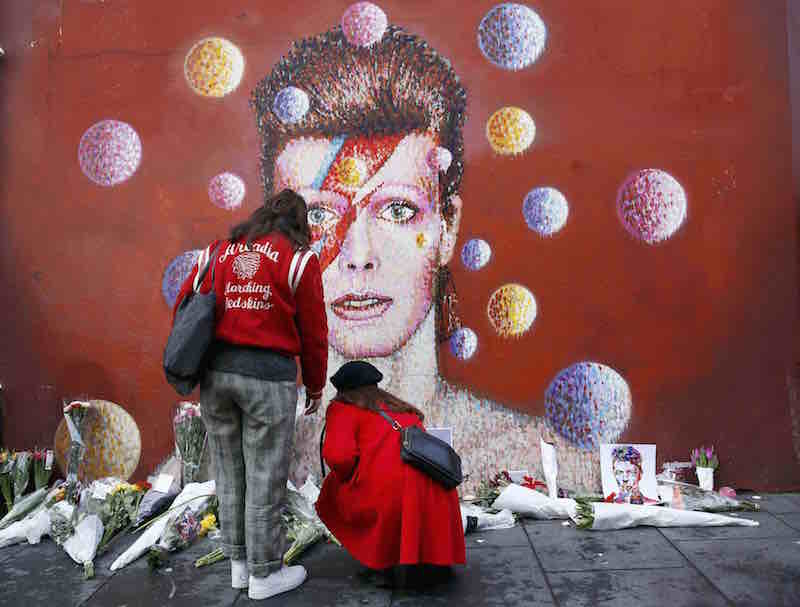 Two women stop at a mural of David Bowie in Brixton, south London, January 11, 2016. By Stefan Wermuth courtesy of Reuters

(RNS) The legendary musician and showman David Bowie was as mutable and enigmatic about his religious views — such as they were — as he was about his music and art (and gender-bending fashion choices).

Yet his death from cancer on Sunday at 69 brought tributes from religious leaders who knew talent when they saw it, and perhaps recognized that Bowie’s crossover style would inevitably touch the ineffable as he constantly looked for meaning — and novelty.

“I’m very, very saddened to hear of his death,” Archbishop of Canterbury Justin Welby, leader of the Anglican Communion, told the BBC. “I remember sitting listening to his songs endlessly … and always really relishing what he was, what he did, the impact he had.”

And Greg Thornbury, the bow-tie wearing president — and guitar-lover — of a leading evangelical school, The King’s College in New York City, tweeted a photo of himself performing Bowie:

One of the first to note the rocker’s passing was a senior Vatican official, Cardinal Gianfranco Ravasi, head of the Vatican’s Council for Culture, who tweeted the famous lyrics from Bowie’s 1969 classic, “Space Oddity”:

Ground Control to Major Tom
Commencing countdown,
engines on
Check ignition
and may God's love be with you (David Bowie)

Ravasi has a reputation as a savvy intellectual who quotes the likes of the late Amy Winehouse and writes his own tweets, and his comment was among the Bowie tributes that zipped around social media.

One commenter on Ravasi’s thread asked when the Vatican would begin the process of canonization for Bowie: “We have the miracles, just listen to his records,” wrote Sebastiano.

But another noted Bowie’s lyrics from the 2000 song, “Seven”:

“The gods forgot that they made me

So I forget them, too

I dance among their shadows

I play among their graves”

So where was Bowie on the religious spectrum? Apparently everywhere, just as he was on the aesthetic spectrum, from the time of his youth in England where he was born David Robert Jones:

“I was young, fancy free, and Tibetan Buddhism appealed to me at that time,” he told comedian and talk show Ellen DeGeneres in 2007. “I thought, ‘There’s salvation.’ It didn’t really work. Then I went through Nietzsche, Satanism, Christianity … pottery, and ended up singing. It’s been a long road.”

And the road did not end — it never did for Bowie.

He and his wife lived in Lower Manhattan and witnessed the Sept. 11 terror attacks on the Twin Towers, a profound and disillusioning experience that led him to produce the album “Heathen” the following year.

“Questioning my spiritual life has always been germane to what I was writing. Always,” he told Beliefnet in 2003. “It’s because I’m not quite an atheist and it worries me. There’s that little bit that holds on … “

“I’m almost an atheist,” he repeated with a laugh. “Give me a couple of months.”

Whether he got there or not isn’t clear. As he noted at the end of the Beliefnet interview, he was surprised at how he had settled down, becoming a happily married father and family man — the performer who loved to subvert every cliche becoming a cliche himself, and wonderfully so:

As blogger Tom Kershaw noted, “Perhaps Bowie is just more disenchanted with religion than he is with the concept of God.”

Makes sense. After all, here was an artist who could perform “The Little Drummer Boy” with the classic crooner Bing Crosby — and have that retweeted decades later by Southern Baptist leader (and Johnny Cash fan) Russell Moore: