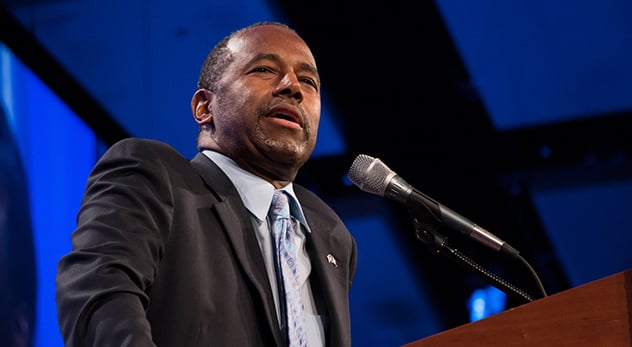 Dean Parker is a "born-again Christian" who has served as Ben Carson's finance chairman. He resigned today amid reports that he had run an excessive campaign of "big spending." - Image courtesy of Iprimages (http://bit.ly/1n3vl5c)

Among the allegations are that Parker was paying himself $20,000 per month for a role some say is typically unpaid and frivolously allocating campaign donations. As Politico reported, “The bottom line is a small fraction of the millions spent on direct mail, phone solicitations and list-building in the same period.”

But Parker says the reports do not accurately recount all the facts and have been orchestrated by the media in an effort to destroy Carson’s credibility. Instead, Parker says, his involvement with the campaign is a simple story of two Christian friends who partnered on an unlikely presidential campaign out of a mutual desire to “save America.”

Parker says he first met Carson after the now infamous National Prayer Breakfast in 2013 where Carson criticized President Barack Obama on issues ranging from healthcare to the national debt. Conservatives such as Rush Limbaugh, Sean Hannity, and Jonah Goldberg extolled the speech as courageous. The Wall Street Journal responded with an editorial bearing the bold, if prophetic, title, “Ben Carson for President.”

Parker visited Carson in his Palm Beach, Florida home following the event where he says they spent a few hours together and “hit it off.” Before Parker left, he says Carson looked at him and said, “God’s going to do something great with us, but I don’t know what that is.”

In May of 2015, the “something great” turned out to be an appointment as Carson’s national finance chairman. Parker, who calls himself a “born-again believer” and attends Dayspring Baptist church in Mobile, Alabama, says when the job was offered to him, he made the decision on the basis of faith and family, not finances.

“This was never about a business deal or making money,” Parker says. “I prayed about and talked to my family and finally my daughter told me, ‘Take the job and go save the country.’”

Parker’s time serving as finance chairman was marked by many successes by any reckoning. Under his watch, the campaign raised more than $54 million in donations, many of which came from large numbers of small gifts.

But matters grew dire when Kyle Cheney, a reporter for Politico, began asking Parker questions about the way he was allocating funds. Cheney is the same reporter who broke a story claiming Carson fibbed about receiving a scholarship to West Point scholarship in November of 2015. Cheney’s reporting was later called into question and both the headline and some of the story’s wording were changed.

Parker claims that some of the information Cheney reported was not publicly accessible, and therefore, must have been leaked from Carson campaign staffers. He says he does not know who would have given the information to Cheney, and does not wish to speculate.

Additionally, Parker says that Cheney has not fairly recounted all the facts. The story stated, for example, “Parker recently began earning a $20,000 monthly salary.” But Parker claims he was not compensated at all last year and worked only as a volunteer. He said he cannot comment on his proposed 2016 compensation except to note, “The first check I would have received would have been in 2016.”

Parker also feels that it is not entirely fair to claim that any questionable fund allocations were solely his fault.

“Every penny that was paid to my company was passed through expenses, and every expense report was reviewed by a third party,” he says. “Dr. Carson thought it was all appropriate. We wanted it done with integrity.”

After Cheney’s story published claiming that Parker has mishandled funds, the finance chairman resigned immediately. He says he did not want to be a distraction to the campaign less than three weeks out from the Iowa caucus.

Carson is currently in fourth place in Iowa polls with only 7.6 percent. While Carson was one a favorite among religious voters, who are highly influential in Iowa, he has been in a precipitous decline in the state’s public opinion polls since November.

As the Carson campaign seeks to fill the void left by Parker, the discharged finance chairman says he has nothing negative to say about the candidate. He will continue to serve the campaign in an unspecified volunteer capacity, and hopes that all voters—religious or not—will rally behind the man who delivered a passionate speech at the National Prayer Breakfast nearly three years ago.

“Nothing has changed when it comes to Dr. Carson,” Parker says. “He is a born again believer and a wonderful man of God who does everything in a Christ-centered way. He’s the best candidate out there.”

Related Posts
By Amy Klein
What good is faith when your fertility treatments aren't working?
By Adelle M. Banks
Promise Keepers stages a comeback on screens instead of in a stadium
By Alejandra Molina
‘Your fight is my fight’: Latino clergy and faith leaders rally behind Black Lives Matter
By Alejandra Molina
Who is Junipero Serra and why are California protesters toppling statues of this saint?
By David Crary
Amid pandemic, scores of US Catholic schools face closure