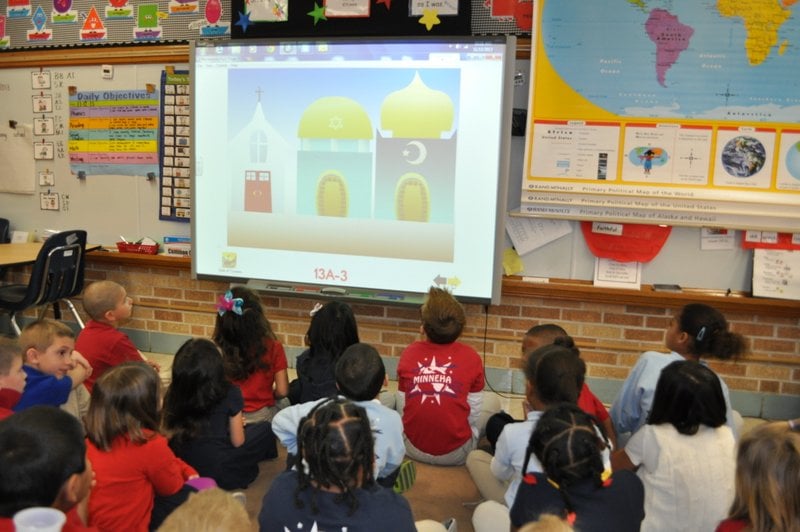 First-graders at Minneha Core Knowledge Elementary School in Wichita, Kan., learn about different houses of worship as part of their school’s world religions curriculum, on Nov. 13, 2013. The school, which uses a curriculum founded by education researcher E.D. Hirsch, teaches about the world’s religions in several grades as part of social studies. Religion News Service photo by Linda K. Wertheimer

(RNS) Opponents of lessons on Islam often claim that Christianity takes a back seat in public schools’ religious instruction. That’s what an Augusta County, Va., mother argued recently when she opposed a teacher’s use of the Muslim statement of belief in a calligraphy exercise. She held a forum at a local church to protest how her religion wasn’t allowed in schools, but Islam was.

Evidence, however, points to the contrary.

A much bigger problem is pro-Christian and anti-Muslim bias that some educators may bring into the classroom. Sometimes that bias, promoted by policymakers involved in textbook adoption or aimed at a Muslim student in a classroom, is intentional. Other times, teachers may be unaware how their personal beliefs can color the way they teach.

RELATED STORY: How schools overlook religious harassment and what to do about it (COMMENTARY) 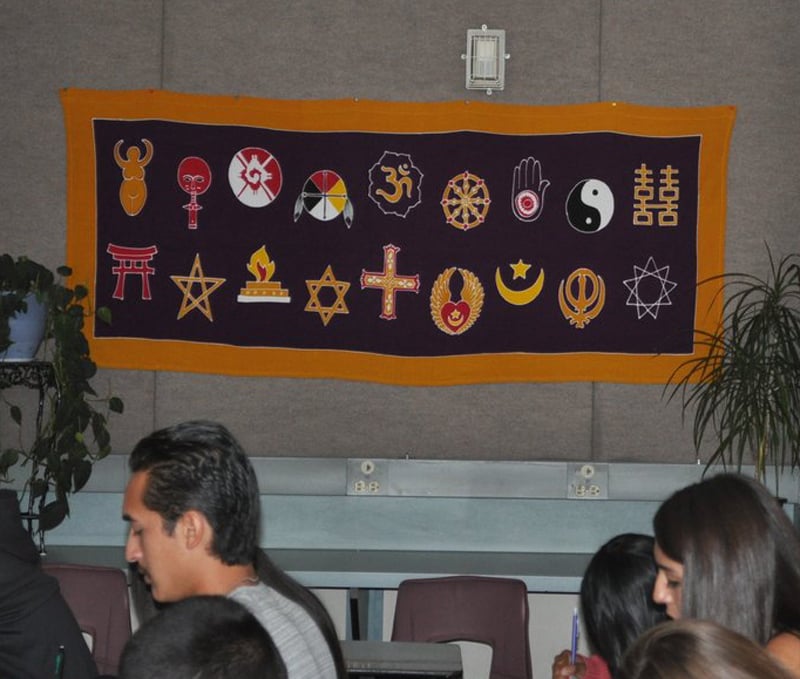 Uproars over lessons on Islam have happened nationally. Protesters, whether objecting to a guest speaker on Islam in a Tampa, Fla., high school or a mosque field trip by a suburban Boston middle school, respond with accusations of indoctrination. Hate and fear of Muslims take center stage.

In Augusta County last month, school officials shut down the school system for a day in response to hate-filled emails and threats. The objections overshadow a critical need in education that requires addressing, given increasing anti-Muslim sentiment. Terrorist attacks have fueled the hate, as has presidential candidate Donald Trump’s call to bar Muslims from entering the U.S.

Yet even educators who have taught about world religions as part of state standards for nearly two decades tend to know very little about Islam.

They often lack resources and training to teach about Islam in a balanced and nuanced way. At most, they may have taken a world history or comparative religion course in college.

Textbooks aren’t always a reliable resource, and reviews by religion scholars have been a mixed bag. Some books gave balanced treatment, but others skewed in favor of Christianity and against Islam. Some texts repeat the fallacy that Islam was spread only by violent means, while Christianity was only spread peacefully via missionaries.

Some teachers may not be able to sift out such bias, given Americans’ lack of knowledge about religion. On average, Americans were able to answer half of 32 questions correctly about world religions in a 2010 Pew Research Center questionnaire.

I interviewed teachers around the country for my book, “Faith Ed.,” about schools’ efforts to teach about world religions. All were sincere in their desire to present a balanced, accurate view. Some received special training in world religions and visited different houses of worship to learn more. Some did exchange programs with teachers from the Middle East. They could teach objective, layered lessons that used facts to confront common stereotypes.

But several teachers also told me that they experienced the most discomfort when teaching about Islam.

After the 9/11 attacks, a fourth-grade teacher said it gave her comfort to know she had Muslim students because she could look at them and realize they were no different from her. “They just pray to a different God,” she told me. “They pray to Allah. I pray to God.” But of course, “Allah” is the Arabic word for God.

The teacher said she put her own beliefs aside when she taught a unit on Islam, but could she keep herself from acting as if Christianity was the norm and Islam the most foreign faith?

Teachers may also inadvertently promote stereotypes, including how Muslim women dress. Muslims, like followers of any religion, vary widely in how they practice their faith.

In the controversies over lessons on Islam, the debates focused on the lessons’ effect on non-Muslims. In Virginia, the teacher’s choice to use the Muslim statement of faith for a calligraphy exercise was unwise, but not only because non-Muslims might feel they’re being asked to write out belief in another faith. Such an exercise also could offend Muslims. The school system rightly decided to use something other than a prayer for future calligraphy exercises.

Sadly, the furor over lessons in Islam could damage efforts to improve instruction about religion, given the country’s past experience. In the 1960s, after a Supreme Court ruling prohibited teacher-led prayer but encouraged teaching comparative religion, religion scholars began pushing for improving training of teachers.

But it was the 9/11 attacks that renewed the most interest. Educators realized, as they do now, that ignorance fuels Islamophobia. The First Amendment Center and the American Academy of Religion in recent years published guidelines for teachers on handling and teaching about religion in public schools. The problem is, many teachers have never seen those guides.

Public school teachers also deal with another challenge. Only a little more than a third of Americans know it’s legal to teach about comparative religions.

We’re at a worrisome crossroads. There’s a movement afoot to promote Christianity when the focus should be on educating about many religions. Linda K. Wertheimer, a former education editor of The Boston Globe, is the author of “Faith Ed.: Teaching About Religion in an Age of Intolerance.” Find her on Twitter @lindakwert. Photo by Michael Benabib

The more we learn about the beliefs, practices and history of different religions, the better. Such education helps us interpret current events and literary references. It also helps reduce bullying of religious minorities, especially when teachers emphasize avoiding stereotypes and asking respectful questions about religion.

Instead of throwing around accusations of indoctrination when the intent is clearly teaching and not preaching, let’s have reasoned dialogue about the best way to teach about religion. Let’s provide more resources and training to teachers. There are much better approaches than spewing so much hate and threats that a school system shuts down.

(Linda K. Wertheimer, a former education editor of The Boston Globe, is the author of “Faith Ed.: Teaching About Religion in an Age of Intolerance.” Find her on Twitter @lindakwert.)