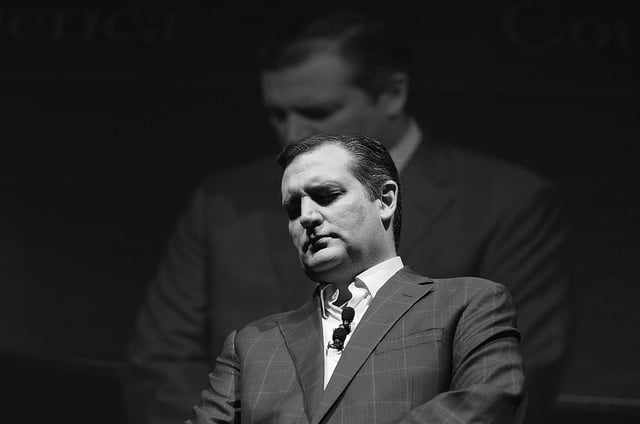 A couple of days ago, David Brooks wrote a column at the New York Times on "The Brutalism of Ted Cruz." Brooks wrote about Cruz's penchant in his campaign for battle language and his exploitation of the fact that "many evangelicals feel they are being turned into pariahs in their own nation." Ultimately, Brooks concluded that Cruz's hyperbole has been unwarranted; that "Obama has championed a liberal agenda, but he hasn’t made the country unrecognizable."

That last phrase brought to mind a letter that I read years ago. Back in 2008, the conservative Christian organization Focus on the Family used some of these Cruzian tactics to write a "Letter from 2012 in Obama's America." The letter was written in October 2008 as a reflection from a Christian four years in the future, lamenting the state of America since Obama was elected President. It started on a defensive note:

This letter is not “predicting” that all of the imaginative future “events” named in this letter will happen. But it is saying that each one of these changes could happen and also that each change would be the natural outcome [of an Obama presidency.]

Nevermind the irresponsibility of this kind of speculation; love of truth alone should be enough to keep Christians from engaging in this kind of fear-mongering. It continues, as the preface ends and the letter begins, in a dramatic fashion:

Dear friends, I can hardly sing “The Star Spangled Banner” any more. When I hear the words, O say, does that star spangled banner yet wave O’er the land of the free and the home of the brave? I get tears in my eyes and a lump in my throat. Now in October of 2012, after seeing what has happened in the last four years, I don’t think I can still answer, “Yes,” to that question.

So, what happened? What events did Focus on the Family feel so sure would come to pass that they felt compelled to write this letter? Let's take a look:

What they predicted: John Paul Stevens and Ruth Ginsburg would retire from the Supreme Court only to be replaced by "two far-Left, American Civil Liberties Union-oriented judges." Justice Kennedy would resign, followed by Justice Scalia, who was inexplicably struck with health problems. All would be replaced by liberals and the Supreme Court would be controlled by the Left.

What happened: Ginsburg, Scalia, and Kennedy are all still serving on the Supreme Court. David Souter, who had a record of voting with liberal members of the court, did retire. Obama nominated Elena Kagan and Sonia Sotomayor to the Supreme Court. Sotomayor is a reliable member of the liberal voting bloc but has sided with the more conservative justices on significant decisions; Kagan is a moderate Democrat.

What they predicted: Same-sex marriage would be legalized in all 50 states.

What happened: Yep. But it was in June of 2015 and, contrary to Focus on the Family's predictions, the Boy Scouts have not disbanded, elementary schools do not include compulsory training in gender identity starting in first grade, there are plenty of Christian adoption agencies still operating in the U.S, and gay people aren't given "special bonuses for enlisting in military service" to make up for past discrimination.

What they predicted: High school students could no longer hold "See You At The Pole" prayer meetings because the Supreme Court ruled it "proselytizing."

What happened: See You At The Pole still exists and is still federally protected as free speech.

What they predicted: Campus ministries like InterVarsity and Campus Crusade for Christ (now CRU) would cease to exist, or at least have shrunk to "skeletons" of their former selves.

What happened: InterVarsity just hosted its  every-three-years gathering in St. Louis with thousands of attendees worshiping together and a national conversation about racial justice and the Black Lives Matter movement. They are thriving on college campuses across the nation. Cal State colleges did implement a practice that would not have recognized InterVarsity's official status on their campuses, but that dispute ended in 2015 and InterVarsity is again a recognized student group.

What they predicted: Obama would repeal the Hyde Amendment, which restricts Medicaid from paying for certain abortions. He would also reverse the Partial-Birth Abortion Ban Act of 2003.

What happened: The Hyde Amendment is still in place. So is the Partial-Birth Abortion Ban Act.

What they predicted: It would be illegal for private citizens to own guns for self-defense in eight states and counting, and "Inner-city violent crime has increased dramatically."

What happened: U.S. gun ownership has declined slightly in recent years, a fact which can only have to do with personal preference because owning a gun for self-defense is legal in every state, although the scores of mass shootings that have happened since 2008 bear the shame of our loose gun control laws. A 20 year-old man shot and killed 20 children and 6 adults. And inner-city violent crime is at the lowest it's been in 40 years.

What they predicted: Homeschooling would become heavily regulated, resulting in thousands of homeschooling parents leaving the U.S. for friendlier countries like Australia and New Zealand.

What happened: Homeschooling continues to grow in America, and you don't have to promise not to teach your kids about God.

Are you beginning to see a pattern? There is more in the letter itself, and some other energized soul can fact-check the rest of it if they see fit. Iran did not drop a nuclear bomb in Tel Aviv; the U.S. does not have single-payer healthcare, and the Justice Department did not file charges against all members of Bush's administration who had something to do with the Iraq War.

Focus on the Family headquarters | Image via Flickr by Bilerico Project (http://bit.ly/1Kg1fjs)

Focus on the Family began the letter paying lip service to the idea that Christians can disagree on politics, but ended it with the kind of bald partisanship that sat just under the surface all along: "Christians did not realize that by electing Barack Obama — rated the most liberal U.S. senator in 2007 —  they would allow the law, in the hands of a liberal Congress and Supreme Court, to become a great instrument of oppression."

This is where the religious right has begun to falter and splinter. It sees itself losing the power that came along with the Moral Majority, and that fall could be one of the best things yet to happen to American Christianity. Power was never what the Kingdom of God was about. But once you've been in power, you try to hold onto it--that's the nature of its corrupting influence. And some people will do anything, even resort to specious fear-mongering, to tighten their grip on the top rung of the ladder, forgetting that pride goes before a fall. That's what Focus on the Family did in 2008, and that's what Ted Cruz is doing right now, and that's why, short of a significant strategy shift, conservative evangelicals will slowly lose all the political power they once held.

Related Posts
By Bob Smietana, Alejandra Molina
Death of megachurch pastor Darrin Patrick officially ruled a suicide
By Alejandra Molina
Four young people of different faiths move into a home together, then a pandemic happens
By Jeffrey Salkin
Warning: Your piety might be dangerous to your health
By Thomas Reese
Democrats ignore Catholic voters at their own peril
By Elana Schor, Jack Jenkins
In South Carolina, secular activists rival political might of black church