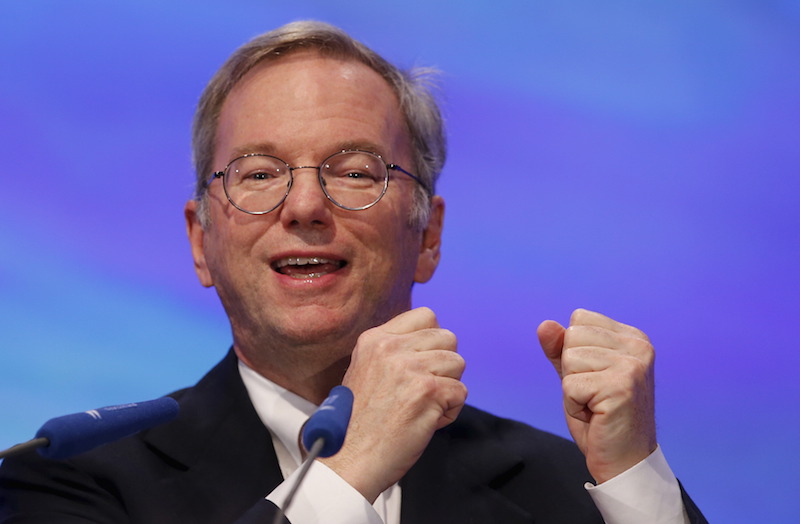 VATICAN CITY (RNS) Pope Francis is a confessed tech "dinosaur" who once said he doesn't know how to use anything with more than two buttons.

Eric Schmidt is famous as the longtime CEO of Google, the search engine company that has become synonymous with digital innovation.

The pair met in an unusual private audience at the Vatican on Friday (Jan. 15), though good luck finding out what happened: the Vatican said it would have no comment on the 15-minute meeting, and even the Internet wasn't much help.

On the other hand, the pope and the tech exec do have a number of overlapping interests that could have easily filled the time.

Schmidt, one of Silicon Valley’s most powerful and wealthy executives, in 2006 set up a family foundation dedicated to the sustainable use of energy and natural resources -- a cause dear to Francis, who last year published the first papal encyclical dedicated to the environment.

And Schmidt -- who is currently executive chairman at Alphabet Inc., Google’s parent company -- is fascinated by the future of humanity and has co-authored a book detailing how technology can shape that future in positive ways.

“The internet ... offers immense possibilities for encounter and solidarity," he said in 2014.

RELATED STORY: Pope warns against being ‘too attached to the computer’

A video report on the meeting by Rome Reports, a Catholic outlet, showed Francis and Schmidt, apparently at the end of their meeting, with Schmidt saying to the pontiff, "I want to work with you to make these points. ... We will make it happen."

It wasn't clear what Schmidt was referring to. Francis simply nodded and said, "Pray for me. Don't forget."

Schmidt was also accompanied by Jared Cohen, a former U.S. State Department official and head of Google Ideas, a think tank. Cohen asked Francis to write "a note of advice" to his 22-month-old daughter, Zelda, and the pope obliged.

For all his professed tech naivete, Francis is actually pretty successful on social media. He has been deemed the most influential world leader on Twitter, with over 26 million followers on his nine accounts in different languages.

A Twitter exec helped set up that feed for Pope Emeritus Benedict XVI, and Francis has continued to push the Vatican's use of digital media. Francis also has held video meetings with children around the world using Google Hangouts.

Friday's audience with Schmidt -- a "Google Hangout," as the popular church blogger Rocco Palmo quipped -- was also extraordinary, Palmo wrote, because he said pontiffs never give private audiences to business chiefs for fear of appearing to endorse their products.

But these two may have had bigger issues to discuss than the latest Google Doodle.