Can we talk? Chaplains are now offering Skype or phone counseling to the homebound.
June 8, 2015
Rosie Scammell 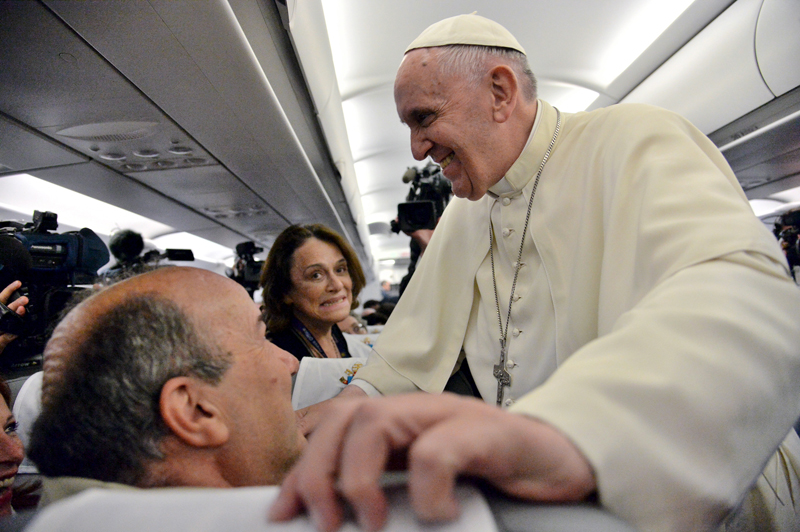 Pope Francis greets journalists on his flight back from Sarajevo, Bosnia-Herzegovina, to Rome on June 6, 2015. Photo courtesy of REUTERS/Luca Zennaro/Pool *Editors: This photo may only be republished with RNS-POPE-INTERNET, originally transmitted on June 8, 2015.

VATICAN CITY (RNS) Pope Francis has decried the “filth” of online pornography and warned people against wasting time on their computers.

Speaking aboard the papal plane after his visit on Saturday (June 6) to Bosnia-Herzegovina’s capital of Sarajevo, the pontiff took a two-pronged approach to modern technology.

“There are two different elements here: method and content,” he said, according to Vatican Radio. “Regarding the method or way of doing things, there is one that is bad for the soul, and that is being too attached to the computer.”

He went on to rail against online “filth” including pornography and “programs that are empty, devoid of values.”

He described consumerism and relativism as “a cancer of society.”

The pontiff himself rejects the idea of using the Internet or TV, which he said in May he hasn’t watched since 1990.

To stay informed he instead relies on the Italian newspaper La Repubblica, which he says he reads for no more than 10 minutes each day. A Swiss Guard tells him how his favorite soccer team, San Lorenzo, is doing back in his home city of Buenos Aires.

Despite the pontiff’s apparent resistance to technology, the Vatican has recently moved to become more active online and in multimedia.

Papal accounts on social media site Twitter now send out messages in nine languages, while an adviser to the Vatican in May said the Holy See should start providing more multimedia content.