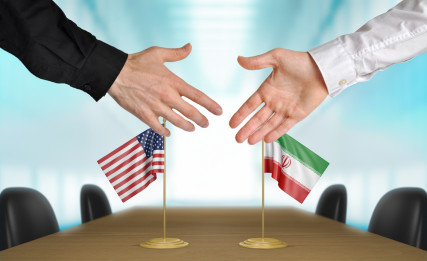 I wish that I was feeling better with the thawing of US-Iran relations.

True -- four Americans were released as part of the deal (Americans who should never have been captured and imprisoned in the first place, but I won't make a big deal about that if you won't).

But, not all American prisoners were released.

Not Robert Levinson -- an ex-CIA contractor and FBI agent, who has been a prisoner in Iran since 2007.

Some observers, like Jerusalem Post columnist Caroline Glick, suggested (in her Facebook posting) that: "President Obama screwed American Jewry by abandoning FBI officer Robert Levinson in Iran, sealing his death warrant and in so doing, made clear that Jews are second class citizens and not worthy of the same protection as all other Americans."

Caroline Glick, and her ideological homies, think that the Obama administration deliberately left Bob Levinson behind in Iran because he's Jewish. And, to be sure, this fits deliciously into the Obama-phobic narrative that many Jews have adapted.

Jews have turned suspicion into an aerobic sport. But this seems a bit off. It's not about Levinson's ethnicity. This is not a singular or deliberate blow against Jewish Americans, as tempting as it might be to think so.

In fact, President Obama said: “Iran has agreed to deepen our coordination as we work to locate Robert Levinson, missing from Iran for more than eight years...Even as we rejoice in the safe return of others we will never forget about Bob...We will never rest until their family is whole again.”

I'm actually more concerned about American Jewish organizations that are falling all over themselves lauding the breakthrough with Iran.

Consider a triumphant mailing from the Shalom Center. It actually had the poor taste to link Martin Luther King's birthday with the Iran deal:

Today –- as we celebrate the birthday of Dr. Martin Luther King –- we can also celebrate a victory for nonviolence and peacemaking not only in the past but in the present and future. or today we have just seen the agreement between Iran and the Great Powers led by the United States go into full effect, ending the danger of an Iranian nuclear weapon, ending the economic sanctions against Iran, and welcoming Iran back into the community of nations.

For today we have just seen the agreement between Iran and the Great Powers led by the United States go into full effect, ending the danger of an Iranian nuclear weapon, ending the economic sanctions against Iran, and welcoming Iran back into the community of nations.

Disconnect # 1: Martin Luther King, Jr., the champion of non-violence and civil rights, mentioned in the same breath as the mullahs of Iran. 'Nuff said.

Disconnect # 2: The Shalom Center fails to mention Iran's ongoing murderous rhetoric against the state of Israel. Because, apparently, that doesn't count.

Disconnect # 3: Again, the good news from the Shalom Center: "It [Iran] has released Americans it had unjustly imprisoned..."

Um, except for Robert Levinson.

But the Shalom Center is not alone.

Unless I have totally missed something, there have been no statements from American Jewish organizations about Bob Levinson's plight.

Or, for that matter, Christian churches.

Which can only remind us of Dr. King's famous bon mot: "In the end we will remember not the words of our enemies, but the silence of our friends."

Hillary Clinton got it right the other night, in her retort to Bernie Sanders' rhapsodic glee over the current state of US-Iran relations: "We've had one good day over 36 years."

Over the past nine years, Bob Levinson has had no good days.

This Sabbath, I am instituting a new prayer in my synagogue -- a prayer for the release of Bob Levinson. All synagogues and churches (and mosques?) should follow suit.

Indeed, to quote one of my favorite Bill Murray films -- #WhatAboutBob?

It is time -- way past time -- for Bob Levinson to come home.