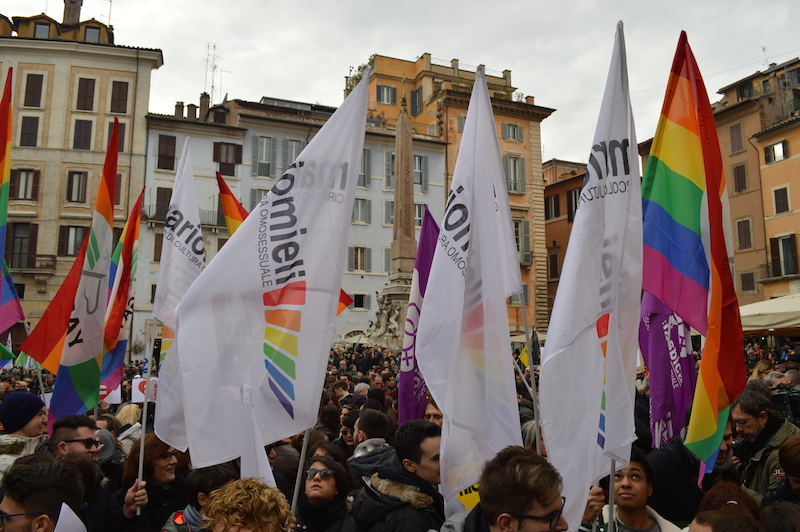 Protesters gather outside Rome’s Pantheon to call on politicians to grant legal rights to same-sex couples, ahead of a landmark vote scheduled for Jan. 28, 2016. Religion News Service photo by Rosie Scammell

ROME (RNS) Campaigners across Italy have held rallies calling for same-sex couples to be granted legal recognition and family rights, but they are facing tough opposition in the home of the Catholic Church.

Thousands of people descended on 100 city squares across Italy on Saturday (Jan. 23), brandishing alarm clocks and demanding lawmakers “wake up” to their demands. Solidarity rallies were also held in European capitals such as London and Berlin.

The nationwide protests were held ahead of a vote expected Thursday on whether to grant same-sex couples legal rights.

“We are at a crisis point in an Italy which must talk about civil rights,” said Fabrizio Marrazzo, spokesman for Rome’s Gay Center, calling for the same mass mobilization which saw abortion and divorce legalized in the 1970s.

The historic bill supported by Italy’s prime minister,, is intended to legalize same-sex partnerships and allow gay people to adopt their partner’s children.

But the proposals face strong opposition from the Catholic Church, which has traditionally had considerable influence over political decision-making.

Outside the Pantheon in central Rome, Lucia Caponera, vice president of the ArciLesbica organization, said religion must not sway the vote.

“The church does its work, civil society and the political (sphere) should take care of doing something else,”  Caponera said. “The piazzas are a symbol of a wait that can last no longer.”

But Cardinal Angelo Bagnasco, head of the Italian Bishops’ Conference has thrown his support behind the the “Family Day” movement, which will protest against the legislation on Jan. 30.

Pope Francis has not directly commented on the prime minister’s bill, but his remarks on Friday about the family have been interpreted as the pope taking a stance.

“The church has — amongst other things — indicated to the world that there cannot be confusion between the family wanted by God and every other type of union,” Francis said, referring to discussions at the recent synod on the family.

Despite such comments, hours earlier the pope met with the CEO of Apple, Tim Cook, who is openly gay, and Francis is generally viewed as having a more welcoming approach towards gay people than past pontiffs.

The pope has not, however, attempted to change church doctrine on the matter, which deems same-sex relationships “intrinsically disordered” and states gay people should be celibate.