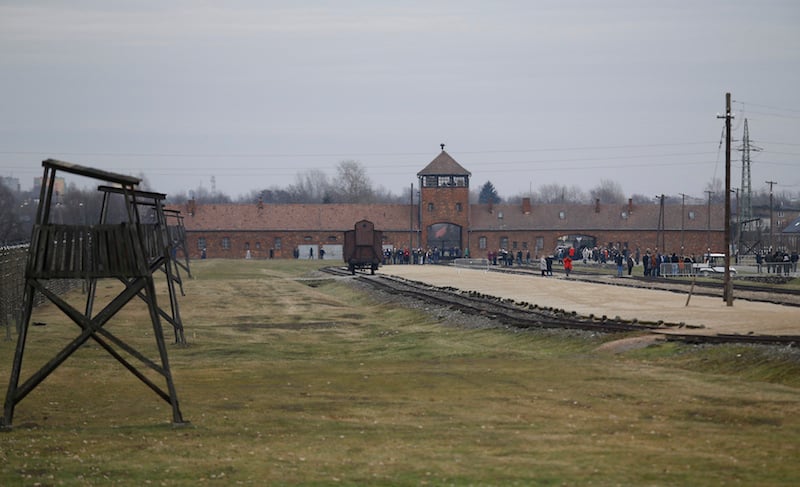 Visitors gather on the grounds of the former Nazi German concentration and extermination camp Auschwitz-Birkenau near Oswiecim, Poland January 27, 2016, to mark the 71st anniversary of the liberation of the camp by Soviet troops and to remember the victims of the Holocaust. Photo courtesy REUTERS/Kacper Pempel –

Wednesday (Jan. 27)  is International Holocaust Remembrance Day, the date the United Nations has chosen to commemorate victims of the Holocaust during World War II. Six million Jews were murdered by Germany’s Nazi regime, along with 5 million non-Jews who were killed.

The anniversary, marked each year since 2005, falls on the anniversary of the liberation of the Auschwitz-Birkenau death camp in Poland by the Russian army in 1945. One million people died there.

Here is how countries around the world are marking the 71st anniversary:

President Obama plans to attend an event at the Israeli Embassy in Washington, where two Americans and two Poles, all non-Jews, will be honored for their work trying to save Jews. The U.S. Holocaust Memorial Museum in Washington is holding two separate events, both of which will be streamed live on the museum’s website.

The Montreal Holocaust Memorial Center is offering visitors free admission to the museum, which focuses on Jewish communities before, during and after the Holocaust. A special emphasis is on the life stories of Montreal survivors.

The Friends of Yad Vashem and the city of Linz will hold a remembrance ceremony at Linz City Hall. Yad Vashem is Israel’s official memorial to Holocaust victimsin Jerusalem. Yad Vashem works to preserve the memories and names of murdered Jews.

A university (Autonome Hochschule) in Eupen will screen a documentary about Helmut Clahsen, who hid with his younger brother in dozens of locations in Germany and Belgium after his mother was persecuted by the Nazis in 1941. He died in Aachen, Germany, last October.

Prime Minster Manuel Valls will give an address at a commemoration event in Paris that is organized by UNESCO, the U.N. agency that promotes education, science and culture. UNESCO is hosting a number of public events and exhibitions in the French capital related to the theme of anti-Semitic propaganda and the Holocaust.

Members of the German government will join dignitaries at the German Parliament (Bundestag) in Berlin for a remembrance event that will focus on the topic of forced labor. Numerous cities and organizations across Germany will hold separate ceremonies. A state-funded cultural center in Bremen was forced to cancel an event that was critical of the Jewish state, the Jerusalem Post reported. The event was to be held Monday.

The Auschwitz-Birkenau Memorial and State Museum will host an event that will be streamed live on YouTube. It will be available in Polish and English. More than 1.7 million people visited the memorial in 2015, a record.