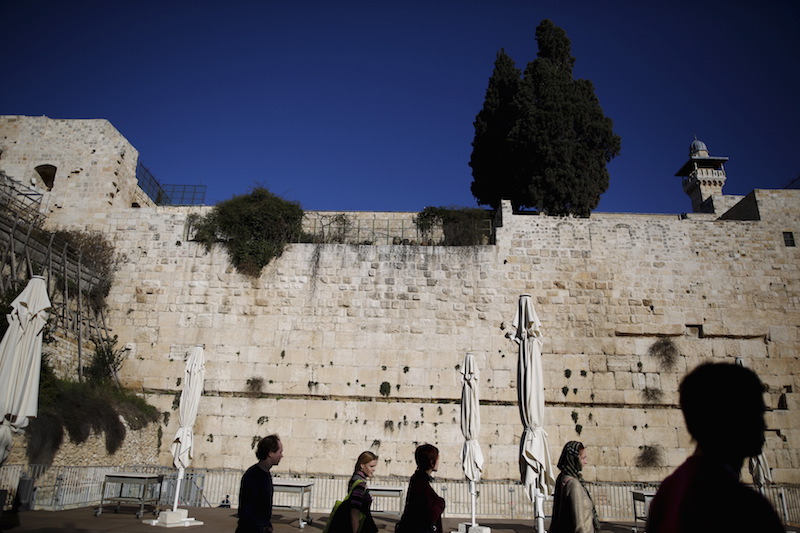 Tourists walk by part of the Western Wall, following the Israeli government’s approval to create a mixed-sex prayer plaza near Jerusalem’s Western Wall to accommodate Jews who contest Orthodox curbs on worship by women at the site, in Jerusalem’s Old City January 31, 2016. Photo courtesy REUTERS/Amir Cohen

JERUSALEM (Reuters) The Israeli government approved the creation of a mixed-gender plaza at Jerusalem’s Western Wall to accommodate Jews who contest Orthodox curbs on worship by women there.

The wall is revered as a vestige of Judaism’s two ancient temples and access to it is segregated by gender. Most religious rites take place in the men’s section in accordance with centuries-old Orthodox standards that hold sway in Israel.

The new area will be located at a separate expanse of the wall that, when seen from the plaza looking toward the wall, stands to the right of the current Orthodox-administered compound where men and women will still worship separately.

More liberal streams of Judaism, which outside of Israel have larger followings than Orthodoxy, chafe at the restriction. It is regularly challenged by the activist group “Women of the Wall”, sometimes setting off scuffles and police intervention.

Under the plan approved by Prime Minister Benjamin Netanyahu’s cabinet over objections from Orthodox members, an old archaeological site will be turned into a plaza where men and women can mix and pray freely.

In remarks broadcast before the 15-to-5 vote on Sunday (Jan. 31), Netanyahu said the plan sought a “solution to the question of the Women of the Wall” and “a compromise on this sensitive issue of a place that is meant to unite the Jewish people”.

Welcoming the blueprint, Women of the Wall activist Rabbi Susan Silverman told Reuters: “This is an extremely joyful day.”

Natan Sharansky, the head of the quasi-governmental Jewish Agency chosen by Netanyahu in 2013 to resolve the dispute, has said the new plaza would not entail structural damage to the nearby al Aqsa mosque, Islam’s third-holiest site.

The mosque compound, wall and several Christian shrines are in Jerusalem’s Old City, which Israel captured in the 1967 war and annexed as its capital in a move not recognised abroad.

An Israeli official said the new plaza will take at least a year to complete. Unlike the Western Wall, it will not have a state-employed rabbi, but will be run by a committee under Sharansky.

Plaza regulations will permit bar-mitzvah and bat-mitzvahs – Jewish coming-of-age ceremonies for boys and girls, respectively – to be held there.