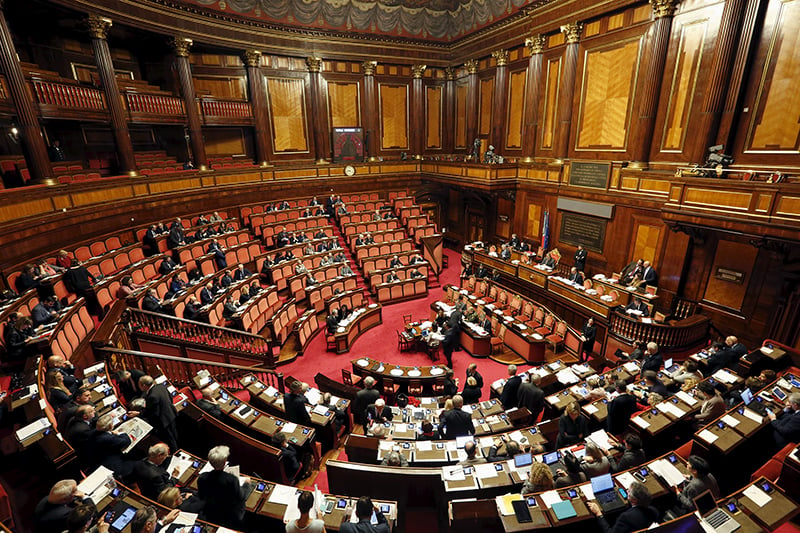 A general view shows the Italian Senate in Rome, January 28, 2016. Senate will begin debate on a bill that would legalise civil partnership for homosexuals as well as unmarried heterosexual couples. Photo courtesy of REUTERS/Remo Casilli
*Editors: This photo may only be republished with RNS-ITALY-GAY, originally transmitted on Feb. 2, 2016.

ROME (RNS) Italian senators have begun voting on a historic law to give legal rights to same-sex couples for the first time, a key test for the authority of the Vatican, which has for centuries had a powerful grip on Italian politics.

The political debate got underway late on Tuesday (Feb. 2), with senators voting to reject objections to the bill on constitutional grounds.

Under the proposed law, gay couples would be able to have their relationships recognized through civil partnerships. They would also be granted certain pension rights and, under a “stepchild adoption” clause, a gay person would be able to adopt his or her partner’s biological child. 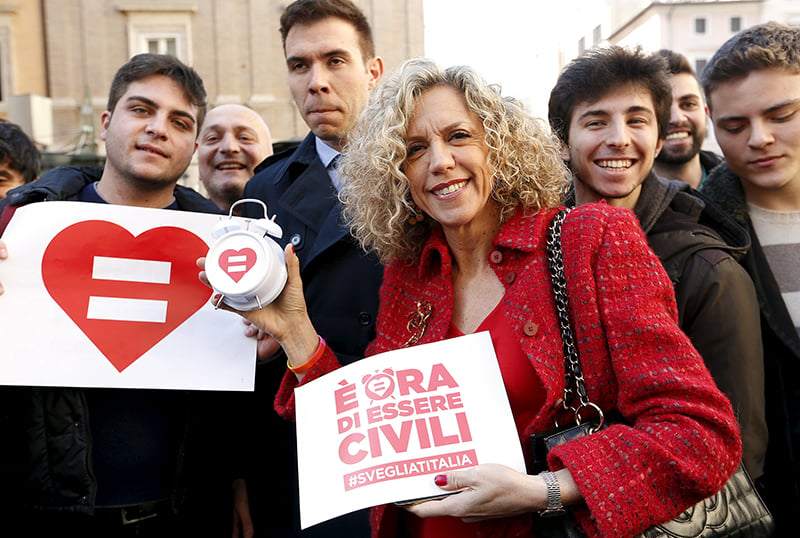 Democratic Party Senator Monica Cirinna holds a placard as she poses with supporters of gay civil unions outside the Italian Senate in Rome, on January 28, 2016. Senate will begin debate on a bill that would legalise civil partnership for homosexuals as well as unmarried heterosexual couples. The placard reads: ” It’s time to be civil”. Photo courtesy of REUTERS/Remo Casilli
*Editors: This photo may only be republished with RNS-ITALY-GAY, originally transmitted on Feb. 2, 2016.

After rounds of voting on each aspect of the bill, a final decision on whether to legalize same-sex unions is expected later this month. Intense debate is likely to continue.

Hundreds of thousands of Italians traveled to Rome on Saturday (Jan. 30) to take part in a “Family Day” protest, calling on the government to reject the bill. While organizers said the rally was not church-sponsored, there was a strong Catholic presence and numerous nuns and priests attended.

Protesters hoping for the full backing of Pope Francis were left disappointed, as the pontiff has so far refused to publicly comment on the law.

A recent remark by Francis has, however, been interpreted as opposition to the bill: “There cannot be confusion between the family wanted by God and every other type of union,” he said.

Some Catholics have also shown their support for gay rights, especially the pro-reform “Noi Siamo Chiesa” (“We Are Church”) group.

Overall, discussion of the bill has underscored the Vatican’s declining influence in Italian politics.

During the 1970s, the Catholic Church fought hard against — and ultimately lost — the legalization of divorce and abortion.

“Until the end of the 1960s and 1970s, it was very strong,” said Pietro Pustorino, an international human rights professor at Rome’s Luiss University, referring to church influence on Italian society. “(Then) there was a break, between Italian society and the church.”

Pustorino said the Holy See has adopted a softer approach with the proposed law.

“Traditionalists want to maintain their power in the Vatican. It’s not only conservatism for their values, but for power inside the church,” he said. “This pope may be more favorable (toward the law) than is said, but he can’t detach himself from the church. If he went completely against an important part of Vatican power, there would be a split.”

During his papacy, Francis has adopted a more welcoming approach toward gay and divorced Catholics and warned churchmen against pushing church teachings upon parishioners. But the pope has also disappointed some gay Catholics for not pushing for a change in church doctrine, which describes same-sex relationships as “intrinsically disordered.”

(Rosie Scammell is the Vatican correspondent for RNS)