(RNS) “You, Me and The Apocalypse,” now in its third week on NBC, follows a group of 15 people huddled together in a bunker as they count down the days until a life-ending comet smashes into Earth.

One of those is Sister Celine, a young, wide-eyed nun who, together with Father Jude Sutton (played by Rob Lowe), is tasked with investigating various end-times prophecies.

It is Italian actress Gaia Scodellaro’s first major television series, and she brings a poise and dynamism to the character as a religious woman who is both naive and wise, sweet yet assertive — a formidable challenge that Scodellaro makes look easy.

RNS recently caught up with Scodellaro by phone to talk to her about her new starring role. Asked if she considered herself a religious person, she said: “I consider myself very much a spiritual person.” 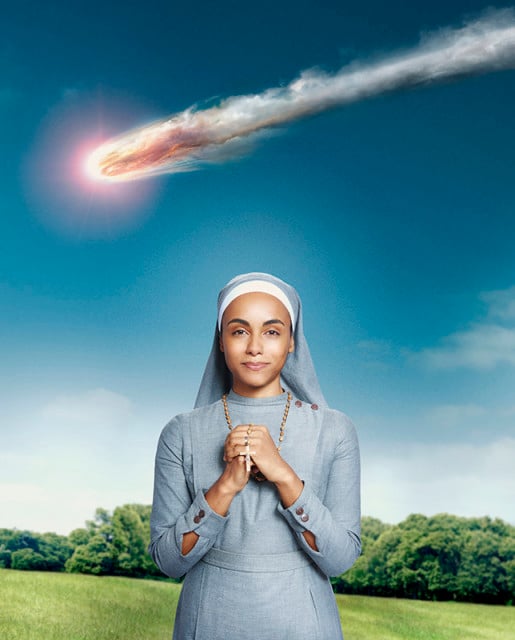 Gaia Scodellaro as Sister Celine Leonti in “You, Me and the Apocalypse.” Photo by Guy Levy/WTTV Productions Limited

Q: How did you end up connecting with “You, Me and The Apocalypse”?

A: I auditioned for YME just before Christmas 2014, and I got the call in January 2015, saying I got the role of Sister Celine. At that point, I didn’t know anything about the show. I didn’t know which actors were in it. But there was a fantastic description of Celine, so I prepared to the best of my ability. When I flew to London for the table reading, I met the entire cast at table reading. This is my biggest job to date.

Q: Did you do a lot of research on nuns when you took on the role?

A: I went to private school for most of my schooling, and I was surrounded by nuns in elementary school. I remember observing them, and that helped me find the mannerisms and posture. They really are truly humble, humble women … the fact that they live such simple, simple lives. They don’t need much.

Q: What did you find most surprising about playing a nun?

A: Wearing the habit and wimple was something that was challenging because you do feel confined and restricted, and that took a little getting used to. It’s a different feeling: You move differently, and hold yourself differently. That definitely helped me dive into this world of Sister Celine. Also, it’s interesting to not worry about how you look on camera.

Q: Sister Celine seems like a very sincere person. Does she stay that way throughout the series?

A: Just as everyone else is affected, she is too. It doesn’t at all change her personality — she’s very generous and kind, very nonjudgmental. Her faith is very strong. Of course, there are moments when her faith is questioned because she’s only lived in a convent. She hasn’t had the same experiences everyone else has had.  As we move along, she starts to want to understand about some of this for herself. Having lived such a sheltered way, traveling around with Father Jude researching the Antichrist creates an interesting and challenging and scary world for her. But when it comes down to it, she retains her wide-eyed, passionate (character). Rob Lowe as Father Jude Sutton and Gaia Scodellaro as Sister Celine Leonti in “You, Me and the Apocalypse.” Photo by Ed Miller/WTTV Productions Limited

Q: Speaking of Father Jude … it seems like he has a crush on your character!

A: Father Jude has never met anyone like Celine, so he’s probably curious. As we move along, as they find out more information, they become closer. They are sharing this impending apocalyptic ordeal together, and they share such a faith and understanding in wanting to find the truth. That’s something they have in common. When Celine meets Father Jude, he’s aggressive and she doesn’t really grasp that. But as things move forward, she understands him. His faith is strong as well. I don’t want to give too much away, though!

Q: So we know you made it to the bunker. That’s good, at least!

A: We see in the beginning of every episode the different characters that made it into the bunker. As far as shooting is concerned, we haven’t gotten that far, so I don’t know about her life in bunker. We know 15 people survive, and we found out Celine is there. The writers have kept everything from us!

“You, Me and The Apocalypse” airs Thursdays at 8 p.m. Eastern on NBC.