If history is our guide, the differences in the Republican Party between the "God" voters -- those backing Ted Cruz, at right -- and the "Country" voters -- who favor Donald Trump -- will not last long. Photo courtesy of REUTERS/Chris Keane
February 3, 2016
Cathy Lynn Grossman 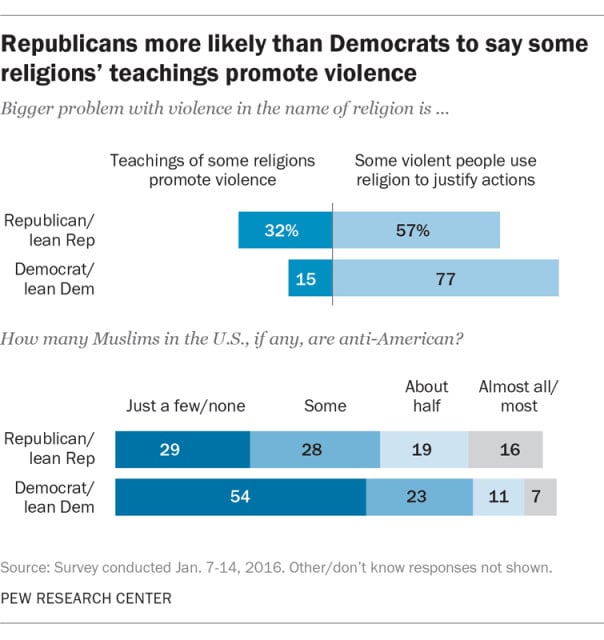 (RNS) Republicans and Democrats divide sharply over views on Islam, Muslims and how a U.S. president should label violent extremists.

But Americans overall agree there’s "a lot" of discrimination against Muslims living in the United States -- and it’s rising -- a new Pew Research survey finds.

The survey, of 2,009 U.S. adults, was conducted in January, a month after 14 people were killed in a San Bernardino, Calif., terrorism attack and Republican presidential candidate Donald Trump called for banning Muslims' entry to the United States.

“I’m struck by the finding that 25 percent of the public thinks at least half the Muslims in the U.S. are anti-American,” said Besheer Mohamed, a senior researcher at Pew and a co-author of the survey analysis, released Wednesday (Feb. 3).

The overall finding was the same for this question when it was asked in 2002, a year after the 9/11 terrorist attack.

Among Democrats and those who lean Democratic, 54 percent say “just a few or no” Muslims here are anti-American. Thirty-four percent say this is so for about half or some Muslims in the U.S., and 7 percent say it’s true for almost all Muslims living here.

It’s hard to know the reason behind the partisan realignment since 2002. But, Mohamed said, there are clues in responses to the survey question on how the public wants the next president to talk about “Islamic extremists” (the phrase Pew used in its questionnaire).

“We see a sharp partisan split on this,” he said.

Democrats and Republicans are almost mirror opposites on this.

“For Republicans, 65 percent want a blunt-talking president, even if that means the president is critical of Islam. Whereas, for Democrats, 70 percent say the next president should be careful not to criticize Islam as a whole,” said Mohamed.

Among Republican voters, most who favor blunt talk say Trump or his chief rival, Texas Sen. Cruz, would make "good" or "great" presidents. What is the bigger problem about violence in the name of religion? Graphic courtesy of Pew Research Center

According to the report, “Republicans are twice as likely as Democrats to say the main problem with violence committed in the name of religion is that some religions espouse violent teachings (though this is the minority view within both parties at 32 percent and 15 percent respectively).”

That finding echoes a December 2015 survey that found 46 percent of Americans think Islam is more likely than other religions to encourage violence.

Partisanship also shows up on whether Muslims living in the U.S. face “a lot” of discrimination: 74 percent of Democrats but only 42 percent of Republicans say this is so.

Even so, the parties unite on one point: 76 percent, including majorities in both parties, say “discrimination against Muslims is on the rise.”