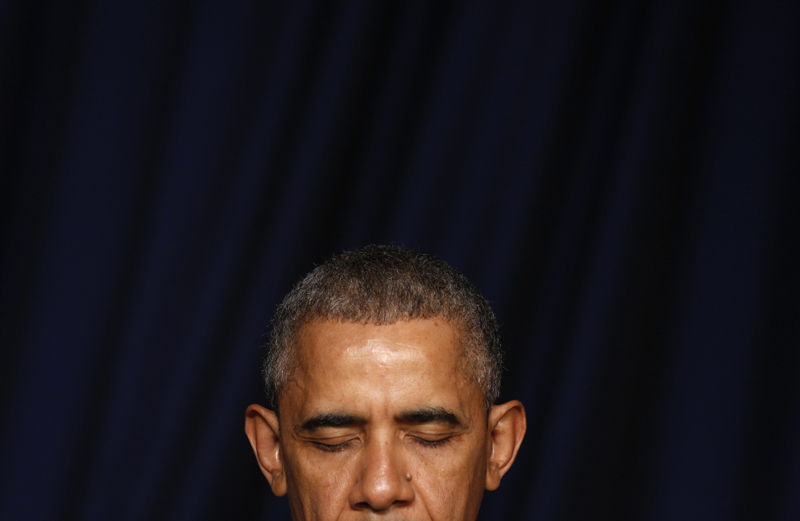 President Barack Obama bows his head in prayer as he attends the National Prayer Breakfast in Washington on Feb. 4, 2016. Photo courtesy of REUTERS/Kevin Lamarque
*Editors: This photo may only be republished with RNS-PRAYER-BREAKFAST, originally transmitted on Feb. 4, 2016.

WASHINGTON (RNS) In his last National Prayer Breakfast speech while in office, President Obama gave an introspective talk about how his faith overcomes his fears.

“For me, and I know for so many of you, faith is the great cure for fear,” Obama said at the Washington Hilton event Thursday (Feb. 4). “Jesus is a good cure for fear.”

Obama’s speech to several thousand mostly evangelical listeners came a day after he spoke at a Baltimore mosque and gave a history lesson on Muslim Americans’ contributions to the country.

The National Prayer Breakfast, held for the 64th time, is chaired each year by members of Congress who meet weekly for prayer when Congress is in session. It draws politicians, diplomats and prominent evangelical Christian leaders.

Speaking slowly at times as he talked about how he is comforted by Scripture and the faith of others, Obama said he has lately focused on a Bible verse from 2 Timothy: “For God has not given us a spirit of fear, but of power and of love and of a sound mind.”

He said now is the best period to have that scriptural assurance.

“What better time in these changing and tumultuous times to have Jesus standing beside us, steadying our minds, cleansing our hearts, pointing us towards what matters,” he said.

Hollywood power couple Roma Downey and Mark Burnett, the other keynote speakers at the breakfast, joined the president in urging that Americans bridge the divides that separate them.

“We pray that with God’s help our world can heal some of the hurts that wound us and the confusion that divides us, but it begins with us,” said Downey, whose husband kept his hand on her shoulder as they spoke as the first husband-and-wife team to ever address the breakfast.

“Perhaps a good place to start is to simply see the image of God in the eyes of everyone you meet.”

Obama gave credit to congregations of a variety of faiths for coming to the aid of others across the country and the globe.

Christians, Sikhs and others helped after an earthquake rocked Haiti, he said, and Jews, Christians and Muslims strove to save West Africans from Ebola. He credited people of faith for how they welcomed Syrian refugees to the U.S. with food and blankets and worked to “wrap a shattered community in love” after nine worshippers at Emanuel African Methodist Episcopal Church in Charleston, S.C., were killed.

Obama said he joins the continuing prayers for Christians and other people of faith around the world who are persecuted for their beliefs, and he expressed gratitude for the safe return of Iranian-American pastor Saeed Abedini, who was released in January from Iran after being imprisoned since 2012.

After acknowledging his prayers to be forgiven for his own failings, Obama closed his remarks with his prayers for the country and the future.

“I pray that we will see every single child as our own, each worthy of our love and of our compassion,” he said. “And I pray we answer Scripture’s call to lift up the vulnerable, and to stand up for justice, and ensure that every human being lives in dignity.”

Opinion
Why every Jewish kid goes on Birthright
Follow us on Facebook!
Submit your photos to RNS