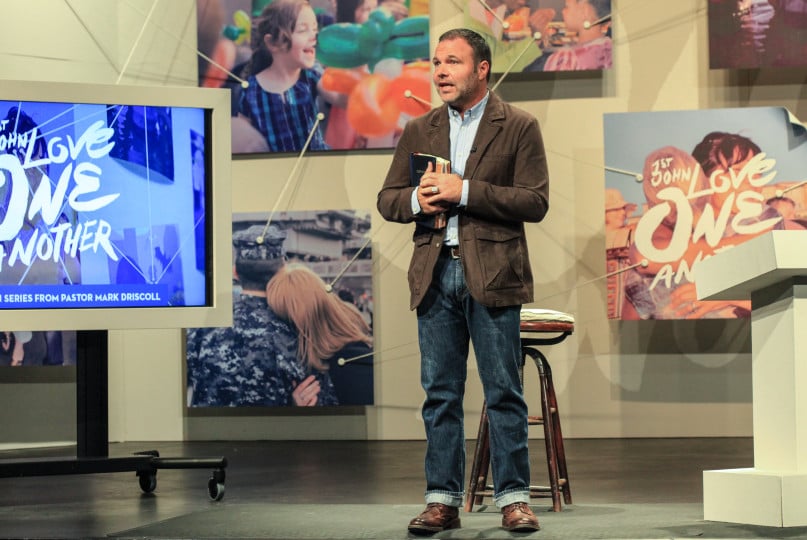 (RNS) While one self-involved, authoritarian, crude-talkin’ leader has been making headlines across the country, another one has quietly been coming up with plans to start his own church in Phoenix.

Mark Driscoll, pastor of Mars Hill Church in Seattle until he resigned in 2014, announced that he was setting up The Trinity Church there on Monday via his Twitter account. (Just before this announcement, he had observed on Twitter that “Real friends are like socks. You might lose them for a while but eventually they show back up.”)

The Trinity Church’s website features lovely images of the sun setting over the Arizona deserts while families play. You can sign up for their newsletter, read up on the staff and leadership, or watch a five-minute video in which Driscoll and his wife Grace discuss planting this new church, named after a church planted by Grace’s parents before she was born. Once you’ve done that, you can read the guidelines that give shape to The Trinity Church:

Supporting Driscoll in his new endeavor are two other former Mars Hill staffers, Andy Girton and Brandon Andersen. As The Seattle Times pointed out, none of the three men mention their time at Mars Hill in their bios — all of which refer to their experience working in churches — which is a curious omission, because it would be difficult to find an evangelical Christian in the demographic Trinity Church is targeting who had not heard of either Mark Driscoll or Mars Hill.

Driscoll has left a wake of destruction so severe that the entire network of churches he founded had to shutter its doors. He has never taken full responsibility for his abusive tactics, never apologized to many of the individuals who he wronged, and doesn’t appear to have absorbed much of a lesson at all from his failings. But he’s back again, like a whack-a-mole. This is what happens when church leaders don’t take responsibility for their actions, and don’t engage in the kind of counseling they need: They simply pop up somewhere new to wreak the same havoc in a different place.

It is possible that Driscoll has learned from his past mistakes, and that he moves to Phoenix a wiser man. But a slight increase in wisdom isn’t all that is required of him, and he certainly hasn’t shown enough to bow out of church leadership altogether. He should find a new job for a while; one that doesn’t involve leading anyone or taking a paycheck from a church. His family needs to heal. His community needs to heal. Real wisdom in this scenario would involve humility, a total accounting of mistakes and responsibility, repentance, and a lot of unglamorous work. I don’t think he’s ready for that. Sadly, neither is Phoenix.

(Laura Turner is a columnist for RNS)