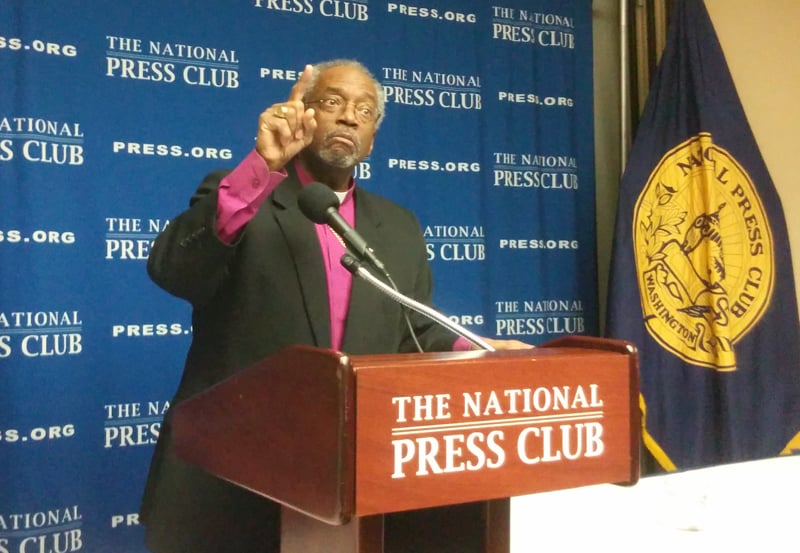 WASHINGTON (RNS) Episcopal Church Presiding Bishop Michael Curry is describing the recent censure of his church over allowing clergy to perform same-sex marriages as a “fair” move by the wider Anglican Communion.

Anglican primates voted last month in Canterbury, England, to remove the Episcopal Church from votes on doctrine and to ban it from representing the communion in ambassadorial relationships for three years.

In an appearance at the National Press Club on Monday (Feb. 8), Curry said the decision was a “very specific, almost surgical approach” that allowed both sides to express their differences and yet find a way to remain together.

“There was clarity on our part, both about who we are as a church and about our love and commitment to the communion and there was clarity on their part that they disagreed with us,” he said. “But they didn’t vote us off the island.”

The presiding bishop said he could understand why the majority of Anglican leaders voted for the censure.

“Because we differ on the core doctrine, it would not be seen as appropriate for us to represent the Anglican Communion in ecumenical, interfaith leadership,” he said. “That’s fair.”

He called the action a voicing of displeasure on the part of many Anglicans but one “that didn’t go too far.”

Curry was elected presiding bishop of the Episcopal Church in July, at the same meeting in which his church voted to permit clergy to perform same-sex marriages — a move that differs with the majority of Anglican Communion provinces.

The Episcopal Church, with about 1.8 million U.S. members, is one of 38 provinces in the worldwide Anglican Communion, which claims upwards of 85 million members globally.

“We believe in it (same-sex marriage) because the outstretched arms of Jesus on the cross really are about embracing and welcoming us all,” he said, adding that the Episcopal position would not be reviewed to avoid a renewal of the three-year censure. “We’re not changing.”

Curry was also asked about St. George’s School, an elite Episcopal prep school in Rhode Island that is under investigation for the alleged sexual abuse of dozens of former students.

“It’s being adjudicated actually on the local levels following the national canon and with our support,” he said.

He said the denomination has worked since the 1990s so that any allegations of sexual abuse are investigated, “not just kind of taken care of and swept under the rug.”