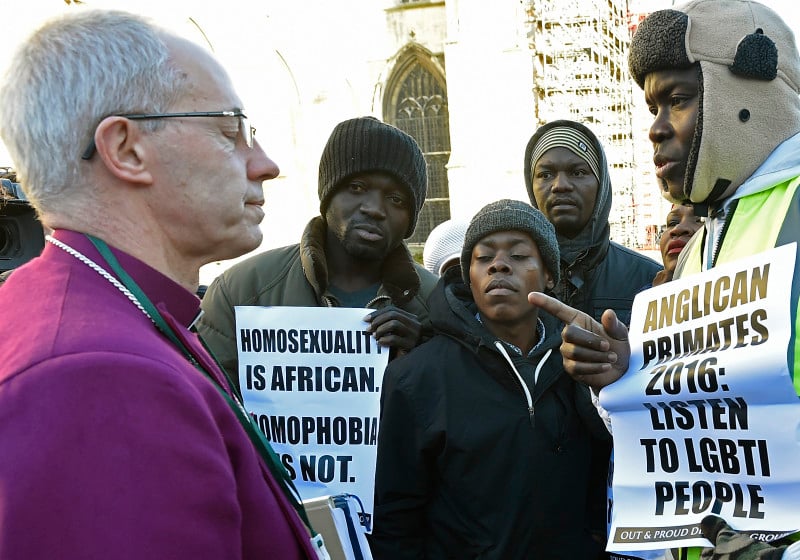 Archbishop of Canterbury Justin Welby, left, speaks with protesters on the grounds of Canterbury Cathedral in Canterbury, England, on Jan. 15, 2016. REUTERS/Toby Melville.

CANTERBURY, England (RNS) The Anglican Communion’s worldwide leaders, finishing up four days of heated discussions, sought to project a sense of unity despite a move to exclude the Episcopal Church from key policy decisions as a result of the American province’s acceptance of same-sex marriage.

Archbishop of Canterbury Justin Welby, overall leader of the global body, stressed at a news conference on Friday (Jan. 15) that the church had chosen to remain together, albeit effectively as a house divided.

“The decision that we would walk together was unanimous,” Welby said, adding that any meeting of leaders of a church of 85 million members in 165 countries and 38 provinces “is bound to give confused messages.”

The Anglican Communion is the world’s third-largest Christian denomination, after Catholics and Orthodox.

Welby played down the decision, leaked a day earlier, to suspend the Episcopal Church from decision-making on policy and governance for a period of three years. He said it had been “completely taken out of context, and then very heavily interpreted” as a sanction on the American province.

“We don’t have the power to sanction anyone,” he said. “We’ve said simply, that if any province on a major issue of how the church is run is out of line, there will be consequences in their full participation in the Anglican Communion.”

“It’s not a sanction; it’s a consequence,” he stressed.

Welby said he wanted to “take this opportunity personally to say how sorry I am for the pain the church has caused,” to people who have suffered because of their sexuality. But he stressed the primary fear for the majority of Anglicans around the world “is the violence that confronts them and their families daily” amid armed conflicts and militant extremism.

RELATED STORY: The ‘Splainer: Can the Anglican-Episcopalian marriage be saved?

Welby was flanked by several clerics from member churches, including Bishop Josiah Idowu-Fearon, the secretary general of the Anglican Communion. Idowu-Fearon said Western churches should stay out of African moral debates.

“If the West would just leave Africans within our various cultures, we know how to live together with our differences,” he said, adding that Anglican churches in Africa have “always made room for pastoral care and concern for those who have a different sexual orientation.” 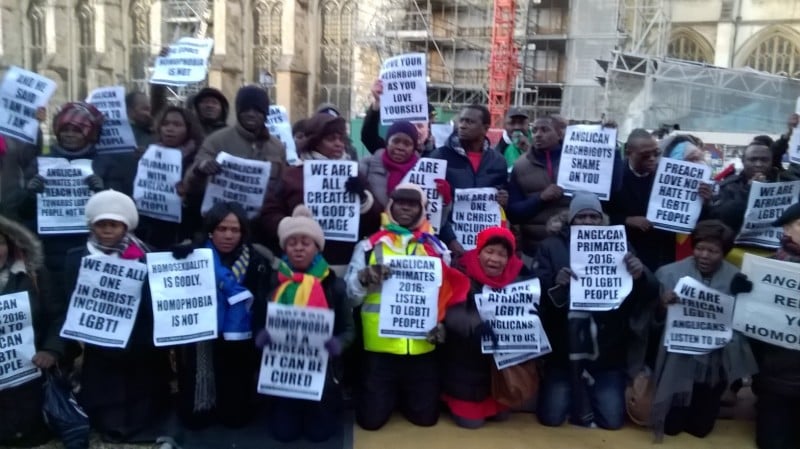 Protesters outside a conference of Anglican leaders in Canterbury, England on Jan. 15, 2015. Photo by RNS/Trevor Grundy.

There were protests by gay Anglicans outside Canterbury Cathedral, headquarters of the denomination. Many were African, who sang songs of protests and chanted slogans calling for an end to homophobia and gay bashing,

A Nigerian who gave only his first name, Chijioke, said religious leaders on the continent should be focusing on issues such as bad government and poverty rather than obsessing about issues of sexual orientation.

“We have been made to feel that we are nobody. That is not what the Church should do. God created all of us,” he told Reuters just outside the cathedral.

In a video statement from Canterbury, the Episcopal Church’s primate, Michael Curry, conceded that the decision was “not the outcome we had expected.”

“There will be heartache and pain for many,” he said, “but it’s important to remember that we are still part of the Anglican Communion, we are the Episcopal Church, and we are part of the Jesus movement, and that movement goes on.”

Speaking on the BBC’s Radio Four, Bishop of Buckingham Alan Wilson expressed regret at the sidelining of LGBT Christians.

Wilson was one of the 107 senior Anglican leaders who last week, sent a letter to Welby urging Anglicans to repent for the way gay people have been treated by the church.

He said the message was: “Please remember the people in the middle of this. Not the ecclesiastical politicians, not the bishops in Canterbury Cathedral but the LGBT people all over the world who experience discrimination, who experience injustice, hatred and violence.”

Details of the suspension were first reported by Anglican Ink, a Connecticut-based publication that said they came from a leaked communique. The vote passed by a two-thirds margin, the publication said, and included prominent voices among African bishops who have loudly condemned the American church for its liberal stance on gays.

The dramatic demotion follows a string of Episcopal Church decisions stretching back to 2003, when it elected Gene Robinson, an openly gay man, as a bishop of New Hampshire. That decision led dozens of U.S. churches to break away from the Episcopal Church and declare their allegiance to a series of rival groups, including the Anglican Church in North America.

In July, the Episcopal Church voted to allow its clergy to perform same-sex marriages, a move not taken by the majority of churches in the Anglican Communion.

“Given the seriousness of these matters we formally acknowledge this distance by requiring that for a period of three years The Episcopal Church no longer represent us on ecumenical and interfaith bodies,” a statement issued by the Anglican Communion reads. “They will not take part in decision making on any issues pertaining to doctrine or polity.” 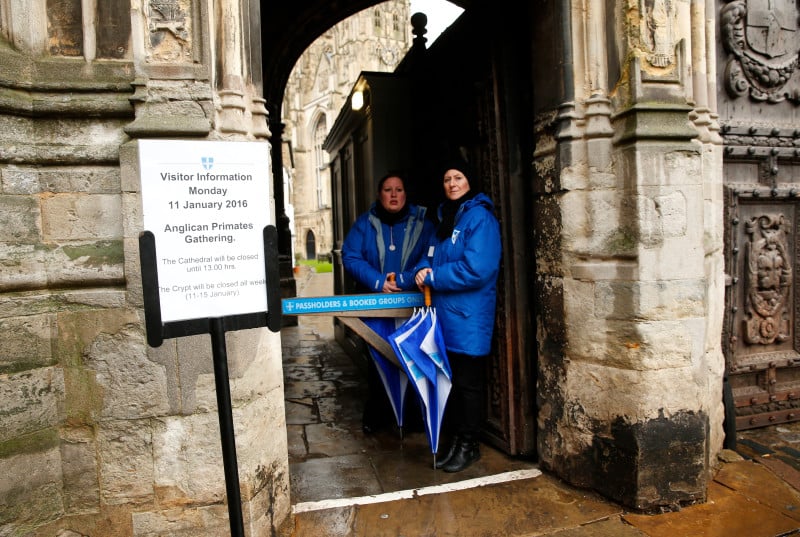 Two guides stand behind tape at Canterbury Cathedral, which was closed due to the Primates’ Meeting of the Anglican Church, in Canterbury, England, on, Jan. 11, 2016. REUTERS/Eddie Keogh.

The Episcopal Church, the predominant church of many of the 13 original colonies, has had a disproportionate influence on public life in the United States. Its influence still far surpasses its 1.8 million U.S. members, who now find themselves without a voice in Anglican Communion decisions.

The three-year term of the suspension is the amount of time until the next denominationwide meeting of the Episcopal Church, when it will vote on a response, though other church groups could respond sooner.

The suspension comes after four days of discussions among church leaders — “primates,” in church parlance — over the Episcopal Church’s position on gay marriage in relation to the position of the broader Anglican Communion.

The meetings apparently got testy; church media in Britain reported that the archbishop of Uganda, among the most conservative churches in Anglicanism, walked out amid disagreements.

Bishop Ian Douglas of the Episcopal Church in Connecticut wondered whether the Anglican primates wanted the Episcopal Church to repent for its position on same-sex marriage. “Or were they asking for an apology for how the (church’s governing body) went about opening all the roles and rites of the church, including marriage, to lesbian, gay, bisexual and transgender Episcopalians?”

Kevin Eckstrom, chief communications officer for Washington National Cathedral, the seat of the newly installed presiding Episcopal bishop, said that while this suspension will be greeted by sadness in the Episcopal Church, it has been on a parallel track with the Anglican Communion for a while.

“It is not unlike a couple who are having marital problems and are sleeping in separate bedrooms,” he said. “Maybe now they are going to formalize the separation.”

Curry told Episcopal News Service the sanction would be painful for many in the Episcopal Church to receive. “Many of us have committed ourselves and our church to being ‘a house of prayer for all people,’ as the Bible says, when all are truly welcome,” Curry said.

Communion leaders also reportedly wanted to censure the Anglican Church of Canada, but because it has not yet adopted same-sex marriage rites, no action was taken.

Welby announced that the primates had agreed to hold the next Lambeth Conference in 2020 The last was held in 2008. Gay issues dominated that gathering when Rowan Williams was Archbishop of Canterbury.