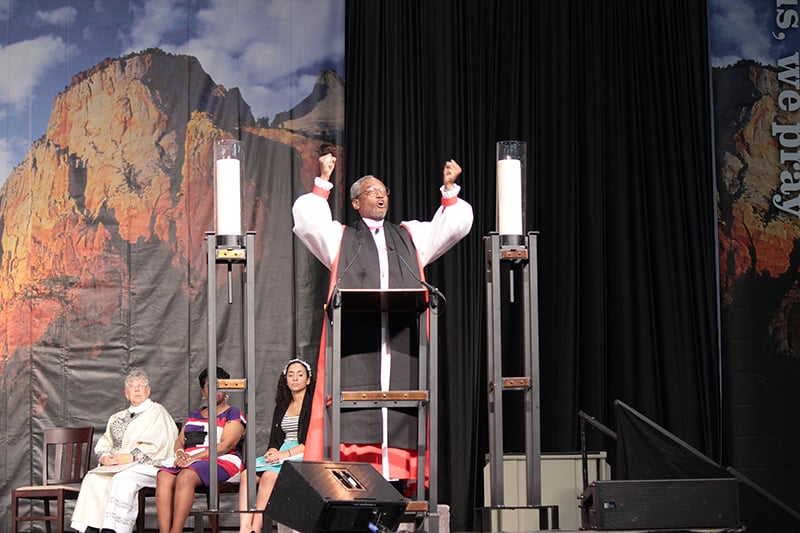 Bishop Michael Curry preaches at the 78th General Convention of the Episcopal Church in July 2015. Photo courtesy of Episcopal Diocese of North Carolina
*Editors: This photo may only be republished with RNS-CURRY-QANDA, originally transmitted on Oct. 28, 2015.

(RNS) Episcopal Bishop Michael Curry, the son of an Episcopal priest and grandson of a Baptist preacher, will be installed as presiding bishop of the Episcopal Church on Sunday (Nov. 1) at Washington National Cathedral. Curry, 62, has been the leader of the Diocese of North Carolina for 15 years. He spoke with Religion News Service about being the first African-American to lead the denomination and his plans to focus on evangelism and inclusion.

Q: Members of the Union of Black Episcopalians are calling your election their “Obama moment” and others have compared you to Pope Francis. How are you dealing with those comparisons?

A: I hope the pope and the president aren’t too embarrassed by the comparison. I think what is going on for all of us is a deep hope that we as the Episcopal Church can make an impact in the world in some significant way, even more than we have, so that the world we all live in can be a different place. I think the election of President Obama and, frankly, the elevation of a pope like Pope Francis are signs that the world doesn’t have to be the way it is, that it can actually change and that our faith can help to lead us to be a part of that change. 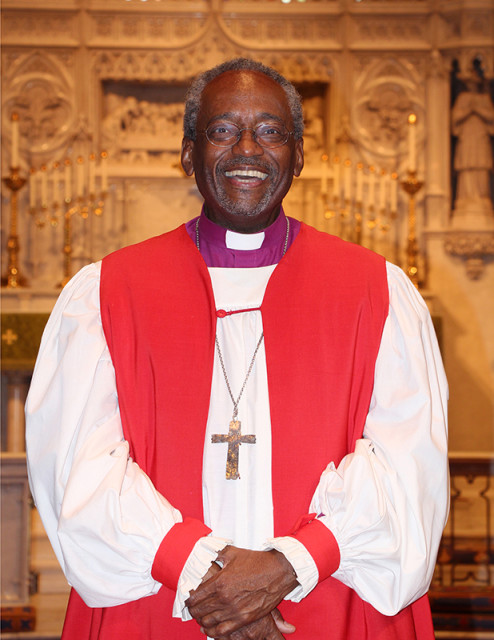 Michael Bruce Curry was elected and confirmed as the 27th presiding bishop of the Episcopal Church at the 78th General Convention in Salt Lake City on June 27, 2015. Photo courtesy of Summerlee Walter/Episcopal Diocese of North Carolina

Q: What do you see as your primary tasks ahead?

A: I think first to inspire and encourage the church and all of us as part of the church to embrace our vocation as part of the Jesus movement in the world. If 2 million Episcopalians are going out and functioning in this world as people who are actually following the teachings of Jesus and living in his spirit, in his way, they’re going to change some things.

Q: What was the second priority at the General Convention?

A: The second was to embrace serious work of racial reconciliation, which is the beginning of the work of reconciliation between human beings across all the divides. That work is the work of finding ways for people to come together to really create and be what Dr. (Martin Luther) King called the “beloved community.” That’s not just some utopian ideal. That, frankly, is the difference between life and death for the world. The choice is ours: chaos or community.

Q: In what ways do you see yourself continuing the work of your predecessor, Presiding Bishop Katharine Jefferts Schori?

A: She has led this church and has led us as bishops in ways that are genuinely collaborative but also in ways that have called us to the kind of spiritual maturity where we can be honest with each other, where we can engage our differences and where we can work toward solutions and resolutions that actually can work for us all.

I would hope to continue that good work and kind of build on what she has done.

Q: How will you be different from her?

A: Our diet. I’m a carnivore. She’s not. She’s very, very good about her diet. I eat anything.

Q: You emphasize that both evangelism and social justice are really important. Is there any way to say which one is more important to you?

Q: You are known for your preaching that includes elements of the style of the black church. How does that fit in the Episcopal Church, which people might think of as being kind of staid?

A: The Episcopal Church, which is part of the Anglican world, this is the same church that gave the world Desmond Tutu, and so we’re quite a diverse group.

I think one of the beautiful things about our church — and that I hope will be more true — is that it really is in fact a church of many voices. And all those voices come together around that shared vision of a world transformed by the love of God. 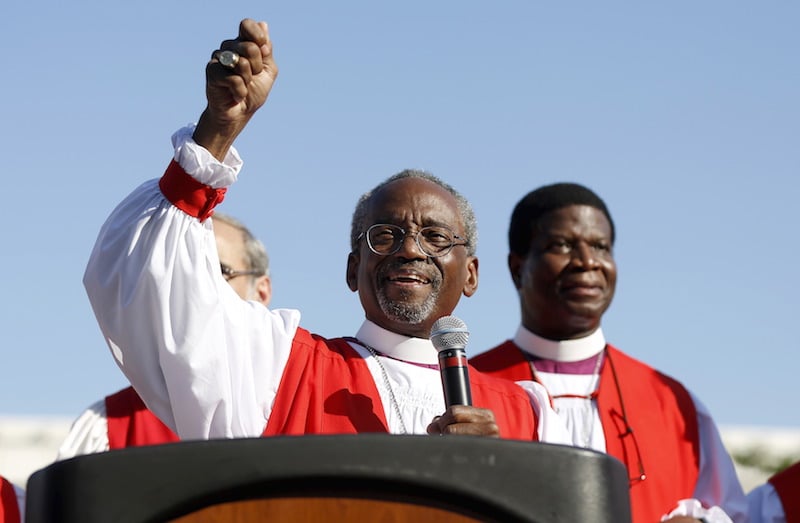 Bishop Michael Curry led marchers through the streets to protest against gun violence as part of the Episcopal Church convention in Salt Lake City on June 28, 2015. Curry was elected as the first African-American presiding bishop during the General Convention of the Episcopal Church, which is held every three years in different cities around the country. Photo courtesy of REUTERS/Jim Urquhart
*Editors: This photo may only be republished with RNS-RUSSELL-COLUMN, originally transmitted on July 2, 2015 and RNS-CURRY-Q&A, originally transmitted on Oct. 28, 2015.

Q: You have been supportive of LGBT rights and same-sex marriage. How will you reach those in your denomination and the worldwide Anglican Communion who differ from you about these issues?

A: As a bishop here in North Carolina, I have worked hard to make sure that in this church there is, as the old slaves used to say, “plenty good room, plenty good room in my Father’s kingdom.” And there will always be room and not just room — a real place for all of us. As presiding bishop I’ll continue to do the same thing. I will continue to reach out in faith and goodwill.

I really do believe that when Jesus said “go make disciples of all nations,” “all” really meant all. That means traditionalists and progressives.

Q: Do you foresee any possibility of winning back any of the U.S. churches that have split off from the Episcopal Church, especially over this issue of LGBT rights?

A: I wouldn’t say “winning back” would be a way to phrase it. I think in the great scheme of the love of God we can’t even dream of what is possible. I’m willing to plant myself on the side of the love of God and my experience in life is that when you do that, you‘re trusting in God to find a way that you might not even be able to envision.