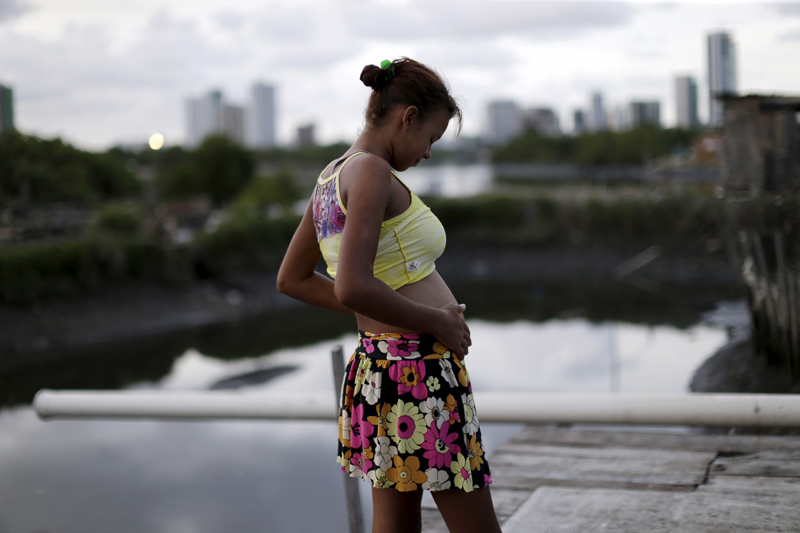 Eritania Maria, who is six months pregnant, is seen in front of her house at a slum in Recife, Brazil, on February 2, 2016. The Zika outbreak has revived the debate about easing abortion laws but Maria’s case highlights a gap between campaigners and U.N. officials calling for change and Brazil’s poor, who are worst affected by the mosquito-borne virus yet tend to be anti-abortion. Photo courtesy of REUTERS/Ueslei Marcelino
*Editors: This photo may only be republished with RNS-KNOLL-COMMENTARY, originally transmitted on Feb. 11, 2016.

(RNS) The discovery of a sexually transmitted case of the Zika virus is already reverberating in Latin America. In Brazil, at ground zero of the Zika virus outbreak, the Health Ministry issued new guidelines for pregnant Brazilians, including cautions to use condoms and abstain from sex or even kissing.

Activists are also weighing in, calling for legalizing abortion of deformed fetuses. But an important voice with the potential to influence the debate has said relatively little on the topic thus far: the Catholic Church.

The Zika virus is particularly terrifying to pregnant women. Some women exposed to the virus during pregnancy have given birth to babies with abnormally small brains. As a result, some activists have called for expanding legal abortions in Brazil to include deformed fetuses. The Brazilian Catholic Church has roundly rejected that proposal.

Meanwhile, contraception has received far less attention thus far. Yet in this arena, there may be room for compromise.

Brazil’s population is 65 percent Catholic, and the church is still a culturally relevant force in Brazilian politics. Catholic teachings and the growing role of evangelicals may help explain Brazilians’ extremely strong views on abortion: 79 percent oppose it, according to a 2014 Ibope Institute poll.

Abortion rights proponents hope the Zika crisis will highlight what they see as Brazil’s economically unjust reproductive regime. As Brazilian law professor Debora Diniz writes in The New York Times, “Low-paid women and domestic workers are the true face of the Zika virus.”

Diniz’s institute, ANIS, which is pushing the country’s Supreme Court to allow women infected with the Zika virus access to abortion, has a tough fight with religious authorities ahead.

While the Brazilian Catholic Church is known for strong support of health care initiatives and for helping Brazil’s poor, it sees no connection between poverty and abortion rights. Just last week, the National Conference of Brazilian Bishops released a statement condemning ANIS’ efforts as “an utter disrespect for the gift of life.”

But contraception is another matter, and on this count, the church might surprise its critics.

Cardinal Odilo Scherer of São Paulo last week called the use of condoms a “personal choice” and distinguished their use from abortion because it “does not involve a formed life.”

While Scherer’s comments may surprise some observers, other regional bishops have taken similar approaches.

The Mexican bishops in 1972 recognized that Catholics’ consciences might call for “responsible parenthood,” or sensitivity to the impact of having children on an existing family. The bishops also acknowledged “a very real and excruciating emergency for most Mexican families — the population explosion” that held back women from equal rights. In the context of the Mexican government’s population control measures, this letter amounted to a limited endorsement of contraception.

“Humanae Vitae” sheds some light on the subtleties of the Vatican’s position on birth control. An ostensibly traditional document, it nevertheless recommends “responsible” birth regulation “for serious reasons (economic and personal, and medical reasons).”

A Catholic theologian respected by conservatives has also acknowledged the moral value of using condoms to prevent spread of disease. Pope Emeritus Benedict XVI said in a book-length interview that the use of condoms by prostitutes to prevent AIDS infection constitutes “a first step in a movement toward a different way, a more human way, of living sexuality.”

He warned, though, that condom use could not solve health problems without a deeper reckoning with a promiscuous culture. 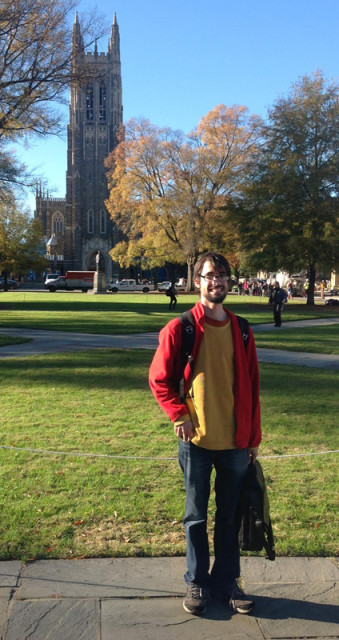 Travis Knoll is a doctoral student in history at Duke University in Durham, N.C. Photo courtesy of Travis Knoll

Brazilian Catholics seem to understand this distinction. Despite their opposition to abortion, 71 percent of Catholics support contraception generally, according to a 2005 IBOPE study. Ninety-four percent support condoms as a way to prevent disease.

Reproductive rights advocates are unlikely to win fervent Protestants and Catholics over on the issue of abortion. But as history shows, local churches, and even thoughtful traditional theologians, can see areas of gray.

The church might be more flexible on the issue of contraception if it sees it less as a cultural poison pill leading down the slope to abortion and more as a viable public health alternative. Likewise, reproductive rights groups’ might focus on contraception, protection and possibly even abstinence — all of which might make abortion less necessary.

Scherer’s statements and the Brazilian consensus for contraception suggest there is room for dialogue and compromise. As the epidemic continues to spread, putting the health of future generations at risk, the stakes are high indeed.

Church leaders and public health advocates should use this crisis as an opportunity to move beyond polarization about reproductive rights and search for common ground on birth control.

(Travis Knoll is a doctoral student in history at Duke University in Durham, N.C.)