CANTERBURY, England (RNS) Christians should regard blood and organ donations as their Christian duty, says a motion before the General Synod, the governing body of the Church of England.

The synod is set to consider a proposal to define organ donation as central to Christian giving. 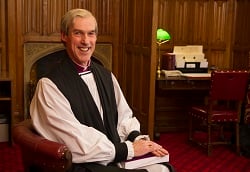 Bishop James Newcome. Photo courtesy of the Diocese of Carlisle

The motion cites the bishop of Carlisle, James Newcome, who told delegates to the three-day meeting: “We believe that everything we have, including our bodies, and our possessions, comes from God, and following in the footsteps of Jesus we are called to make a sacrificial offering of what already belongs to him for the benefit of others.”

That sacrificial offering, he added, may include time and treasure. But it applies “just as much to the blood that flows in our veins and the organs that are such an intrinsic part of our bodies.”

Newcome explained that Christians and their families need reassurance that there are no theological problems with giving blood or tissue before or after death.

Some religious groups, particularly Jehovah’s Witnesses, believe it is wrong to give blood or organs.

In 2014-15, there was a 3 percent drop in the number of organ donors across Britain for the first time in 11 years.

A report from England’s National Health Service Blood and Transplant warned that people waiting for transplants would continue to die unless there was a revolution in people’s attitudes.

The NHS estimates that 1,200 people missed out on potentially lifesaving transplants in 2010 because families did not accept their loved one’s wishes.