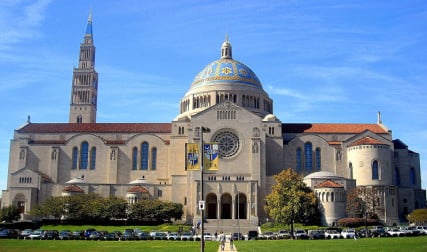 The Basilica of the National Shrine of the Immaculate Conception

(RNS) The funeral Mass for Supreme Court Justice Antonin Scalia will take place Saturday (Feb. 20) in the largest and one of the grandest Catholic churches in North America — the Basilica of the National Shrine of the Immaculate Conception.

The day before the funeral, Scalia’s body will lie in repose at the Supreme Court, where, following tradition, his chair and bench at the court have been draped in black wool crepe.

President Obama and first lady Michelle Obama will pay their respects Friday at the Supreme Court, but will not attend Saturday’s funeral. Vice President Joe Biden, a Catholic, will attend the funeral, said a White House spokesman.

NPR first reported the funeral site for Scalia, 79, who was found dead at a Texas ranch Saturday, ending a nearly 30-year career on the Supreme Court. He had gone to the ranch to hunt with friends.

Though details of the funeral have yet to be released, the justice, who regularly attended a Virginia church because he preferred its Latin Mass, is likely to have a very traditional Catholic funeral at the Romanesque-Byzantine basilica, which sits next to the campus of the Catholic University of America.

Pope Francis celebrated Mass at the basilica during his visit to the U.S. in September.

Typically in Catholic funerals, the casket is greeted at the door, and a white pall — a sheet of fabric about 6 by 10 feet long — is put over the casket, symbolizing the deceased’s baptismal garment, said the Rev. Thomas Reese, a Catholic priest and senior analyst at the National Catholic Reporter. The casket is then carried to the foot of the sanctuary, and the Mass proceeds as usual, though special prayers are said over the body.

“The preacher is supposed to preach a homily based on the Scripture readings,” and eulogies come after the Mass, Reese said.

It is also possible that Scalia’s son Paul Scalia, a Roman Catholic priest, could be the celebrant.