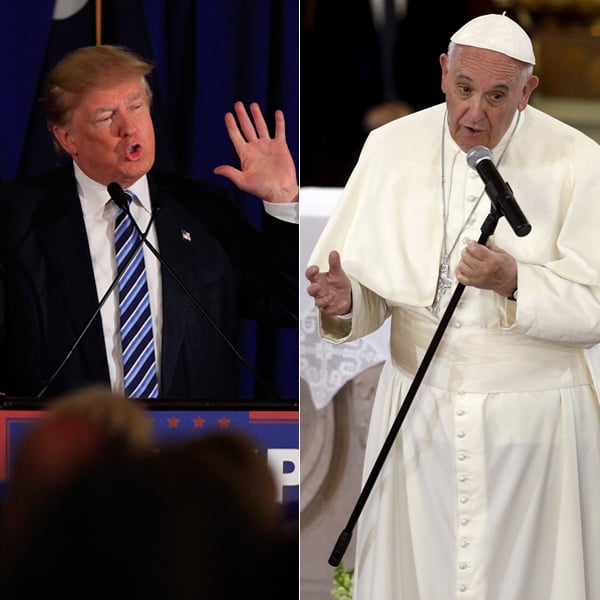 MYRTLE BEACH, S.C. (Reuters) – The Vatican is trying to tamp down a firestorm ignited by Pope Francis’ comments assailing Donald Trump’s views on U.S. immigration as “not Christian.”

A Vatican spokesman, on Friday (Feb 20) assured the Republican presidential front-runner that it was not a personal attack or attempt to influence the U.S. campaign.

And Trump, outraged when he first heard of the remarks early Thursday, later dialed back his forceful response and called the pope “a wonderful guy.”

Francis told reporters during a conversation on his flight home from Mexico on Thursday, “A person who thinks only about building walls, wherever they may be, and not building bridges, is not Christian.”

Trump has said if elected president, he would build a wall along the U.S.-Mexican border to keep immigrants from illegally entering the United States.

Vatican spokesman Father Federico Lombardi told Vatican Radio the pope’s comments, in response to a reporter’s question on Trump, were an affirmation of his longstanding belief that migrants should be helped and not shut out. He said the pope believed people “should build bridges, not walls.”

“In no way was this a personal attack, nor an indication of how to vote,” Lombardi said.

Trump, who leads Republican candidates in opinion polls, lashed out on Thursday, dismissing the pope’s remarks as “disgraceful” for questioning his faith.

“If and when the Vatican is attacked by ISIS, which as everyone knows is ISIS’ ultimate trophy, I can promise you that the pope would have only wished and prayed that Donald Trump would have been president,” Trump said.

Later, during a television appearance, he rowed back, calling Francis “a wonderful guy.”

The extraordinary exchange between the billionaire real estate developer and leader of the world’s 1.25 billion Roman Catholics, which occurred days before Saturday’s Republican nominating contest in South Carolina, was headline news around the world.

On Friday, New York’s Daily News gave it the front page. Against a backdrop of an image of Trump, a headline blared: Anti Christ! The New York Post ran a front page photo of Trump and the pope wearing boxing gloves with the headline: Trump & pope: Bible belters.

It was unclear what, if any, effect the tussle might have on the vote in South Carolina, a conservative state that is home to many evangelical Protestant Christians.

Patrick Hornbeck, chairman of the department of theology at Fordham University in New York, said on Thursday that Francis’ words were not surprising given the poverty he had just seen in Mexico.

“There is very little common ground between Pope Francis and Donald Trump,” Hornbeck said. He predicted the pope’s words on electoral politics would have little effect on any U.S. Catholics who liked Trump as a candidate.

At a CNN town hall in Columbia, South Carolina, on Thursday night, Trump said he had “a lot of respect” for Francis but that the pope had been influenced by hearing only Mexico’s side of the border issue. The pope’s statement also had been exaggerated by the media, he said.

“I think he said something much softer than it was originally reported by the media,” Trump said.

Earlier on Thursday, Thomas Groome, director of the Boston College Center on the Church in the 21st Century, said Francis’ comments were entirely in keeping with his focus on mercy.

“The pope is commissioned to preach the Gospel of Jesus Christ. That’s his job,” Groome said. “So when he was asked a direct question, he gave Trump the benefit of the doubt, he said we have to be sure he said this, but if he said this, it is not Christian.”