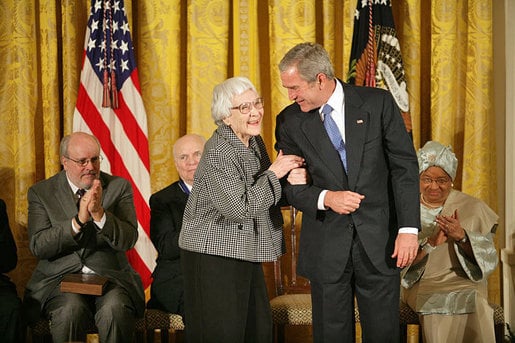 President George W. Bush awards the Presidential Medal of Freedom to author Harper Lee during a ceremony on Nov. 5, 2007, in the East Room.

Feb 19 (Reuters) – Harper Lee, who wrote one of America’s most enduring literary classics, “To Kill a Mockingbird,” about a child’s view of right and wrong and waited 55 years to publish a second book with the same characters from a very different point of view, has died at the age of 89.

Mary Jackson, the city clerk in Lee‘s hometown of Monroeville, Alabama, confirmed to Reuters by phone that the Lee had died.

For decades it was thought Lee would never follow up “To Kill a Mockingbird,” a Pulitzer-Prize-winning international best seller for decades. The July 2015 publication of “Go Set a Watchman” was a surprising literary event — as well as a shock for devotees of “Mockingbird.”

In the first book, Atticus Finch was the adored father of the young narrator Scout and a lawyer who nobly but unsuccessfully defended a black man unjustly accused of raping a white woman. But in “Watchman,” an older Atticus had racial views that left the grown-up Scout greatly disillusioned.

Lee reportedly had written “Go Set a Watchman” first but, at the suggestion of a wise editor, set it aside to tell a tale of race in the South from the child’s point of view in the 1930s.

Although sales of the second novel languished, it did not diminish popular admiration for Lee. Admirers were tweeting her praises and posting their favorite quotes.

“I wanted you to see what real courage is, instead of getting the idea that courage is a man with a gun in his hand”

Lee shunned public attention for decades after the film version of “Mockingbird,” starring Gregory Peck came out in 1962. According to USA Today, she made only one exception — writing occasional pieces fro Lee-loving Oprah Winfrey’s magazine and receive the 2007 Presidential Medal of Freedom from President George W. Bush in the White House.

The cover of “To Kill a Mockingbird,” published by HarperCollins

HarperCollins publisher Morrison said in a statement quoted by USA Today: “The world knows Harper Lee was a brilliant writer but what many don’t know is that she was an extraordinary woman of great joyfulness, humility and kindness. She lived her life the way she wanted to — in private — surrounded by books and the people who loved her.”

She went by Harper, her middle name, because she was afraid her first name, Nelle, would be mispronounced as “Nellie,” not “Nell.”

She based the “To Kill a Mockingbird” character Dill on childhood friend Truman Capote, who in turn used her as the basis for a character in his “Other Voices, Other Rooms.”