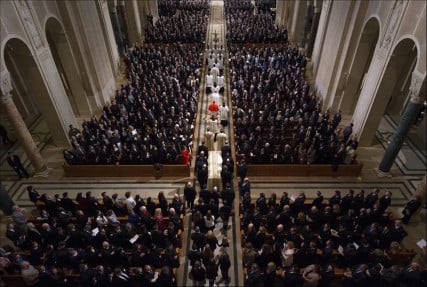 Pallbearers carry the casket down the aisle at the start of the funeral Mass for Associate Justice Antonin Scalia at the Basilica of the National Shrine of the Immaculate Conception in Washington, February 20, 2016. REUTERS/Doug Mills/Pool via Reuters

Rather than a star-studded funeral service featuring judges and politicians, Scalia’s sendoff at the Basilica of the National Shrine of the Immaculate Conception — the largest Roman Catholic church in North America — was a traditional Mass of Christian Burial befitting a true believer.

Scalia’s body, laying in a casket covered by a white-and-gold pall, led a procession to the altar with his family during the opening hymn of “O God Our Help in Ages Past.”

His son, the Rev. Paul Scalia, a Catholic priest from the Diocese of Arlington, Va., celebrated the Mass, along with Cardinal Donald Wuerl, the archbishop of Washington, D.C., Archbishop Carlo Maria Viganò, the Vatican’s ambassador to the United States and Pope Francis’ personal representative, and dozens of other bishops and priests.

“In keeping with your desire to have a simple parish family Mass,” Wuerl said in opening remarks, to muffled laughter, “I will confine my remarks to these few words of greeting and welcome to the many many people who are here in this magnificent basilica simply to express their respect for this extraordinary man, Justice Scalia.”

“Thank you also for allowing us to have this parish funeral Mass at this basilica dedicated to Our Lady,” Scalia’s son responded in his homily, which subtly acknowledged his father’s controversial legacy on the Supreme Court.

“We are gathered here because of one man. A man known personally to many of us, known only by reputation to even more. A man loved by many, scorned by others. A man known by man for great controversy, and for great compassion,” the younger Scalia said. “That man, of course, is Jesus of Nazareth.”

Catholic funeral Masses do not allow for eulogies by laypeople, and no such tributes were on the program. Instead, Scalia spoke of his father’s legacy — as a man of faith, if not the law — but also of his uncompromising temperament that became an essential part of his public image.

“God blessed Dad with a deep Catholic faith. He loved the clarity and coherence of the church’s teachings. He trusted the power of her sacraments as the means of salvation,” Scalia said.

One of those sacraments is confession, and Scalia told the story of the time his father somehow found himself in his priest son’s confessional one Saturday and quickly left. “As he put it later, ‘The heck if I’m confessing to you!’ ” Scalia said.

“The feeling was mutual,” he added, noting that “the Roman collar was not a shield against his criticism.”

A separate, more secular memorial service for family and friends will be held March 1 at the Mayflower Hotel in Washington, the Scalia family said Saturday (Feb. 20).

All the current Supreme Court justices attended, along with former justices John Paul Stevens and David Souter, sitting on folding chairs in front of the first pew.

Among the many judges in attendance was Sri Srinivasan of the U.S. Court of Appeals for the D.C. Circuit, perhaps the leading candidate among many President Obama may nominate for Scalia’s seat.

On Friday, more than 6,000 people paid their respects as Scalia’s body lay in repose at the Great Hall of the Supreme Court. The building remained open to allow everyone in line to get in.

The court’s longest-serving justice was a month shy of his 80th birthday when he was found dead last Saturday during a visit to a West Texas ranch. His death has touched off a harsh debate between the White House and Senate Republicans over Obama’s right to nominate a successor in the waning days of his presidency and the Senate’s right to ignore or defeat that nominee.

The president, who paid respects Friday as the late justice lay in repose in the Great Hall of the Supreme Court, later was seen carrying a binder with information about potential nominees for weekend reading. Sunday’s weekly news shows will reignite the debate amid talk of the South Carolina and Nevada presidential primaries.

For Scalia’s extended family and followers, however, Saturday loomed as a day to say goodbye to the man who was for many the leader among conservative legal scholars.

His defense of originalism (that is, reading the Constitution literally, not expansively) and textualism (reading government statutes the same way) changed the way cases were debated and, in some cases at least, won or lost.

The 79-year-old justice also will be remembered as one of the most gifted writers in the court’s history and a fierce debater from the bench who changed the nature of oral arguments. His many lectures, speeches and interviews helped to educate and energize younger generations of conservative legal thinkers who will carry on his legacy.

“He was brilliant. He never felt you were there to invent law from the bench, you were there to interpret. He was full of life and vigor. He lived life to the fullest,” said Dirk Kempthorne, who was sworn in by Scalia as Secretary of the Interior in 2006, before the funeral. “What a wonderful, delightful man. He was the epitome of life and did not take himself too seriously.”