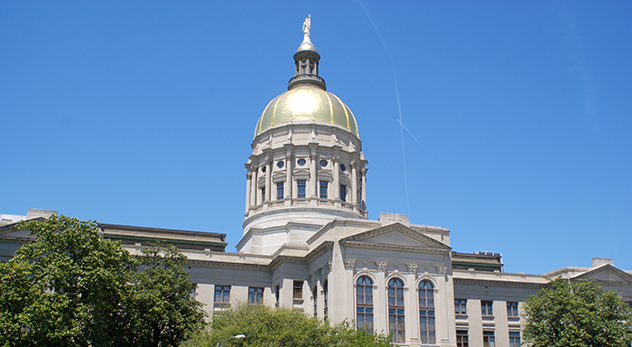 Opponents of religious freedom bills argue that these sorts of measures use protection language as a cover for legalizing discrimination of LGBT persons. - Courtesy of Atlegplorer (http://bit.ly/1QIeMss)

The Georgia Senate passed a religious freedom bill that critics say will allow businesses to discriminate against LGBT persons on the basis of sexual orientation. The bill is a combination of the Pastors Protection Act, which protects clergy from being forced to perform same-sex marriages, and the First Amendment Defense Act, which would allow taxpayer-funded organizations to deny goods and services to gays and lesbians. Georgia's governor Nathan Deal could sign the bill into law as early as next week.

But a new study of Georgians' attitudes on the matter shows that most residents of the Southern state are opposed to at least part of the bill. Roughly 66 percent of Georgia residents say that LGBT persons should be protected against discrimination in the workplace, public accommodations, and housing. This includes a majority of both Republicans and Democrats. Fifty-seven percent of Georgians also oppose allowing small businesses to refuse goods and services to LGBT persons due to religious convictions.

Similar bills in other states have also created controversy, and it's unclear whether Georgia's law accomplishes much except for paving the way for more discrimination of LGBT persons in a region where they already face heavy scrutiny. Similar legislation was passed in Indiana last year inciting backlash from organizations such as Apple, Walmart, and the NBA. The negative reaction was so great that Indiana's legislature and governor were forced to pass "fixes" to the bill. In Georgia, major corporations such as Atlanta-based Coca-Cola and the Hyatt hotel chain have already expressed displeasure with the legislation.

Twenty-one states have some form of religious freedom act already in place.

Opponents of religious freedom bills argue that these sorts of measures use protection language as a cover for legalizing discrimination of LGBT persons. Georgia's law, for example, claims to protect pastors from being forced to conduct same-sex weddings. But churches and clergy are already protected, and these sorts of legal exemptions for houses of worship are woven deep into our laws.

Consider that we are now many decades past the Civil Rights Movement and American pastors are still protected from performing interracial marriages if they choose. We have no reason to believe clergy face a significant threat when it comes to performing same-sex marriage ceremonies. I know of no pastor who has been forced to perform a marriage against his or her will. For this reason, nearly 300 Georgia pastors have signed a statement opposing the bill that states, "our freedom of religion is already guaranteed and protected by the U.S. Constitution and Georgia’s State Constitution."

The Georgia bill, however, is not completely without impact. It does seek to protect taxpayer-funded organizations from providing goods and services to gays and lesbians. And here is where the rub comes. I've vocally opposed the "rights" of small businesses to refuse goods and services to LGBT persons. As many have argued, we are not a nation of two water fountains. Additionally, these kinds of marketplace precedents could actually come back to hurt the faithful. So, yes, conservative Christian baker, you should have to bake the cake if you want to bake cakes in America.

But the Georgia bill affects more than just small businesses. It seeks to protect "taxpayer-funded" organizations, which can include religious institutions. For example, it seeks to protect conservative Christian adoption agencies that refers LGBT clients to other agencies due to religious convictions. Without these protections, such organizations may be at risk of losing their government contracts and no longer be able to provide crucial services, such as foster care placement. Unlike the pastoral protections, this threat is real and there is precedent.

Sadly, conservative Georgia legislators overplayed their hand and tried to accomplish too much with this bill. Surely organizations such as Catholic Charities, who have a proven record of providing services that promote the common good, should be able to continue operating as they have for decades. But these kinds of protections can be secured without placing LGBT persons at risk of discrimination in the marketplace. The current bill is both a mixed bag and missed opportunity.