Miriam Araujo, 25, caresses Lucas, her 4-months old child born with microcephaly as he sleeps on a hammock inside their house, in Sao Jose dos Cordeiros, Brazil February 16, 2016. Photo courtesy REUTERS Ricardo Moraes *Editors: This photo may only be republished with RNS-BRAZIL-OB/GYN, transmitted on Feb. 26, 2016.

RIO DE JANEIRO (RNS) Dr. Olimpio Moraes is used to being at the center of controversy. He’s been excommunicated twice by Brazil’s Roman Catholic Church for actively supporting abortion.

Recently, the obstetrician has thrown his weight behind a civil rights campaign preparing to launch a legal challenge for the rights of pregnant women to abort fetuses with the Zika virus-linked microcephaly.

The abortion-rights lobby has won support from Católicas Direito de Decidir (Catholic’s Right to Decide) a nongovernmental Sao Paulo-based women’s organization. This week it called on its 33,000 Facebook members to “take to the streets” on March 8, International Women’s Day, to protest and raise awareness of the need to protect women in a country where abortion is a crime.

When Moraes was excommunicated, he had been a practicing Catholic. The first time, in 2006, the church said it was censuring him for promoting the distribution of the morning-after pill during Carnival, the period of public revelry the week before Lent in Roman Catholic countries.

Three years later, the church condemned him for performing an abortion on a 9-year-old girl who was raped by her stepfather and impregnated with twins. The church also excommunicated the girl’s mother but not the rapist.

Legislation in most Latin American nations allows for termination of a pregnancy in cases of rape; when a woman’s life is in danger; and in cases of anencephaly, where a baby develops without a brain.

Moraes, 54,  is consulting the abortion-rights camp and said he now rarely goes to church and has lost his faith.

“My exclusion meant I could not participate in religious sacraments,” he said. “Instead it has led me to question eternal life and whether there is a God. My medical commitment has always been about having compassion, understanding suffering and showing respect for a woman’s right to choose what happens to her body.”

His wife and three children continue to be practicing Catholics.

Brazil is grappling with unprecedented levels of babies born with the serious birth defect that stunts the normal growth of a fetus’s head and brain during the early stages of development and causes neurological abnormalities and developmental delays.

Earlier this month, the World Health Organization declared the Zika virus and its suspected link to microcephaly a global public health emergency, with Brazil at the epicenter of the crisis.

Recent WHO figures confirm that Zika, which is carried by the Aedes aegypti mosquito, has swept across the world, affecting around 46 countries, with concern growing for some 3,000 women in Colombia who were infected with the bug during the early months of pregnancy.

Figures released by Brazil’s health ministry on Tuesday (Feb. 23) showed 583 confirmed cases of children born with microcephaly and 4,107 under investigation.

The government has implemented a host of social and environmental measures to tackle the accelerating health epidemic.

But with Brazil suffering one of the worst economic downturns in its history, public health facilities are overstretched and underfunded. 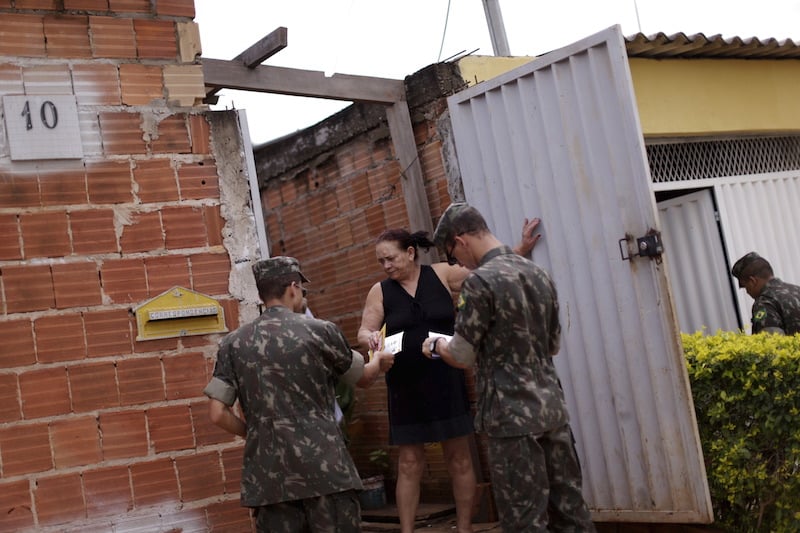 Brazilian soldiers hand out flyers as part of an awareness campaign to fight the Aedes aegypti mosquito in the Sao Sebastiao neighbourhood in Brasilia, Brazil, February 15, 2016. Photo courtesy REUTERS/Ueslei Marcelino *Editors: This photo may only be republished with RNS-BRAZIL-OB/GYN, transmitted on Feb. 26, 2016.

Moraes is director of the Amaury de Medeiros Center for Integrated Health Care in Recife, the capital of Pernambuco. It was in this northeast coastal region that the Zika outbreak first started, and where 209 babies with the congenital deformity have been born. This figure is the highest in the country.

The virus spread rapidly through dozens of Pernambuco’s impoverished urban centers in early 2015, aided by poor sanitation and squalid conditions.

“The ones who are suffering the most are the poor and black women who cannot afford to pay for an abortion and who live on the periphery without basic health conditions,” said Moraes, who is also the Northeast vice president of Brazil’s Federal Association of Gynecologists and Obstetricians.

In a country where women can serve up to three years in jail if found guilty of deliberately interrupting a pregnancy, research by WHO reveals an estimated 800,000 clandestine abortions annually in Brazil, with 15 women dying from botched operations each month.

According to Moraes, colleagues working in the private sector have seen a marked increase in the numbers of middle-class women paying to terminate a pregnancy in which microcephaly has been diagnosed in the fetus.

Dr. Jose Paulo Pereira, head of obstetrics at Oswaldo Cruz Foundation in Rio de Janeiro, sees it differently. Since January, he’s seen 10 new cases of women expecting babies with microcephaly, but only one considered an abortion.

“I know people are thinking about trying to change the law, but I believe this will never happen in our country,” Pereira said. “My responsibility is for the child and I always advise a woman termination is against the law.”

With the abortion debate continuing to gather steam, evangelical church leader César Augusto of the Source of Life Church in Goias, central Brazil, advised women last week to avoid becoming pregnant, while Cardinal Odilo Scherer, the Roman Catholic archbishop of Sao Paulo, told women in a BBC interview to “view (babies with microcephaly) as a mission.”

That advice outraged the Catholic’s Right to Decide group, which issued a statement saying: “Faced with the serious health situation in the country … the public statements by the Catholic hierarchy have revealed, once again, the misogynist character of the institution.”

Dr. Regina Soares Jurkewicz a physician and the coordinator of the group, added: “Why is it the church continuously puts all the responsibility on the women and the government cuts funding to social areas, leaving women to fend for themselves and penalizes them by denying them the right to decide what they do with their body?”

But weighing heavily against those arguing for abortion is the medical dilemma that makes it difficult to diagnose microcephaly within the first 12 weeks of pregnancy.

In addition, Brazilian lawmakers have drafted a bill that introduces extra examination procedures for rape victims and penalizes health professionals who assist in the abortion process.

Religion is a dominant force in this nation of 204 million people. According to a 2010 Brazilian Institute of Geography and Statistics census, Christians make up 87 percent of the population. Of that, Catholics make up 65 percent and evangelicals 22 percent.

This deep-seated belief system was reflected in a Datafolha survey published in December last year. The Sao Paulo-based research group found that 67 percent of Brazilians favored keeping abortion illegal; 16 percent wanted to expand the circumstances in which it is allowed; 11 percent favored decriminalization of abortion.

The results of this opinion poll, coupled with the current political climate, give some indication of the uphill battle abortion-rights advocates face in Brazil.

“I believe it is particularly important for the medical profession to remember,” said Moraes, “that ultimately we are not the ones facing a lifetime of difficulty bringing up a child born with microcephaly.”

(Janet Tappin Coelho is an RNS correspondent based in Rio de Janeiro. Reach on Twitter @JTCoelho)