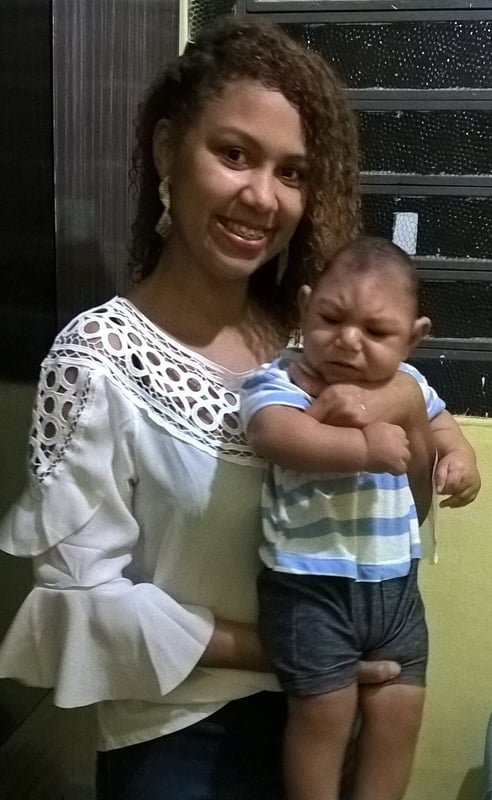 RIO DE JANEIRO (RNS) During the first few months of his young life, Erick Ferreira suffered multiple seizures. The convulsions left his tiny body exhausted, but as soon as the fits subsided, the baby, now 7 months old, would look at his mother and smile.

“That’s when I knew God had chosen me to be his mama and God was in control of the reason for this illness,” said Erika Roque, 30, who believes her evangelical faith is supporting her through one of the most difficult trials in her life.

Erick has microcephaly, the disfiguring condition that leaves children with undersized heads and smaller brains. The disability is linked to the alarming outbreak of the Zika virus in Brazil. Mounting evidence suggests the mosquito-borne disease is responsible for the congenital birth defect after scores of women in Brazil were infected by the bug in the early stages of pregnancy.

Over 400 babies have been born with microcephaly in the last three months in this South American country, with 3,670 suspected cases under investigation. In comparison, from 2010 to 2014 Brazil registered an average of 156 cases a year.

Since January, the disease has spread beyond Brazil’s borders and is rampaging across the Americas, infecting an estimated 3 million to 4 million people.

The surge in microcephaly cases in Brazil has reignited a debate on abortion and the reproductive rights of women in Latin America, where the majority of countries have a historical predominance of Roman Catholicism.

Abortion is illegal in Brazil, with women facing up to three years in jail if convicted of having had one. Exceptions apply in cases of rape; where the pregnancy poses a risk to the mother’s life; or, under a 2012 ruling, if a fetus has anencephaly, in which a major part of the brain and skull is missing.

Earlier this month, the United Nations added fuel to the fire by calling for women to have access to contraception and abortion in countries hit by the Zika virus. The call came after some Latin American countries advised women to avoid getting pregnant yet maintained the ban on the morning-after pill and abortion.

“How can you ask women not to become pregnant, but do not offer the possibility of preventing a pregnancy?” asked Cecile Pouilly, the U.N.’s human rights spokesperson.

Brazil’s health minister, Marcelo Castro, said Tuesday (Feb. 9) that the government’s position remains clear and is “unequivocally in defense of the law,” which does not allow for abortion due to microcephaly.

Civil liberty advocates are nevertheless preparing to petition Brazil’s Supreme Court for the right of women to abort if microcephaly is detected in an unborn child.

“Women should not be forced to go through with a pregnancy where serious birth defects are still not fully known,” said Debora Diniz, professor of anthropology at the University of Brasilia who is spearheading the right-to-terminate campaign. “They should not be penalized for a government’s failing policies because it has been negligent in the handling of an epidemic.”

Diniz said the central tenets of the campaign’s argument rest with women having the right to choose whether to have the child, and the right to specialized prenatal care and social assistance if they choose to carry the unborn child to term.

Cardinal Sergio da Rocha, archbishop of Brasilia, criticized the proposal to decriminalize abortion in cases of microcephaly. He said groups advocating abortion had “a total disregard for the gift of life.”

“The increase in cases of the condition in infants cannot be used as a justification for termination of pregnancy,” he said.

But while the debate is raging, the number of cases of women illegally ending a pregnancy because they suspect they are carrying a child with microcephaly is rising, according to the Folha de Sao Paulo journal.

Roque, who lives in Recife, the capital of the northeastern state of Pernambuco, where the highest numbers of babies with stunted head growth have been born, discovered her baby had the condition on the day she gave birth.

Her reaction is an indication of just how difficult it might be for Brazilian reproductive-rights champions to fight the prevailing cultural norms that view abortion as a sin.

“Even if I had been warned in a scan during my pregnancy that Erik would be affected like this, I would never have considered aborting him,” she said.

In an effort to fight the epidemic, Brazilian President Dilma Rousseff has launched a series of initiatives, one of which includes calling on all religious denominations to join the nationwide mobilization to eradicate the Aedes aegypti, the mosquito that carries the virus.

The government wants religious communities, especially in remote areas, to help educate people on how to fight the spread of the disease.

Last week the Catholic Church confirmed it was backing the government’s campaign against the Zika virus.

After a meeting with Rousseff, Rocha said: “We are aware that the church has much to contribute in mobilizing and training people and helping communities to take the necessary initiatives to reduce this problem as soon as possible.”

As Protestant churches weigh their options, some Brazilian Baptists are now saying they would favor the right to an abortion where microcephaly is diagnosed.

“This is an urgent issue that needs to be discussed now in a very democratic and open way,” said Baptist pastor Joel Zeferino of Pinheiro, near Natal, in northeast Brazil. “Above all the debate must include women on the outskirts of our cities, black women and poor women in particular. They are the ones who are actually having these illegal abortions. We need to empower these women with voices so they have their say as many don’t access to even basic health rights.”

The lack of health care support is an ongoing concern for Roque. Erick’s abnormally small skull means he faces an uncertain future and a lifetime of specialist care. He suffers from impaired cognitive development, difficulties with coordination and balance, delayed motor functions and other neurological ailments.

Medication has brought his convulsions under control.

“It broke my heart each time to watch helplessly as the fits racked his little body, but his resilience has kept me going and is helping to make me strong,” Roque said.

“People think this is the worst thing that could happen and feel sorry for you. That’s not how it works in my case,” she said. “Erick’s arrival is the best thing in the world for me.”