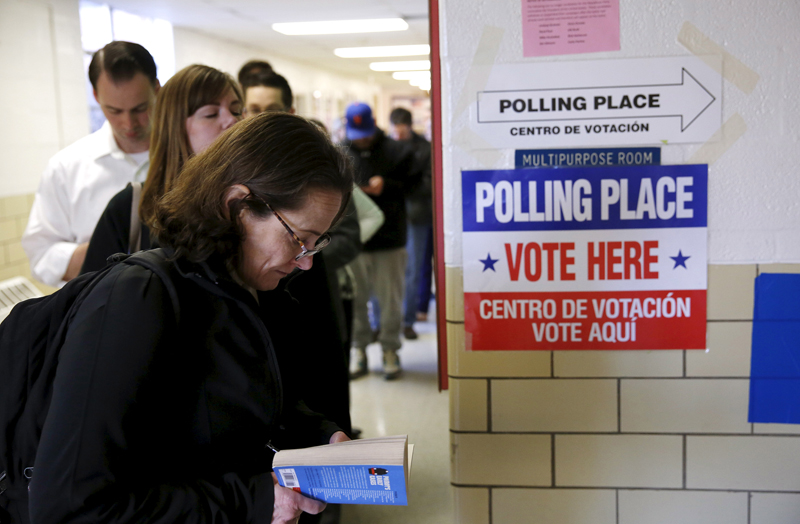 Voters line up early to cast their ballots in Super Tuesday elections at the Wilson School in Arlington, Va., on March 1, 2016. Photo courtesy of REUTERS/Gary Cameron
*Editors: This photo may only be republished with RNS-SUPER-TUESDAY, originally transmitted on March 1, 2016.

Perhaps it’s the majority of evangelical Protestants among the Republicans voting in several of the 12 states holding their primaries and caucuses Tuesday (March 1). That includes Oklahoma (56 percent), Georgia (57 percent), Alabama (63 percent), Arkansas (61 percent) and Tennessee (a whopping 67 percent), according to the Pew Research Center.

Nearly half of all Republicans in Super Tuesday states identify as evangelicals, it said.

Meantime, people with no religious affiliation are the largest group (25 percent) voting Democrat in the 11 states voting Tuesday. That includes 50 percent of Vermonters and the largest group of voters in Colorado and Massachusetts, according to Pew. 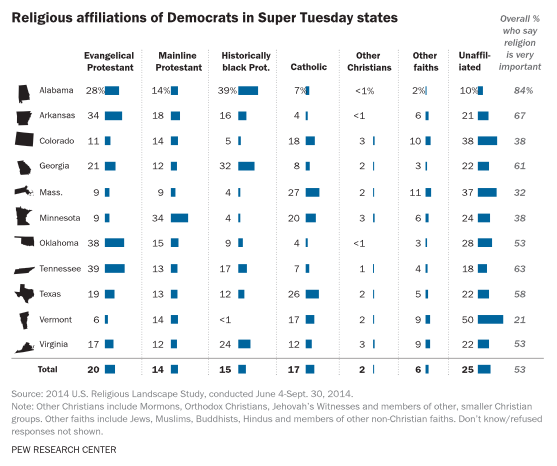 So what does that tell us about how those states will vote?

“One of the big themes in the research is that people are looking for a type of protection,” said David Kinnaman, president of the Barna Group. “They’re trying to find some kind of safety and security in a world that feels like it’s slipping away.”

Republicans tend to place more importance on religion than Democrats, according to Pew. The GOP is the party that has been more connected to people of faith, more oriented around theological conservatism, said Kinnaman, co-author of “Good Faith: Being a Christian When Society Thinks You’re Irrelevant and Extreme.”

Pew data back that up: Two-thirds of Republicans in Super Tuesday states say religion is very important to them, compared with 53 percent of Democrats.

READ: Why the pope is right and Russell Moore is wrong about the death penalty (COMMENTARY) 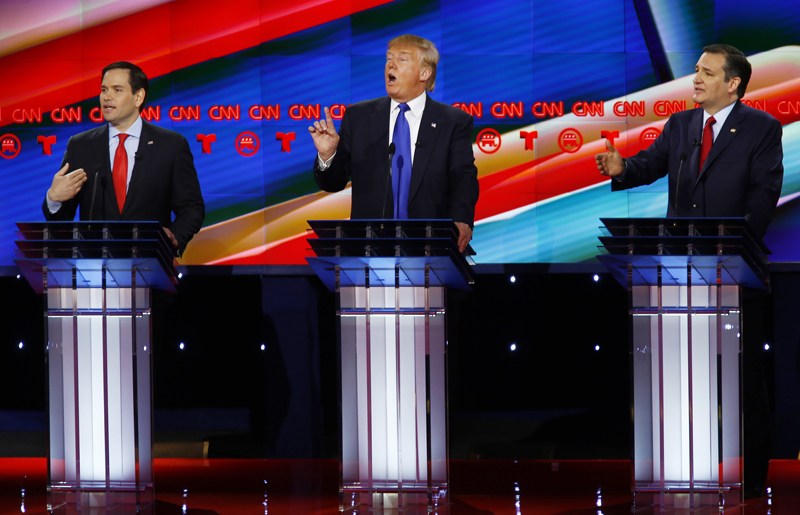 Left to right, Sen. Marco Rubio, Donald Trump and Sen. Ted Cruz speak at the Republican presidential debate sponsored by CNN in Houston on Feb. 25, 2016. Photo courtesy of REUTERS/Mike Stone
*Editors: This photo may only be republished with RNS-SUPER-TUESDAY, originally transmitted on March 1, 2016.

Kinnaman draws a line between those who describe themselves as evangelical in polls and those who meet theological criteria defined by Barna, affirming “a personal commitment to Jesus Christ that is still important in their life today.”

Republican candidate Donald Trump has polled well among evangelicals and “seems poised to win many if not all of the states,” he said.

But, he said, “Highly religiously oriented voters are looking for (Sen. Ted) Cruz to come alongside them and bolster their sense of worldview.”

It also will be significant to see whether Cruz and Sen. Marco Rubio –- who, Kinnaman said, are “neck and neck” behind Trump –- can separate themselves from each other.