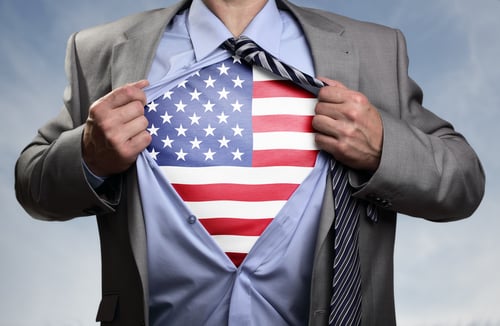 It's Super Tuesday. Let's say, for argument's sake, that you -- like me and a goodly number of other Americans, including many American Christians -- stand in mute, terrified incomprehension before the very idea that the majority of voters in multiple states will choose Donald Trump as their candidate for president.

Perhaps it is another candidate who fills you with such dread. Fill in your terrifying candidate as you will, but think with me for a second about what it means to look around and find yourself a stranger to many millions of your own fellow countrymen. You literally do not understand how they could possibly make the choice they are making, given the available information and alternatives.

What happens when you don't feel at home in your own country anymore?

This is a very interesting question, and one to which the Bible and historic Christian faith have some very profound answers.

Even a cursory reading of the New Testament shows that the earliest Christians were in many ways the most remote of moral strangers to their neighbors in first century Greco-Roman culture. Both sides knew it. They were just fundamentally different. The Christians were taught to see it as an opportunity for their faithfulness to Christ to be tested, and their mission for Christ to be advanced. They belonged to a different city, a city whose builder is God, a city to which they were journeying by faith (Hebrews 11:10-16). Meanwhile they were only resident aliens in this world, despised and misunderstood by their neighbors, neighbors they were in all cases called to love and serve.

The Duke Divinity School theology professor Stanley Hauerwas has for a generation been calling American Christians back to a recognition of our status as resident aliens in this culture and in the world. He has argued that American Christians are often more American than Christian, more fluent in liberal democracy than in Christian practice. He has criticized many generations of pastors and theologians who have contributed to the confusions of laypeople who have become unable to distinguish between their American and Christian identities. He has said most emphatically that we Christians are not at home here. But, in America as in many other historically "Christian" countries, national and religious identities, at least among the privileged majority, have long been fused. This was "Christendom," and for many Christians, it became second nature to think in Christendom terms.

That American Christendom mentality has extended to our general confidence in America and its institutions. We joined with our neighbors in expressing confidence in the greatness of our Constitution and political system. We believed in the basic goodness of America and the American people. We felt confident that though bad times might come, our political system and national culture would find a way to self-correct. We felt at home here, with a sense that though the nation is flawed it is generally admirable, a better place to live than most anywhere else. In other words, we believed what politicians told us with every inaugural address. We were proud to be Americans, and most days we saw no fundamental contradiction between our American and our Christian identities.

Being shaken to the roots by the craziness of this political moment is revelatory. We should have known better than to trust any country's goodness. We have had Professor Hauerwas and his ilk whispering in our ear, "Christians, if you are New Testament people you should never have felt at home in America in this way." And we have had access to black and brown neighbors who could have told us, in James Cone's words, about an American nightmare and not just an American dream -- people who have known the shadow side of America, its hypocrisy, injustice, racism, and violence. But because their nightmare was not our experience we hardly noticed their suffering.

The next move for some who accept this overall analysis is to withdraw to their religious enclaves and shut out the viciousness and vulgarity of America as best they can. I think the harder path is actually the right one -- to remain engaged, to vote and speak our conscience, to try to prevent the worst, to protest in principled terms, come what may -- if not on behalf of our old illusions, then on behalf of those most likely to be harmed by a particularly disastrous turn in American government.

So, no retreat. But no more illusions. America is sick to the core, the sickness has infected many self-identified Christians, and it is unveiled and on the march these days. There is much to repent, and America's privileged Christians should be the first to do so. The best form of repentance is action.